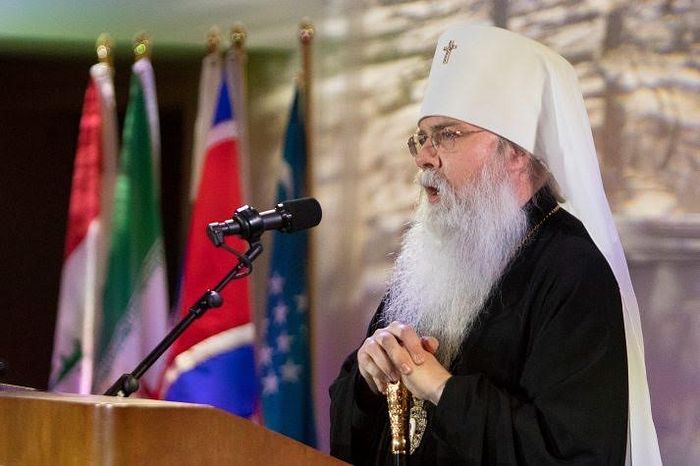 The “Martyrs for Christ” World Summit in Defense of Persecuted Christians is currently underway in Washington, DC. The conference, gathering Christian leaders from 100 countries around the world to discuss issues surrounding the mass persecutions of Christians currently plaguing the world, is being held by the Billy Graham Evangelistic Association from May 10 to 13.

Among the guest speakers are His Beatitude Metropolitan Tikhon, primate of the Orthodox Church in America, and His Eminence Metropolitan Hilarion, head of the Moscow Patriarchate’s Department for External Church Relations.

Christians in more than 60 countries face persecution from their governments or surrounding neighbors simply because of their belief in Jesus Christ, according to the United States Department of State. This abuse can include beatings, physical torture, imprisonment, severe punishment, isolation, rape and even death.

Franklin Graham, son of Billy Graham and head of the evangelistic association, previously met with both Met. Hilarion and His Holiness Patriarch Kirill during a trip to Moscow in October 2015, at which they discussed holding such a world summit to raise awareness about the persecution of Christians.

“I was in Russia this past October and met with Patriarch Kirill, the head of the Russian Orthodox Church, and evangelical leaders, and we discussed at length the persecution of the Church worldwide," Graham wrote in a Facebook message March 9, 2016, explaining the roots of the summit, which was initially planned to be held in Moscow in October, 2016, later being moved by the Russian Church’s suggestion.

Met. Tikhon was honored to offering the opening remarks of the summit on May 10, in which he emphasized the Christian’s calling to participate in the Resurrection of Christ and acquire the Holy Spirit through humility and patience:

During this season of the resurrection, I greet all of those who have assembled from the ends of the earth for this World Summit in Defense of Persecuted Christians and welcome you to Washington DC on behalf of the Orthodox Churches in the United States of America, a nation which has a long history of welcoming those fleeing religious persecution...

This Summit takes place during the season of the resurrection of Christ, in which we celebrate the victory of the Life-giver over death and the destruction of corruption by the Divine Physician. As Christians, we participate in this victory and this destruction not by the external imposition of force and violence upon others, but rather through our struggle to attain the love of Christ in the Holy Spirit, which is accomplished through humility and patience.

His Eminence Met. Hilarion delivered the summit’s keynote address during a plenary session on May 11, in which he reminded all those gathered that we know from the Lord Himself that we will be persecuted as Christians, which is evident from the 2,000-year history of the Church. “The twentieth century has highlighted with particular poignancy the price Christians have had to pay for their faith,” Met. Hilarion noted, citing examples from throughout the entire world. 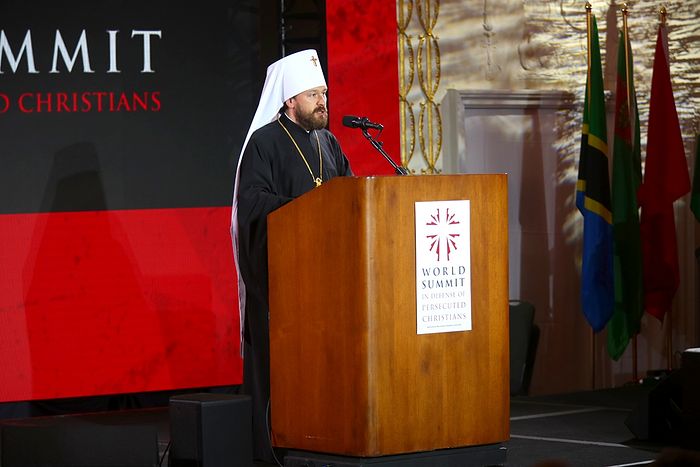 2017 is an especially appropriate year for Russian Christians to participate in such a summit, as they are remembering the centenary of the bloody revolution that led to the persecution and slaughter of millions for their faith in Christ. “In the persons of Lenin and Stalin, the authorities initiated repression unprecedented on its scale against their own people. Tens of millions were its victims… The Church gave to the world a great multitude of saints who, as the apostle says, were tortured, not accepting deliverance; that they might obtain a better resurrection: And others had trial of cruel mockings and scourgings, yea, moreover of bonds and imprisonment (Heb 11:35-36),” the bishop noted.

The twenty-first century is also a time of great persecution in the Middle East, Africa, Asia, and elsewhere, as Met. Hilarion noted, emphasizing the Russian Church’s dedication to helping persecuted Christians throughout the world, and especially in Syria at the moment.

He called upon representatives of the various Christian confessions gathered, and beyond, to not remain dormant in the face of the suffering of Christians throughout the world, and encouraged and emphasized inter-Christian efforts towards protecting persecuted Christians and bringing an end to persecution.

“We can do many things together,” the chairman of the Moscow Patriarchate’s Department for External Church Relations said in conclusion, “The attention of the world is now focused on our summit. The united voice of the Christian confessions must bear witness to our solidarity with our persecuted brothers and sisters, and call upon the world community to intensify its efforts in combating extremism, terrorism and Christianophobia.”

The World Summit in Defense of Persecuted Christians will continue its work until May 13. The conference organized by the Billy Graham Evangelistic Association brought together 800 participants from over 135 countries. Metropolitan Tikhon discusses persecution of Christians with Billy Graham Association representative
During the course of the meeting, the Rev. Hamm extended an invitation to Metropolitan Tikhon to attend and address the World Summit in Defense of Persecuted Christians, slated to convene in Washington, DC May 11-13, 2017. Anthony5/12/2017 10:36 pm
“We can do many things together,” the chairman of the Moscow Patriarchate’s Department for External Church Relations said in conclusion, “The attention of the world is now focused on our summit. The united voice of the Christian confessions must bear witness to our solidarity with our persecuted brothers and sisters, and call upon the world community to intensify its efforts in combating extremism, terrorism and Christianophobia.”

Such empty vacuous words. Like those spewing forth from the mouths of politicians. Sorry what do they hope to achieve. Nothing. Let voices be heard. And? What? Are the muslims going to stop their slaughter. No. Is the west going to stop sponsoring terrorism in the ME? No. Seems like an underhanded attempted at ecumenism more than anything else. Oh and I can assure his dear eminence that the world does not give a hoot about this summit. If the Church leaders and their schismatic friends wanted to do something gracious, maybe they could have donated the money used to fund this panigiri - festival to the suffering Christians instead.
×