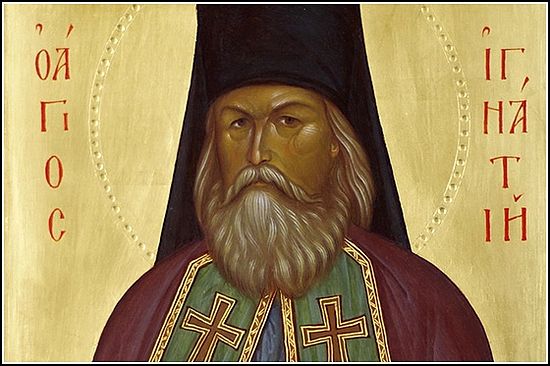 St. Ignatius (Dimitry Alexandrovich Brianchaninov in the world) was born on February 5, 1807 on his father’s estate in the village of Pokrov in the Vologda Province. His mother gave birth to him after a prolonged infertility, by her fervent prayers and travels to the surrounding holy places. The boy spent his childhood in the solitude of village life; from his earliest years he was inexplicably attracted to the monastic life. His religious temper appeared all the more noticeably with age, being manifested in a special disposition towards prayer and the reading of spiritual books.

Dimitry performed admirably in school, and remained the top student in his class until graduation. He had a diverse array of abilities—not only in the sciences, but in painting and in music. Family ties led him to the house of the president of the Academy of Arts, A. N. Olenin, where he became a favorite reader at literary parties, and was soon acquainted with A. Pushkin, K. Batiushkov, N. Gnedich, and I. Krilov. But even in the hustle and bustle of city life Dimitry’s spiritual aspirations did not change. In search of “eternal property for eternal man,” he gradually came to a disheartening conclusion: The value of science is limited by man’s earthly necessities and the limits of his life.

Dimitry studied science so zealously that he was accepted to study ancient and modern philosophy, trying to calm his spiritual vexation, but he found no resolution there to the most important question of Truth and the meaning of life. The study of Sacred Scripture was his next step, which convinced him that, as any man could offer an arbitrary interpretation, Scripture could not be a sufficient criterion for the true faith and could even thereby tempt with false teachings. Then Dimitry turned to studying the Orthodox faith by the writings of the holy fathers, whose sanctity and miraculous and magnificent harmony became for him a guarantee of their truthfulness.

Dimitry Brianchaninov attended services at the St. Alexander Nevsky Lavra and found true mentors there who understood his spiritual needs. The final upheaval in his life led to an acquaintance with Elder Leonid (later Hieromonk Lev of Optina). Dimitry Brianchaninov left the glitter and riches of the aristocratic life, and, causing deep bewilderment from “the world” and the dissatisfaction of his parents, he retired in 1827. Having been a novice in several monasteries, he received the monastic tonsure with the name of Ignatius in the secluded Dionisievo-Glushitsky Мonastery.

In January 1832, Hieromonk Ignatius was appointed to build the Pelshemsk-Poltava Monastery in the Vologda Province, and in 1833 was elevated to the rank of igumen of the monastery. Soon Emperor Nicholas I called St. Ignatius to St. Petersburg; by the highest recommendation and by directive of the Holy Synod, he was elevated to archimandrite and appointed as abbot of St. Sergius Hermitage.

Living at St. Sergius Hermitage for twenty-four years, Archimandrite Ignatius guided it into a state of flourishing. On October 27, 1857, he was consecrated as bishop of the Caucasus and the Black Sea. He arrived in Stavropol the following year where he was faced with much arduous work, but became seriously ill with smallpox, which impeded his labors. The bishop decided to ask for retirement in 1861 and settled in Nikolo-Babaevsky Monastery. There, free from pastoral duties, he gave all his time until the end of his life (1867) to the composing of spiritual works. Exhortation on the Prayer Rule

Exhortation on the Prayer Rule
St. Ignatius (Brianchaninov)
Before His Passion at the cost of which the salvation of the human race had to be bought the Lord went to pray in the secluded Garden of Gethsemane. There the God-Man kneeled down and prayed; and being in agony, He prayed so earnestly that His sweat was as it were great drops of blood falling down on the ground. Homily on the Sunday of the Samaritan Woman. On Worshipping God in Spirit and in Truth
St. Ignatius (Brianchaninov)

Homily on the Sunday of the Samaritan Woman. On Worshipping God in Spirit and in Truth
St. Ignatius (Brianchaninov)
Beloved brethren! Today we have heard in the Gospel that the true servants of the true God worship Him in Spirit and in Truth, and that God seeks, that is, He desires to have such worshippers. If God desires to have such worshippers, then it is obvious that he will receive only such worshippers and servants, and they only are pleasing to Him. This teaching was imparted to us by the Son of God Himself. Preparation for the Sacrament of Confession
St. Ignatius (Brianchaninov)
I will say of them what has already been said of them; I will pronounce the sentence that was already pronounced. I will say it with bitterness of heart, but without mistake, because I am merely repeating the Apostle’s words, the words of God. The widow that liveth in pleasure is dead while she liveth (1 Tim. 5:5-6). Do not think that these words are directed only at widows according to the flesh! No, they apply even more succinctly to me and you, who have renounced the world to serve Christ.
Comments
×