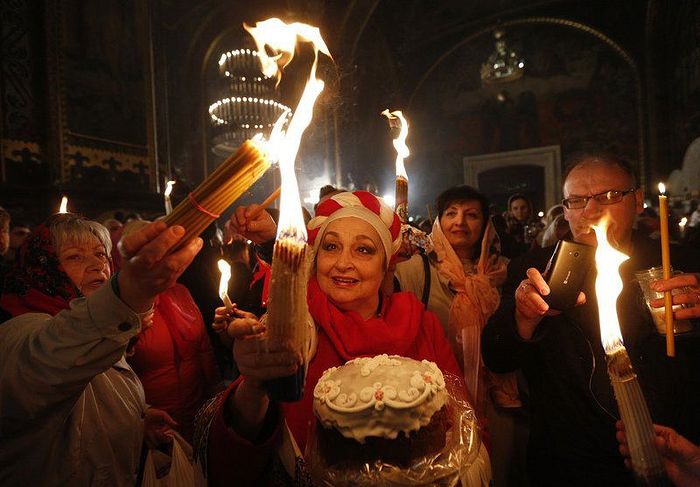 Ukrainian Orthodox worshipers light candles from the Holy Fire brought from Jerusalem in St. Volodymyr Cathedral during the April 15 ceremony of the Holy Fire in Kiev, Ukraine. Photo: AP/Sergei Chuzavkov

Each year, thousands of Christians gather at the Church of the Holy Sepulcher in Jerusalem to witness a miracle that sparks a flame of faith they share with believers around the world.

The members of St. Nino Equal to the Apostles Orthodox Christian Church in Stillwater are sharing in that miracle this year.

It begins in a unique church complex located in the Old City of Jerusalem that surrounds two of the holiest spots in Christianity: Golgotha, the hill where Jesus of Nazareth is said to have been crucified and the rock tomb where he was buried.

The Holy Fire is said to appear miraculously in the tomb of the resurrected Jesus each year on the Saturday before Pascha or Easter, as celebrated according to the Orthodox calendar.

The Patriarch of Jerusalem, one of the leaders of the Eastern Orthodox Church, enters the tomb, prays and waits until the Holy Fire manifests itself on the stone where the body of Jesus was wrapped.

The faithful light candles from the flame to carry to their homes and churches. They say the flame doesn’t burn when you touch it for about the first 30 minutes and photos taken in the Church of the Holy Sepulcher show smiling people holding their faces and hands in the flame.

The flame then begins its journey around the world. Holy Fire successfully delivered to New York and London this year
The Holy Fire was brought to America and England by the St. Andrew the First-Called Foundation and the Imperial Orthodox Palestine Society for the first time this year. Holy Fire has descended in Church of Holy Sepulchre in Jerusalem
After the fire’s descent the Patriarch passed the holy gift to the faithful who lit from it their bundles of thirty-three candles, per the age of Christ.
Comments
×