Christ is Risen! Part 7a. Subtle Differences Between East and West

See Christ is Risen! Part 6b. The Resurrection of the Body

Before continuing with her discussion of 1 Corinthians in her seventh and last podcast on Christ’s Resurrection, Dr. Jeannie Constantinou discusses some of the subtle differences between the Eastern and Western understandings of doctrine. 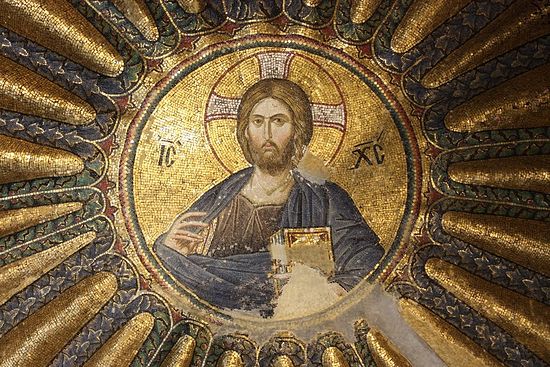 Mosaic of Christ Pantocrator, The Church of the Holy Saviour in Chora. Photo: Panoramio


Christ is Risen from the dead, trampling down death by death, and upon those in the tombs bestowing life.

Well, this will be our last podcast on the Resurrection dear brothers and sisters; I talked much longer than I expected. I was anticipating three or four podcasts, but I think it was good that we didn’t rush through the Resurrection because of its paramount importance and because of these beautiful texts and concepts that we had the opportunity to discuss. And we were able to really enjoy this period of the Church year. Well, first of all, I want to tell you that the votes are in. Those of you who wished to share your opinion with me, most of you, the vast majority, said that you preferred that we discussed any questions in the beginning as opposed to the end, and I will try to do that and then we’ll also try to keep them brief. A couple of people who said they prefer it at the end said that they thought it could be distracting, and that’s true, if it’s very long. I will try to keep the answers to your questions brief. When I do answer briefly, sometimes I end up in trouble because people say, “Why would you say that?” Sometimes it’s better not to try to say things quickly, especially when you’re discussing theological topics, such as what we were talking about a couple of weeks ago about atonement and sin etc., because these are very deep concepts and we need to take time and explain them carefully.

I don’t think I should ignore these questions or any other theological questions that arise during this podcast. At the same time, however, I want you to understand that this is a Bible study. So if you don’t understand what I’m saying, or you disagree with me, this is an area for you to do a little bit of further investigation and see if what I was saying was correct. Let me give you an example. Something happened last Sunday. I was in church and I was singing the Doxology along with the choir. This is sung at the beginning of every Divine Liturgy in the Orthodox Church,1 and this is very similar to the “Gloria”, which is what Catholics know in their Masses. They don’t always say it. But ours is called the “Doxology”,2 and is longer. And I was thinking that this had to do with the listener’s question about how the Orthodox are more likely to think of sin as an illness that required healing rather than a violation of law or a crime; and the question was, how can we say this when we’re constantly asking God for mercy? In the “Doxology” there are a few requests for mercy, and then there’s this line that says, “I said, Lord, have mercy on me, heal my soul for I have sinned against you.” So you see? There’s an example of how mercy is understood, to be asking for healing: “Heal my soul.” “Lord have mercy on me, heal my soul.” So that’s an example. 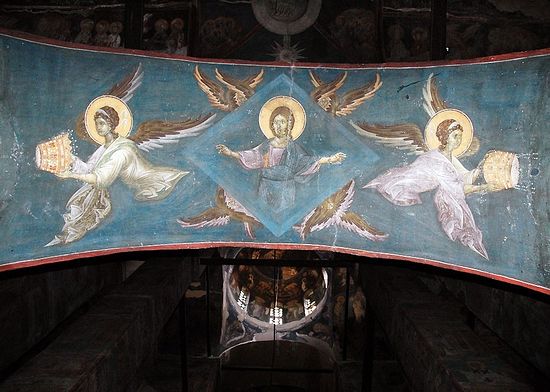 Of course, any time I’m trying to draw these distinctions for you between the East and the West you must understand that sometimes they are very subtle, and I try to explain it in a way that makes it clear to you. I’m not trying to over-exaggerate any distinctions, but they are there. There is a difference in Orthodoxy, because we did not go through the types of theological developments that the West did. That’s an absolute fact. The idea of atonement, of Christ as “satisfaction” that God requires, that He demands payment for sin, and so He demanded the death of His Son is basically very foreign to Orthodoxy. We don’t have that conception. That doesn’t mean we don’t believe that Christ’s death was atonement. Can you see the difference? These things are very subtle and very, very deep, and it takes a while to understand it. One way that we begin to have these understandings, besides reading, is to listen to the hymns and the prayers of the Church, to follow along, and try to form your Orthodox understanding of these concepts. I’m speaking in particular to those of you who are catechumens, to those of you who are converts, who hear the words and possibly assume a Western connotation of sin, suffering, and atonement. There is a Western view, and then there is an Eastern view of those concepts. And you need to try to understand more fully from the Eastern perspective what these things mean. However, this is something that takes time; but it does come if you are aware that there is a difference. I’m just trying to expose you to that concept. There are many excellent books that explain these things much better than I could ever explain them, and much more fully than I can in this brief period of time in the podcast.

But there are a lot of things that you could understand simply by paying attention to church services. A couple of weeks ago I received a call from a former parishioner who was once a Protestant and now is an Orthodox Christian. She said she wanted to ask me about Trinitarian theology, and you know this is not easy—to explain the Holy Trinity—but I did my best. I was trying to explain it to her in a very straightforward, basic manner, and she said “Oh! You mean, “Father, Son and Holy Spirit, Trinity, one in essence and undivided?” So there you go! She quoted the hymn from the Divine Liturgy that we say at absolutely every Liturgy. So you see there’s a reason why we have these hymns in the Church. They’re not sentimental, they’re not emotional, they’re not fluff, they’re not intended to be pretty. They express the theology of the Church, by singing them week after week, Liturgy after Liturgy. You see, this is why we don’t change the Liturgy constantly. Why don’t we do that? You can’t improve on the hymns. These hymns express the theology of the Church; and when we sing them, when we pray the prayers, these concepts become rooted in us, and they have tremendous expression of the faith—just as icons are not intended to be decoration but express the theology of the faith.

Presbytera and Dr. Jeannie Constantinou’s podcasts can be found here.

1 Dr. Jeannie is referring to the modern Greek practice, according to which the Orthos, or Matins is served just before Divine Liturgy. In the Slavic practice, festal Matins are served the evening before as part of the Vigil, which includes Vespers.

2 The Doxology is also called “Lauds”. Christ is Risen! Part 7b. The First Fruits of the Resurrection
Dr. Jeannie Constantinou

Christ is Risen! Part 7b. The First Fruits of the Resurrection
Dr. Jeannie Constantinou
We’re going to talk about what he meant by “first fruits”, and also what he meant by the statement “those who are baptized for the dead”—a very enigmatic statement. Christ is Risen! Part 6b. The Resurrection of the Body
Dr. Jeannie Constantinou Christ is Risen! Part 5b. The Apostle Paul

Christ is Risen! Part 5b. The Apostle Paul
Dr. Jeannie Constantinou
Let’s see what Paul said; he received this and passed on to them. The way he phrases it sounds very much like an early Creed. And I think we can say almost without qualification that this was an early Christian Creed. Christ is Risen! Part 4
Dr. Jeannie Constantinou
Today Dr. Jeannie talks about the nature of the resurrected body, the supposed “family tomb of Jesus” excavated in 1980, and the question, “Why did Jesus have to die?” Editor5/23/2017 12:27 pm
Seraphim: You can contact the author directly. Her contact information is on her podcast page:http://www.ancientfaith.com/podcasts/searchthescriptures

Seraphim5/23/2017 12:07 pm
When speaking on differences of East and West..you showed a Western point if view yet did not clarify The Eastern view at all.There wasnt a comparison at all.
You point out that there are differences.You should express them here, please.
I am a convert of nearly 20 years now. Baptised ,Charismated Holy Resurrection Church Kodiak, Alaska (OCA Russian).attending now Greek OC Saint Sophias Los Angeles, California.
I was raised Protestant, Exposed to Roman Catholicism in practice and literature, writings.
I deeply adore Our Faith and adhere to Orthodoxy to my best knowldge.
I am finding the more time passes the more i habe to learn.
Explain, please, Mercy and Attonment In Orthodox Tradition
×