He Leads Men Into a Spiritual Communion With Himself

A Word on the Feast of the Ascension 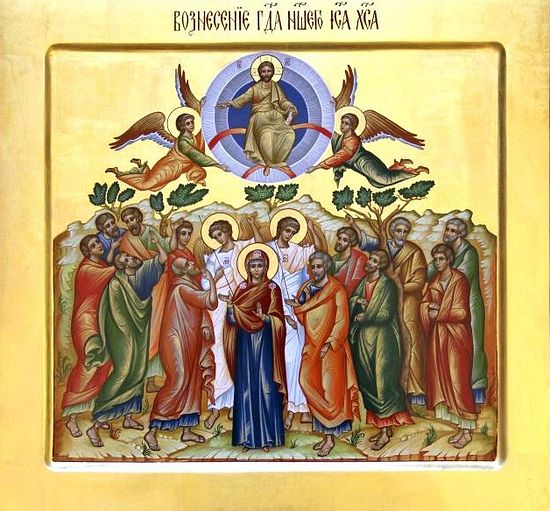 Sin, committed by man, introduced the corruption of death, making man’s eternal blessedness on earth an impossibility. The body, receiving within itself the seed of corruption, disintegrates and dies, because neither doth corruption inherit incorruption (1 Cor. 15:50). Sin itself, having been the sting of death, its source, could not be destroyed without the destruction of the mortal body, because the soul of fallen man was as if wholly dissolved into the flesh, and the flesh became the seat of sin. And through man’s sin, the earth became the dwelling place of corruption, the heart of man cleaving to it by the passions incited by it, but therefore the earth also and the works that are therein will burn up, the elements will melt and deteriorate, that the new Heaven and new Earth might appear (2 Pt. 3:10)—the dwelling of the righteous.

First, we must break away from the earthly predilections of the spirit of man, because in them is the beginning of sin. The heart must ascend to God. When sin will be destroyed, then the body can become incorrupt and spiritual, capable of abiding in Heaven.

Christ prepared a place for man in Heaven by His Ascension. He said that His Father has many mansions and it’s better for Him to go and prepare there a place for those who believe in and love Him, that they would be there where He is (Jn. 14:2-3; 16:7). The Lord endured death, arose, and ascended into Heaven for man’s renunciation of earthly passions and his entrance into the Heavenly abode. By His Ascension the work of man’s salvation is continued by the Holy Spirit, sent by Him into the world, cleansing man from sin and granting him spiritual life. Abiding first with man in the flesh to bring them into communion with God, visibly at first, in His Resurrection Christ appears to the disciples only temporarily in the body, already spiritualized, as if arranging the transition from visible communion to spiritual. By His Ascension He leads men into a spiritual communion with Himself in the Holy Spirit. This is the secret of the holy apostles’ joy after the Lord’s Ascension, and the reason why their mourning at separating from the Lord turned into the great joy of eternal spiritual communion with Him in the Holy Spirit. This joy enters the heart of those who love Christ through faith, as it did into the hearts of the apostles.

Let us glorify Christ, Who promised by His Ascension to be with us until the end of the age, continuing to see and hear us, and manifesting Himself in various ways; leaving palpable, tangible traces of His invisible indwelling in our lives, making all things in it new (Rev. 21:5).

Ascension
Jesus did not live with his disciples after his resurrection as he had before his death. Filled with the glory of his divinity, he appeared at different times and places to his people, assuring them that it was he, truly alive in his risen and glorified body.
Comments
×