The Lord, God, and Savior

On the seventh Sunday after Pascha, the Church celebrates the memory of the fathers of the First Ecumenical Council. What did this Council accomplish? It defended the Church’s faith that in our Lord Jesus Christ we meet not simply Someone great or even supernatural—we meet God. Jesus is perfect God and perfect man; His word and actions are the words and actions of God. His promises and forewarnings are the promises and forewarnings of God. 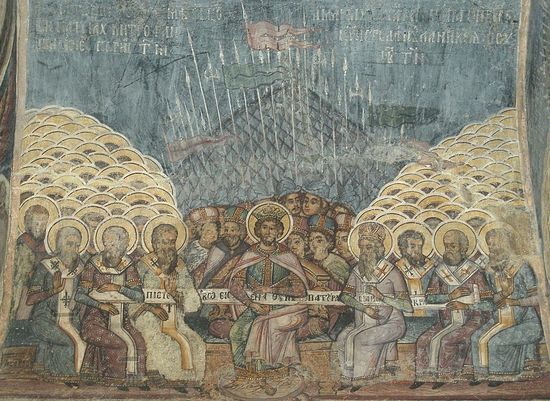 The Christian’s faith separates him from all others; many religious systems would gladly include Jesus in their picture of the world—as a Prophet, an Enlightened One, an advanced Guru, as One of the Great Moral Teachers. But Christianity is the belief in Jesus Christ as God.

Arius was attacking this faith. Arius taught that the Son of God is the greatest of created beings, but not God in the true sense. Of course Arius acknowledged that the Son was many times called God in the Bible (for example in Hebrew 1:8-12), but he proposed that this be interpreted as an indication of the Son’s “similar nature to the Father, seeing the Son as the highest of all creation—but a creation after all. In our times this teaching is to some extent taught by the Jehovah’s Witnesses.

Arius’s views seemed simpler and easier to understand; they were liked by people for whom the mystery of the Trinity seemed not only unfathomable but also irritating.

The fathers of the Council rejected this heresy and steadfastly determined that the Son of God is one in essence with the Father, which means He possesses the same divine nature as the Father. What does this mean, and why is it so important?

The apostolic proclamation that “God is Love” (1 Jn. 4:8) is widely known and readily repeated, even by non-Christians. But what is this proclamation based upon? Upon Christ’s sacrifice: In this we have known the charity of God, because he hath laid down his life for us: And we ought to lay down our lives for the brethren (1 Jn. 3:16), But God commendeth his charity towards us; because when as yet we were sinners, according to the time, Christ died for us (Rom. 5:8-9).

But in what way does the torturous death of a good man, a righteous man, entirely dedicated to God, prove God’s love? It could more likely have caused serious doubts. How can the sacrifice of this Man be the sacrifice of God? If creation became man and died for us, even if it were the highest creation, then what does God have to do with it? He can create as many such creations as He wants. The proclamation that “God is love” makes sense only if the One Who died for us on the Cross is both perfect man and perfect God. The holy apostle Paul commands the presbyters of the Church to, to rule the church of God, which he hath purchased with his own blood (Acts 20:28). It only makes sense to speak of “God’s blood” if Jesus Christ, as the Scripture confirms over and over again, is God.

In the Bible this proclamation of Christ’s divinity is very insistent; moreover it is providentially given in this way in order to exclude the Arian reinterpretation in the sense of a “created god.” During the Savior’s time, pious people avoided talking about God directly, afraid to violate the commandment to “take not the Lord’s name in vain.” When speaking of God, they more often indicated obliquely: “the Blessed One,” “Lord,” “Heaven,” “Great King,” or “Judge.”

And here Jesus indicates Himself as the King, the Judge, the One Who sends the Prophets, the One about Whom the Old Testament prophecies speak of as God, and so on. In the context of the Scripture this cannot mean anything other than an utterly clear proclamation of His divinity. Let us recall at the very least the parable of the Last Judgment:

And when the Son of man shall come in his majesty, and all the angels with him, then shall he sit upon the seat of his majesty. And all nations shall be gathered together before him, and he shall separate them one from another, as the shepherd separateth the sheep from the goats: And he shall set the sheep on his right hand, but the goats on his left (Matt. 25:31-33).

Jesus is in the role here of the Judge of all nations, although in the Biblical context there is no higher Judge besides God, nor can there be. Those around Him understood this perfectly:

The Jews answered him: For a good work we stone thee not, but for blasphemy; and because that thou, being a man, maketh thyself God (Jn. 10:33).

The Church’s proclamation, “not as intercessor, nor as an angel, but the Lord Himself became incarnate and saved me the whole man,” is deeply rooted in Scripture; more than that—it comprises it’s, the Scripture’s, main content.

For the external man this dogmatic question—as Whom should we honor the Lord Jesus—sometimes seems simply unimportant. And there is a reason for this: Such a man lives without hope. If we will die forever anyway, then it is not so important which stories we use to console ourselves in the face of inescapable disappearance into oblivion.

But when we obtain hope of life eternal, in Whom we place our hope and to Whom we cry out in prayer becomes very important for us.

After all, in prayer we seek with faith to submit to Jesus Christ as Lord, we ask for His mercy as from the Judge, we hope in Him as the Savior, and in the Biblical context there is no other Lord, Judge, and Savior other than God. As God says through Prophet Isaiah, I am, I am the Lord: and there is no saviour besides me (Is. 34:11).

Such prayer and faith are only possible if Christ is the true God.

And the fathers of the First Ecumenical Council, whose memory we gratefully and reverently commemorate today, defended this saving faith for us. An Exclusive Creed
Fr. Lawrence Farley
Why this insistence on exclusion? The Fathers of Nicea wanted to exclude heresy from the Church for the same reason that a doctor wants to exclude cancer from the body of his patient—because if he includes the cancer in the patient’s body, the result will be the death of the patient. Cancer kills, and so does heresy. Heresy is not simply incorrect opinion, akin to getting a numerical sum wrong. Heresy is stubbornly refusing to accept the truth, in exactly the same way as someone who has been poisoned might stubbornly refuse to accept swallowing the antidote. A person who has been poisoned will die. And the good intentions of the heretic notwithstanding (for who knowingly accepts error?), the person who refuses God’s provided remedy of Christ will also die. The “Model of Meekness”, and Slapping Arius
Orthodox Pastors on Zeal for God
Anna Erakhtina
When contemplating how they should oppose enemies of the Church, Orthodox Christians often recall St. Nicholas, who slapped Arius in the face. Several Russian Orthodox clergymen talk with us about the saint’s “intolerant” deed.
Comments
×