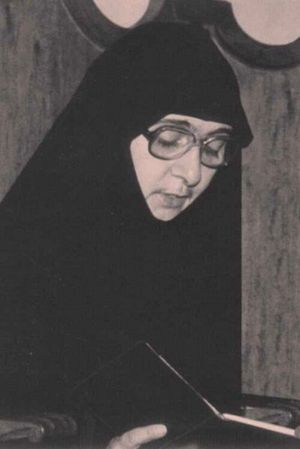 The life of the beloved Eldress Theosemni is a Synaxarion account of perfection in self-emptying and martyric asceticism in silence and humility. Her personage and her venerable example cannot be appreciated through the description and listing of her virtues, for it is impossible to explain, through words, the balance and grace of a person who spoke through her silence.

The Eldress Theosemni, Anastasia-Aristea Dimtsa in the world, was born in Larissa in the year 1938, the third child of pious parents. When she was just four years old, she lost her father and the care of the family fell to its newly widowed mother, who was from Eastern Romylia and was wholly dedicated to God.

From the time she was a child, she received profound love from Christ and the Church, and she would hasten to attend the services and all-night vigils with a zeal that was unusual for her age. She also participated with great zeal in the youth activities at church and, from a very early age, expressed her desire to serve as a missionary.

She studied at the Red Cross’s School for Nursing, from which she graduated with highest honors. She chose this path out of zeal to serve humans in pain.

In 1966 she became a nun at Meteora. It is widely agreed that her monastic path was a model of obedience and asceticism. Unforeseen difficulties arose at that time, at the beginning of her monastic path, with which she dealt prudently, quietly, and humbly.

In 1976, Eldress Theosemni went to Hania (Crete) with two other nuns and, with the blessing of his eminence Metropolitan Irenaeus of Kydonia and Apokoronos, she took on the reconstruction, from its foundation, of the ruined Chrysopigi Monastery. Over the course of twenty-four years she worked in silence, with perfect self-renunciation. Her spiritual presence and her ascetic example encouraged many souls to dedicate their lives to the Bridegroom Christ, and she led them and established them in the Lord.

The abbess was an ascetic, a lover of struggle, and prudent. She restored the Holy Monastery of Chrysopigi from ruins, along with its miraculous icon of the Life-Giving Spring, and gave the monastery a spiritual foundation. She also restored the neighboring monastic dependency, the Monastery of St. Kyriaki. In her final years, she sought a more deserted place for the sisterhood. She established the Monastery of the Transfiguration on a rock, under the fatherly care of the venerable Elder Porphyrios.

At the age of forty-eight she became seriously ill with cancer and was miraculously cured by Elder Porphyrios, who had an especial love and respect for her. Ten years later, her sickness returned to her, during the four final years of her life. She accepted her sickness with great courage and perseverance, immense patience, gentleness, and deep peace, unceasingly fulfilling her duties until her final breath.

...Read the rest at Pemptousia. “The Spirit of Russia is Christ”
Hieromonk Vasily (Roslyakov) Behind the Monastery Walls
Romania’s monasteries are known worldwide for their magnificent beauty, but what do we know about the people that live there?
Comments
×