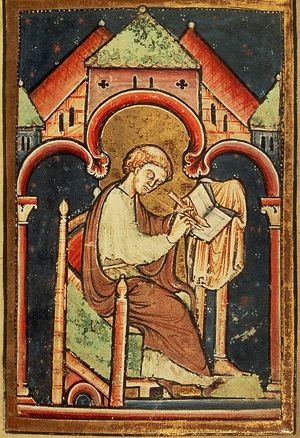 Photo: thomryng.com
Saint Bede was a church historian who recorded the history of Christianity in England up to his own time. He was probably born around 673 in Northumbria. We do not know exactly where he was born, but it is likely that it was somewhere near Jarrow.

When he was seven, Bede was sent to Saint Benedict Biscop (January 12) at the monastery of Saint Peter at Wearmouth to be educated and raised. Then he was sent to the new monastery of Saint Paul founded at Jarrow in 682, where he remained until his death. There he was guided by the abbot Saint Ceolfrith (September 25), who succeeded Saint Benedict in 690, ruling both Wearmouth and Jarrow.

There is an incident in the anonymous Life of Ceolfrith which may refer to the young Bede. A plague swept through Ceolfrith’s monastery in 686, taking most of the monks who sang in the choir for the church services. Only the abbot and a young boy raised and educated by him remained. This young boy “is now a priest of the same monastery and commends the abbot’s admirable deeds both verbally and in writing to all who desire to learn them.”

Grieved by this catastrophe, Ceolfrith decided that they should sing the Psalms without antiphons, except at Matins and Vespers. After a week of this, he went back to chanting the antiphons in their proper place. With the help of the boy and the surviving monks, the services were performed with difficulty until other monks could be brought in and trained to sing.

Saint Bede was ordained as a deacon when he was nineteen, and to the holy priesthood at the age of thirty by Saint John of Beverley (May 7), the holy Bishop of Hexham (687), and later (705) of York. Bede had a great love for the church services, and believed that since the angels were present with the monks during the services, that he should also be there. “What if they do not find me among the brethren when they assemble? Will they not say, ‘Where is Bede?’

Bede began as a pupil of Saint Benedict Biscop, who had been a monk of the famous monastery at Lerins, and had founded monasteries himself. Saint Benedict had brought many books with him to England from Lerins and from other European monasteries. This library enabled Bede to write his own books, which include biblical commentary, ecclesiastical history, and hagiography.

Bede was not an objective historian. He is squarely on the Roman side in the debate with Celtic Christianity, for example. He was, however, fair and thorough. His books, derived from “ancient documents, from the traditions of our ancestors, and from my own personal knowledge” (Book V, 24) give us great insight into the religious and secular life of early Britain. To read Saint Bede is to enter a world shaped by spiritual traditions very similar to those cherished by Orthodox Christians. These saints engage in the same heroic asceticism shown by saints in the East, and their holiness fills us with love and admiration. Christians were expected to fast on Wednesdays and Fridays, and there was a forty day Nativity Fast (Book IV, 30).

Saint Bede became ill in 735. For about two weeks before Pascha, he was weak and had trouble breathing, but experienced little pain. He remained cheerful and gave daily lessons to his students, then spent the rest of the day singing Psalms and giving thanks to God. He would often quote the words of Saint Ambrose, “I have not lived in such a way that I am ashamed to live among you, and I do not fear to die, for God is gracious” (Paulinus, Life of Saint Ambrose, Ch. 45).

In addition to giving daily lessons and chanting the Psalms, Saint Bede was also working on an Anglo-Saxon translation of the Gospel of Saint John, and also a book of extracts from the writings of Saint Isidore of Seville (April 4). On the Tuesday before the Feast of the Lord’s Ascension, the saint’s breathing became more labored, and his feet began to swell. “Learn quickly,” he told those who were taking dictation from him, “for I do not know how long I can continue. The Lord may call me in a short while.”

After a sleepless night, Saint Bede continued his dictation on Wednesday morning. At the Third Hour, there was a procession with the relics of the saints in the monastery, and the brethren went to attend this service, leaving a monk named Wilbert with Bede. The monk reminded him that there remained one more chapter to be written in the book which he was dictating. Wilbert was reluctant to disturb the dying Bede, however. Saint Bede said, “It is no trouble. Take your pen and write quickly.”

At the Ninth Hour, Bede paused and told Wilbert that he had some items in his chest, such as pepper, incense, and linen. He asked the monk to bring the priests of the monastery so that he could distribute these items to them. When they arrived, he spoke to each of them in turn, requesting them to pray for him and to remember him in the services. Then he said, “The time of my departure is at hand, and my soul longs to see Christ my King in His beauty.”

That evening, Wilbert said to him, “Dear Master, there is one sentence left unfinished.”

Then the young monk said, “It is finished now.”

Saint Bede replied, “You have spoken truly, it is well finished.” Then he asked Wilbert to raise his head so that he could see the church where he used to pray. After chanting, “Glory to the Father, and to the Son, and to the Holy Spirit” to its ending, Saint Bede fell asleep in the Lord Whom he had loved.

Although Saint Bede reposed on May 25, the eve of the Ascension, he is commemorated on the 27th, since the Feast of Saint Augustine of Canterbury is appointed for the 26th. His body was first buried in the south porch of the monastery church, then later transferred to a place near the altar. Today his holy relics lie in Durham Cathedral, in the Galilee chapel. Saint Bede is the only Englishman mentioned by Dante in the DIVINE COMEDY (Paradiso). Lost skull of Venerable Bede discovered in Cambridge University storage cupboard
Professors made the discovery of what is thought to be the top of the head of Venerable Bede, one of the North East's greatest sons.