Pilgrims Begin the Velikoretsky Procession of the Cross 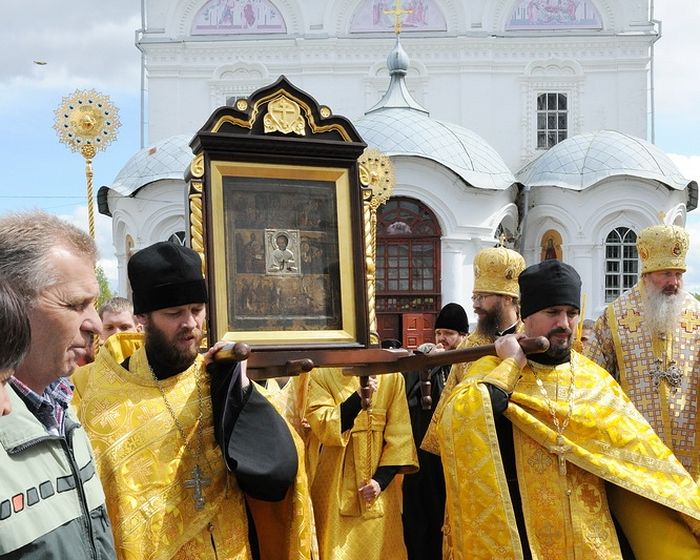 The cross procession was preceded by the Divine Liturgy at the Dormition Cathedral in the city of Kirov which was headed by Metropolitan Mark of the Vyatka and Slobodskoy. Bishop Leonid of Urzhum and Omutninsk, Bishop Paisy of Yaransk and Luza, clergy of the Vyatka Metropolia and neighboring dioceses concelebrated with His Eminence, reports Patriarchia.ru.

After the Liturgy a prayer service with akathist were performed before the “Velikoretsky” icon of St. Nicholas in the square near the Dormition Cathedral.

On June 6, the anniversary of the miraculous appearance of the “Velikoretsky” icon of St. Nicholas the Wonderworker, Bishop of Myra in Licia, the primate of the Russian Orthodox Church is to celebrate the Divine Liturgy and a prayer service with the blessing of waters.

The Velikoretsky Procession of the Cross is one of the longest and most ancient processions in Russia.

The icon of St. Nicholas the Wonderworker was discovered in 1383. A peasant named Semyon Agalakov from the Krutitsy village discovered the icon on the bank of the Velikaya River, hence its name, Velikoretsky [“of the Velikaya, or “Great” River].

In about 1400 the icon was sent to the town of Khlynov which was later renamed Vyatka (and in 1934 renamed Kirov). Khlynov residents vowed to bring the icon to the site of its appearance every year. Until 1777 the procession of the cross was arranged by water—on boats and rafts along the Vyatka and Velikaya Rivers, and then it was held by land.

In the sixteenth century by order of Tsar Ivan IV the icon was brought from Khlynov to Moscow. Sick people were healed and other miracles occurred en route. At the tsar’s command, one of side-chapels of the Cathedral of St. Basil the Blessed, which then was under construction, was dedicated in honor of the “Velikoretsky” icon of St. Nicholas. From that time on the veneration of the miraculous icon began to spread all over Russia. The icon was brought to Moscow for the second time by order of Tsar Mikhail Fyodorovich in the seventeenth century. The feast in commemoration of the icon (June 6 according to the new calendar) was established in 1668.

In 1935, when the cathedral in Kirov was destroyed, the miraculous icon was lost. The Velikoretsky Cross Procession was officially prohibited in the 1930s and was not resumed until 1989. Today in the cross procession pilgrims carry one of the copies of this icon instead of the original.

In 2000 His Holiness Patriarch Alexis II assigned the Velikoretsky Procession the all-Russian status.

The cross procession is held annually from June 3 to 8. The major festive events are organized on June 5 and 6 on the Velikaya River and at the Holy Transfiguration-St. Nicholas Monastery in the Velikoretskoye village.

The procession starts on June 3 from the Dormition Cathedral of the city of Kirov and travels through the villages of Makarye, Bobino, Zagarye, Monastyrskoye, and Gorokhovo. The point of destination is the village of Velikoretskoye, where prayer services are performed at churches and on the bank of the River Velikaya. Pilgrims walk back via the Medyany and Murygino villages and reach Kirov on June 8. Thousands of pilgrims from different cities, towns and villages of Russia walk 180 kilometers (c. 111.8 miles) in total. Over 50,000 worshippers gather for services at the Velikoretskoye village.

The “Velikoretsky City” architectural and church complex, which was created in the eighteenth to nineteenth centuries in the Velikoretskoye village, is being restored there. It comprises the Holy Transfiguration Church (1739), St. Nicholas Church (1822-1839), St. Elias bell-tower (1860) along with a mall, shopping arcades and four two-storied stone houses for clergy and staff, and a school (the nineteenth century). The All-Ukrainian Cross Procession: 100 photographs
According to the most modest accounts, over 80,000 people participated in the procession that stretched across the Ukraine in two flanks—from East and West. “Royal Days:” Cross procession on the night of July 16-17

Cross procession in honor of the 700th anniversary of St. Sergius of Radonezh
Photogallery
On July 16, 2014, a Cross procession took place in Russia from the Stravropegic Convent of the Protection of the Mother of God in Khotkovo, where St. Sergius was born, to the Annunciation field near Sergeyev Posad, the home of the Holy Trinity-St. Sergius Lavra.
Comments

Arvind Anmol Tirkey6/15/2018 4:32 pm
Hi Sir,
God bless you,
I am 28 year old christian boy from India, I just saw this Procession, felt very happy and excited. I wanted to be the part of this religious journey next year 2019. So, just wanted to know whether I can participate or not as a foreigner, what are the documents do in need and other stuffs.
Thank You
Have a nice day.
×