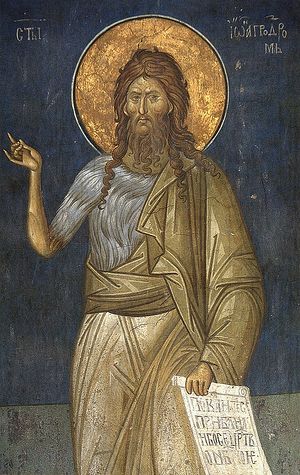 St. John the Baptist:
Behold I will send you Elias the prophet, before the coming of the great and dreadful day of the Lord. And he shall turn the heart of the fathers to the children, and the heart of the children to their fathers: lest I come, and strike the earth with a curse (Mal. 4:5-6)—thus did the prophet Malachai prophecy concerning St. John the Baptist, 400 years before the coming of the Savior into the world. The Lord Himself confirmed the fulfillment of this prophecy when at the disciples’ question about John He said, Verily I say unto you, Among them that are born of women there hath not risen a greater than John the Baptist: notwithstanding he that is least in the kingdom of heaven is greater than he. And if ye will receive it, this is Elias, which was for to come (Matt. 11:11,14).

As we see, the Gospel image of the holy Forerunner is filled with the spirit and power of the prophet Elias; that is, he is linked to the righteous Old Testament prophet by his courage and zeal, shown in the time that the Savior came to the world.

However, New Testament courage has another form, different from that of the time when the prophets warred with the impiety of Old Testament Israel. Christ clearly points to this by forbidding the apostles James and John when they wanted to bring down fire from heaven, like Elias, upon the Samaritans who rejected the Lord. The Savior says to His disciples, Ye know not what manner of spirit ye are of. For the Son of man is not come to destroy men's lives, but to save them (Lk. 9:55–56). The Forerunner himself also testifies to this new idea of courage. He says to his own disciples when they were zealous over their teacher’s glory, diminished as it was by Jesus Christ’s preaching, He must increase, but I must decrease (Jn. 3:30). Likewise in another passage we read that John the Baptist, the “great and dreadful” prophet (Mal. 4:5), who had no equal among those born of women (cf. Matt. 11:11), when he heard in the prison the works of Christ, he sent two of his disciples, and said unto him, Art thou he that should come, or do we look for another? (Matt. 11:2–3). Could it really be that such a great prophet did not recognize the Savior even after His Baptism? We can’t accept that! All the exegetes also talk about this. St. John the Baptist of course knew about Christ; he did not need any additional testimony. Nevertheless, for his disciple’s sake, so that they would once more be convinced that this is the true Messiah, he diminishes himself, becomes a blind man before the Truth that is obvious to him, denies himself and sends his followers to behold the works of Christ! Herein is manifested the New Testament courage and zeal—in his decisive renunciation of himself before the Truth!

Truly, a person can become great only if he has courage. However, for the strong of this world it is a destructive courage to live without the Truth, but for the inheritors of the Kingdom of Heaven, it is the courage to live always in Truth’s presence. St. John the Forerunner shows us an image of good courage also at the event of the Lord’s Baptism. After all, if we look carefully at the words of the Gospel we will see that during the Savior’s Baptism, His Forerunner once again transcends himself, overcoming even his own view of righteousness for the sake of the Truth! The Evangelist Matthew witnesses to us that when Jesus Christ came to John at the Jordan, John forbad him, saying, I have need to be baptized of thee, and comest thou to me? (Matt. 3:14). We can only imagine the reverent awe and feeling of humility that filled the prophet at the sight of the Lord. And here the Creator approaches His creation like an ordinary Man seeking Baptism. Naturally, the holy Forerunner could not allow the thought of placing his hand on the Creator! But Jesus answering said unto him, Suffer it to be so now: for thus it becometh us to fulfil all righteousness. Then he suffered him (Matt. 3:15).

We see in the image of St. John the Baptist a remarkable example of Christian courage. It is the courage to live in the presence of Truth, to witness to Him by his life, but to always remember that not our life has meaning, not our words or deeds, but the ability to be unnoticeable, to sacrifice even our own authority and reputation before Him. Applying this truth to the teaching profession, Archpriest Vasily Zenkovsky said, “There is nothing less thankless and at the same time more inwardly honorable than the role of a teacher. ‘It is my time to wither, and yours to blossom.’ This is could serve as the ideal motto in our relationship to children. This is what the teacher is preparing the child for—to come out from under his tutelage.”

Sometimes the most difficult thing for a person is to sacrifice his own ideas of what is correct and necessary. However, the Holy Scripture and many centuries of the Church’s experience show that the one who seeks salvation must be ready to do just that. Before the Truth, none of our experience or worldview tenets, no matter how sure they may seem to us, have any meaning. And St. John the Baptist is an important example for us of this. He was one of the first to testify by his own life to the immutability of God-revealed truth: Blessed are the poor in spirit: for theirs is the kingdom of heaven (Matt. 5:3). The Untold Story of the Head of St. John the Baptist
Priest Maxim Massalitin
Unfortunately, few of the faithful have recourse to the help of such a lamp of grace as the precious head of St. John the Baptist, “the first among martyrs in grace”.[2] Many Orthodox Christians come to France, but not all of them know how many holy relics there are still on French soil despite the outrages committed against them during the French Revolution and subsequent forgetfulness of France’s Christian past.
Comments
×