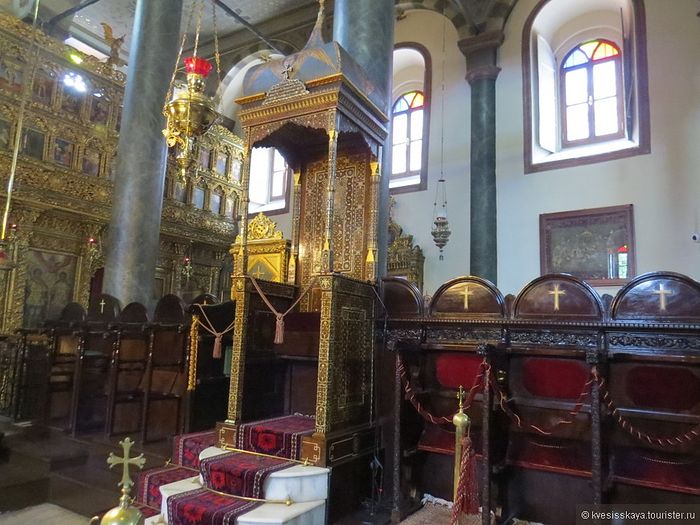 Dennis Menos, the author of the publication “Enhancing the Role of the Ecumenical Patriarch” on The National Herald, asserts that the organizational structure of the Orthodox Church based on the principle of autocephaly does not meet the requirements of the present day. In particular, according to Mr. Menos, it does not allow to solve the diaspora problem and impedes interfaith dialogue. He believes that “the Ecumenical Patriarch needs to be elevated to the rank of “head” of the Orthodox East, with authority to act and speak for the entire Church” and that His Holiness “will need to be freed of all responsibility for serving also as the Primate of the Church of Constantinople”. The author argues that the Ecumenical Patriarch would then be able to represent the fullness of the Orthodox Church in dialogues with heterodox Christians and “to focus on activities designed to reunify Greek Orthodoxy”. According to Mr. Menos, one such activity would be the convening annually of a conclave of the Primates of all 14 Autocephalous Churches as “the highest leading assembly of the Orthodox East.”

Comments to the article are quite interesting too. They express moderate support of the author or emphasize the perniciousness of the “religious dictatorship”, exemplified by the OCA and the GOARCH, suggesting that the Church’s influence should be enhanced through reforms aimed at activating missionary activity and democratization of church life.

In my opinion, all these things characterize the current situation in American Orthodoxy quite precisely. That’s why I’d like to share some observations in this regard. Moreover, Dennis Menos isn’t alone. As comments to the article show, he is backed even by some GOARCH clergymen. At least for only this reason, his voice is worth being heard and examined carefully.

Who is speaking on Orthodox Christian affairs?

In his Twitter posts, Mr. Menos has repeatedly called for an early reconciliation of the Eastern Orthodox Church and the Roman-Catholics and expressed support of the actions of Patriarch Bartholomew in this perspective. The publications of Dennis Menos repeatedly emphasize that the administrative unity of the Orthodox Church (which is often claimed by Patriarch Bartholomew without taking any real actions to reconcile the Jerusalem and Antiochian patriarchates, for example) is a necessary condition for overcoming the “senseless thousand-year division” between The Orthodox Church and the Roman Catholic Church.

In addition, he stands for the conversion of the St. Sophia Cathedral in Istanbul to an interfaith sanctuary, where people of all faiths could pray. Thus, he strives for “wrong ecumenism” rather than for healing the great Schism of 1054 through repentance and triumph of Orthodox teaching.

Is the writer an expert on the topic?

Dennis Menos is clearly unfamiliar with Orthodox ecclesiology since his saying about the unanimous decision-making “by all 14 Primates” in the absence of a “head” of the Church downplays the role of bishops in the Synods of Local Churches. His proposal to establish the annual Conclave of the Primates as the highest governing body is another example that reveals his non-Orthodox way of thinking. This idea is borrowed from Roman Catholics (although the author uses the Latin word conclave here inappropriately). In the Orthodox Church, the voice of the Primate does not mean anything without the support of his Synod, as the 34th Apostolic Rule says. And Mr. Menos proposes that the meeting of the 14 “big bosses” should solve all the problems of the World Orthodoxy in an authoritarian way, without asking their bishops. There was no such body in the Church for nearly 2000 years before Patriarch Bartholomew; this is an innovation alien to the Holy Canons and it’s not envisaged by them.

As to the idea of having a “head” of the Orthodox East, those who really want to have a “visible head” of the Church should know very well whom to resort to. If you want to have a pope—employ the services of a professional but not of an amateur. And we will stand on what the Holy Fathers taught: the Head of the Church is Christ! The visible head of the Church, “the vice-Christ” is another Latin heretical concept in Menos’ piece. Why on Earth does the Orthodox Church, after having lived 20 centuries without this false teaching, suddenly have to do a 180 degree turnaround in the 21st century and accept a doctrine completely alien to it?!

It would be better if the author studied the topic and current state of things more thoroughly before writing on it and coming up with suggestions on how to “fix” things.

Who backs him from within the Orthodox Church?

Unfortunately, the ideas of Dennis Menos were supported by the GOARCH clergymen who disrespect church canons and traditions. For example, Metropolitan Elpidophoros Lambriniadis is well known by his “first without equals” concept too. Fr. Basil Papanikolaou, a former GOARCH archpriest defrocked for his second marriage, and Fr. Steven Vlahos (retired) are far less famous, but cherish the same dream about having “the Patriarch Pope of the East”. Finally, Patriarch Bartholomew fulfills their aspirations through meetings and joint prayers with the popes, the Cretan “Holy and Great” Council, a letter to the Archbishop of Athens Ieronymos II, etc.

“By proclaiming the patriarch pope of the east, the Orthodox Church would be in position to fulfill the plans of this writer. Of course, tradition and canon law would have to be modified and the other Orthodox churches would have to agree. Perhaps this could be accomplished at a future Great and Holy Council,” Fr. Steven Vlahos stated in his comment to the article. Thus, it is ecumenical aspirations and the ultimate rapprochement with papism that determine the value of the “visible unity” of the Church for the Phanariots.

What fruits will these ideas will bear?

Quite surprisingly, the blatantly papist nature of the article “Enhancing the Role of the Ecumenical Patriarch” may facilitate the acceptance of Protestant ideas (such as those expressed in Ashley Navis’ comments to this publication) about reforming the Church to truckle to the laity. Both extremities increase the tolerance of the readers—mostly Americans of Greek origin—toward deviations from the Orthodox Christian teaching.

The Archons of the Ecumenical Patriarchate, members of the Order of St. Andrew, the Apostle mentioned by Dennis Menos, are actively involved in political activities, some of them strongly oppose Donald Trump and do not stop before using their influence in the Church to promote their political views. Many influential laypeople who belong to the GOARCH adhere to liberal views on marriage and “gender equality” and stick to non-Orthodox spiritual practices. 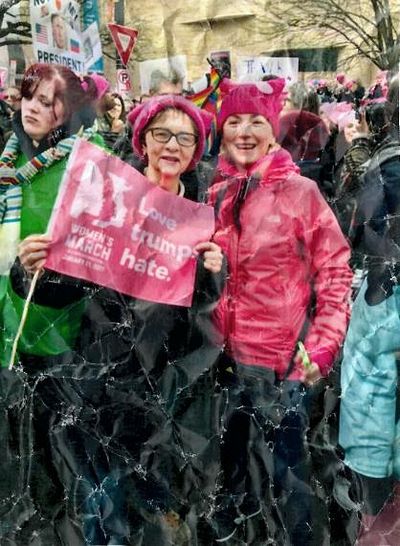 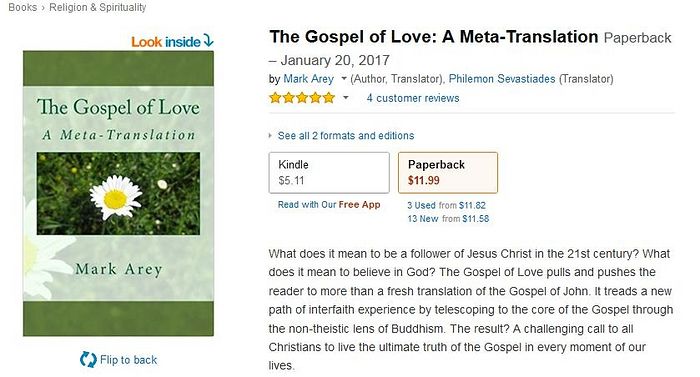 ​A book by Mark Arey, former GOARCH priest who left the priesthood in order to remarry but still is actively engaged in Patriarch Bartholomew’s projects


Whom and what will the Ecumenical Patriarch serve if such people impose their ideas on the Orthodox clergy “in love and humility” in the guise of fighting for “transparency and accountability”? As if it were politicians and millenials, disoriented by the collapse of the institution of the family, who created the Church and have a right to rule over it!

What is a proper response?

Seems like Patriarch Bartholomew has become a toy, a subsidiary coin in the struggle between the two Christian denominations most widely covered by the media. On the part of His Holiness, the best protection of the interests of Orthodoxy in this situation would be distancing oneself from any influences from outside of the Church and not to take any side while focusing on spiritual life (one’s own and that of the flock) and standing firmly on the traditional, strictly Orthodox principles of church organization. Patriarch Bartholomew awarded for commitment to ecumenism
Meanwhile, in his letter the pope entrusts the patriarch, his “dear brother Bartholomew,” to the protection of St. Nicholas in common prayer for the sake of “the desired achievement of full unity amongst Christians.” Such ecumenical overtures also draw heavy criticism from many Orthodox hierarchs, monastics, and laity.
Comments

Caj Ilotuuli6/26/2017 9:34 am
No ! The Holy OrthodoxChurch will never surrender to dictators like Patriarch Bartholomew . He is not worthy the title he has . The Orthodox Church shall not change anything .

Anthony6/23/2017 8:27 pm
''Seems like Patriarch Bartholomew has become a toy, a subsidiary coin in the struggle between the two Christian denominations most widely covered by the media.''

Oh come off it. Bartholomew IS the problem. You cannot serve God and mammon. He is a grown man who knew exactly how difficult the role of the phanar would be. He has chosen to do nothing but insult and offend genuine right thinking Orthodox the world over through HIS actions. He bears full responsibility for the trouble he has caused with his ecumenist delusions. If barthomomew wants some uniate status for his jurisdiction, let him have it. I doubt any Greek Orthodox in the west would be any the wiser in any event. And leave the rest of us alone.
×