The Man From Antigua Who Founded the “African Orthodox Church”

Antigua and Barbuda is an island nation in the Caribbean Sea. Amongst its sons, George MacGuire, the founder of the “African Orthodox Church” occupies a worthy place. By the time he died the Church numbered about 30,000 faithful, fifty clergy, and dozens of parishes in the U.S.A, Uganda, Kenya, Canada, Venezuela, Cuba, and Antigua. Who was this man, and why did he turn his spiritual search toward Orthodoxy?

George MacGuire was born on March 28, 1866 on the island of Antigua in the settlement of Svits. There did he spend his childhood and youth. He finished the local school and college, and then the seminary of the Moravian Church. He was the pastor of that church for six years, from 1888 to 1894.

In 1894, George moved to the U.S., where he converted to Anglicanism, and then two years later became an Anglican priest. He was the rector of the church of St. Philip in Richmond (1898-1900), the church of St. Thomas in Philadelphia (1901-1905), and a missionary to Afro-Americans in Arkansas (1905-1909). Testimony to his talent as a preacher is the fact that after only four years in this position he increased the number of missions from one to nine.

In 1910, he received a medical education in Boston College. At that time he founded a community in Cambridge for black immigrants from the Caribbean Islands. However, the Episcopalian Church did not recognize this community, and MacGuire became more and more convinced that in a church where his own bishop upheld the principle of segregation, there were scant prospects for black people.

After receiving news of his mother’s illness, George left everything and returned to Antigua in 1913. There he took care of his mother for five years, served in the Anglican church, and gave medical aid to the needy.

After his mother’s death, MacGuire returned to the U.S. and there took an active part in the movement promoting citizenship and equal social rights to the black population. Being a believing Christian, he wished to provide this equality in church life. He would say to his followers, “We are obligated to return to our native Church.” And in search of this Church, George discovered the Orthodox Christian tradition. It so inspired him that in 1921 he, to the surprise of many, announced the creation of the “African Orthodox Church,” of which he became the head.

Why did George MacGuire consider it necessary to turn the gaze of black American Christians precisely to the Orthodox Church? He named two reasons. First, because it is the original, authentic Church of Christ, which has unbroken apostolic succession. Second, because Orthodoxy “was never associated with racism and colonialism.”

Truly, black Christians have been part of this Church since ancient times and have even become famous Orthodox saints. For example, St. Moses the Black, a monk of the fourth century who lived in the Egyptian desert, or blessed Elezvoi, king of Ethiopia.

It is considered that MacGuire was aided in his introduction to Orthodoxy by Jamaican-born Robert Morgan, who was together with him a priest of the Episcopalian church in the U.S. and his successor as rector of the Church of St. Philip in Richmond. Even at the beginning of the twentieth century, Morgan had begun to study the history of the Church, and as a result he was convinced that the Orthodox Church is the “pillar and ground of truth.” In 1904, he travelled to the Russian Empire in order to become acquainted with Orthodoxy not just from books, but in life. There he visited the monasteries and churches of Moscow, St. Petersburg, Kiev, and Odessa, and even became an honored guest of Russian Emperor Nicholas II. Soon Robert Morgan received Orthodoxy with the name Raphael, and in 1907 he was ordained by the metropolitan… as a priest of the Orthodox Church of Constantinople.

Such a striking contrast, when a young black Christian is received with great love at the highest level in an Orthodox country while in his own country he doesn’t even have the right to drink water from the same fountain as a white person, convinced MacGuire better than any declarations that the Orthodox Church is free from racism, and not only historically but also in modern times. 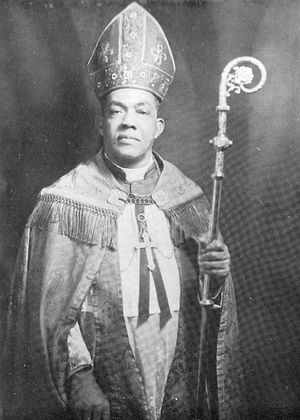 George Alexander MacGuire
But unlike Raphael Morgan, George MacGuire took a different path; he did not personally join the Orthodox Church, but decided to found his own large church, supposing that in the future he would come to an agreement with Orthodoxy to have it recognized. MacGuire’s initiative quickly found sympathizers, first of all among people from Antigua and other Caribbean Islands living in the U.S. who flocked to his church. Thanks to his preaching and organizational talents, the number of the faithful grew rapidly, and branches of the church began to appear outside the U.S., including in Africa.

From the very beginning, George MacGuire entered discussions with the Russian Orthodox Church about his ordination, but although he was accepted kindly, he was unable to receive what he asked for. The reason for this was that he basically wanted to receive ordination from a Church of which he had no intention of being a clergyman, but rather to head his own “independent church,” and this contradicts the Orthodox rules and teachings about the Church. Nevertheless, he was able to come to an agreement with Archbishop Vilett, the head of the self-proclaimed “American Catholic Church”. Vilett ordained George Macquire a bishop on September 28, 1921.

In that same year, MacGuire met personally with the Patriarch of Constantinople Meletios and discussed with him the possibility of recognizing the “African Orthodox Church.” He convinced the Patriarch that they believe in the Trinity and the two natures of the incarnate Christ, accept the seven Ecumenical Councils, preach the undamaged Creed (without the Catholic addition of the filioque), venerate the Mother of God, and believe in salvation not only by faith but also by works. According to George’s words, the Patriarch agreed that their teaching on these points is Orthodox, but the matter of accepting them into canonical communion was postponed until such time as the “African Orthodox Church” “demonstrates stability and growth.”

In 1924, the next Patriarch of Constantinople Gregory VII, within the framework of continuing dialogue, requested more information about MacGuire’s church. As it turned out, although it had in many regards accepted the Orthodox dogmatic teaching, in everything else, including divine services and parish life, the “African Orthodox Church” continued to hold to the Anglican order. During George MacGuire’s lifetime its full turn to the Orthodox ways did not happen, and therefore it did not become a part of the Universal Orthodox Church.

George died on November 10, 1934 and is buried in the Bronx. After his death, the branch of the “African Orthodox Church” in Uganda and Kenya, the parishioners of which comprised over a third of the faithful, entered into unity with the canonical Orthodox Church and became part of the ancient Patriarchate of Alexandria. Thus did they bring to its logical conclusion the movement that MacGuire had initiated. Thanks to his efforts, in the final analysis thousands of Africans found their way to Orthodoxy.

At the present time, in George’s native Antigua, a parish of the canonical Orthodox Church in the Antiochian jurisdiction has opened. This could be considered a beautiful symbolical completion of the path that this distinguished son of Antigua began 100 years ago. Trevor Kellman9/22/2018 10:23 am
Thanks for such informative reading and or info re:Orthodoxy among black people-thanks for recognizing his works.I am also interested in learning about the faith and the participation ofpeoples of colour in orthodoxy faith_I look forward to reading more of these articles.

Akunda12/7/2017 8:04 pm
This is very wonderful I guess you forgot South Africa where actually he went first and founded a big movement before actually moving to East Africa. The group he founded is still there to present and part of it joined Coptic and the other Ethiopian and the other Greek Orthodox Church. I worked with many of them there. Thank you so much.
Fr Dr. Stephen Hayes has written also a lot especially his pilgrimage in South Africa and africa
Bishop Athanasius akunda.
×