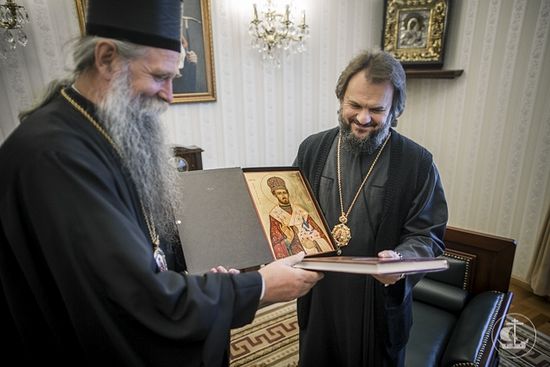 The St. Petersburg Theological Academy was visited on Wednesday by Bishop Joanikije (Micovic) of Budimlja and Nikšić of the Serbian Orthodox Church. The hierarch visited the school in order to present a gift of an icon of its holy graduate of 1916—the first Serbian bishop of America and Canada St. Mardarije (Uskokovic), reports the academy’s site.

Vladyka Joanikije recalled that the relics of St. Mardarije were found to be incorrupt last month at St. Sava's Monastery in Libertyville, IL. 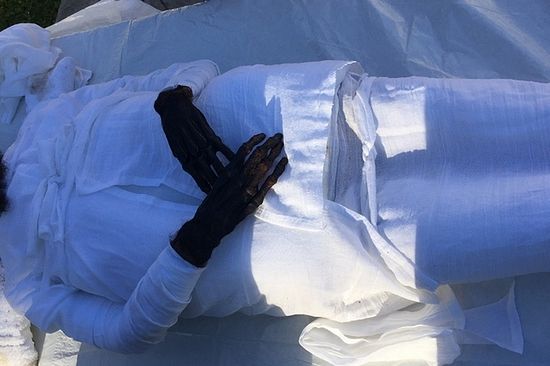 St. Mardarije was a Serbian Orthodox bishop who served tirelessly in America to build up the fledgling Church. He was officially proclaimed a saint by the Holy Synod of the Serbian Orthodox Church on May 29, 2015, and his glorification ceremony will take place July 14-16, 2017 at St. Sava Monastery.

His relics were opened on May 5 in the church at St. Sava’s, which he himself had built, and where he was buried following his repose in 1935. 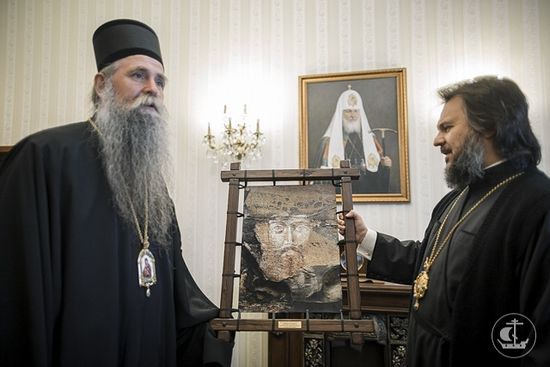 In response, the school’s grateful dean Archbishop Ambrose (Ermakov) gave Bp. Joanikije an icon of the Arhyz Face of Christ.

The St. Petersburg Theological Academy and the Serbian Orthodox Church have had very good relations for many years, thanks in part to the fact that several of the school’s graduates have edified the Serbian Church in recent times and are now numbered among the saints. Bishop Mardarije, Archimandrite Sebastian to be canonized September 5
“When one thinks of the tremendous sacrifices that these two holy apostles made, and the many sorrows that they endured, one is especially gratified that they are now universally recognized as being among the Church’s luminaries.”

His Holiness Patriarch Irinej Speaks on New Saints Mardarije and Sebastian
"And we glorify God Who has given to our people, and to all who confess our Lord Jesus Christ, for the blessing and power of the prayers of these saints whom He has glorified. May it be blessed, that they pray in the Holy Spirit, with grace and love for the people, for their prayers are powerful and full of strength. With their presence before the face of God, through their love for us, they support us, they convey our prayers to the Lord, which is a great blessing for all of us … It is a great joy, both for us and for our people, and this joy of the saints is in fact a foundation for the Church of Christ."