New, but not improved... A Response to Public Orthodoxy, on the Creed 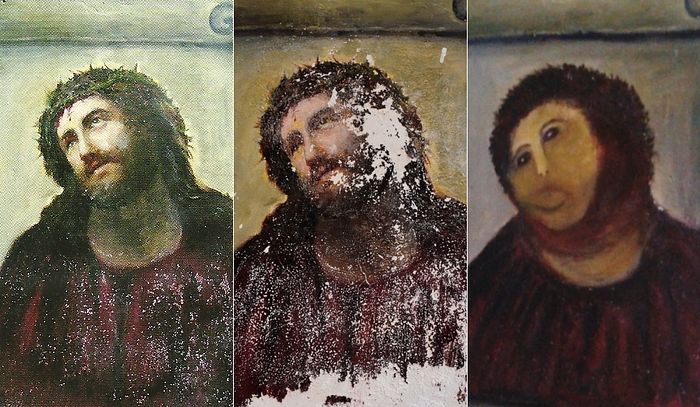 The botched restoration of the Catholic Icon "Ecce Homo!" (Behold the Man!)

Defacing the English Language, one word at a time...


John Fotopoulos and Aristotle Papanikolaou, in their recent article "Women and the Creed: Who For Us Humans and for Our Salvation," (published by "Public Orthodoxy") have expressed their unhappiness that the Greek Archdiocese has decided to use a translation of the Creed that is in line with pretty much every other translation that English speaking Orthodox Christians have been using for as long as we have had Orthodox Christians speaking English. They are offended by the use of the word "man". Here is the line of the Creed in question,as it is usually translated:

"Who for us men and for our salvation came down from the heavens, and was incarnate of the Holy Spirit and the Virgin Mary, and became man..."

And here is their suggested "improvement" to that translation:

"Who for us humans and for our salvation came down from heaven and was incarnate of the Holy Spirit and the Virgin Mary and became human..."

Aside from the fact that this sounds like a translation done by a Federation Starship's computer, it is simply ugly and unnecessary. It has long been said that the Greek Archdiocese has intentionally used the worst English translations possible, in hopes that people will just forget the whole thing, and keep using Greek. In this case, they are moving in the right direction. The folks at Public Orthodoxy, however, would have them opt for an even more ugly translation then they had previously ("Who for us and for our salvation...").

Their argument, in a nutshell, is as follows:

"...“men” is not the most accurate translation for the word ἀνθρώπους in contemporary English. Rather, translating ἀνθρώπους as “men” can be viewed, at best, as an expression of outdated English usage and, at worst, as an expression of gender exclusive English translation. There is no good reason to use outdated English in a new translation of the Creed or to use a gender exclusive English term when ἀνθρώπους is meant to be inclusive. The word ἄνθρωπος is the generic term for a human being in ancient Greek, while there are other terms for “man” and “woman.”

The PO folks may not have noticed, but the offending word "man" is also found in the word "woman". That is because a woman is a particular variety of man. The word woman comes from the Old English 'wīfman" -- "a wife man." Males use to be referred to as "werman" (a male man) but gradually the first syllable dropped out of common use. So should we opt for "wo-person" over "woman"?

A friend of mine told me about an English professor he had in college (who was a woman) who insisted on using traditional words like "man" in the generic sense, and she had a young female student who objected. The professor responded: "If you were at the beach, and you were told that there was a man-eating shark in the water, would you go swimming? Because if you wouldn't, you're a hypocrite, because you understand full well that "man" refers generically to all human beings."

If someone accidentally killed a woman, and was charged with manslaughter, I doubt a defense that hinged on manslaughter laws applying only to male victims would go very far.

The word "man" goes very deep into the history of Indo-European languages. We find a form of it in Sanskrit: "manu", which has the same meaning. To purge English of the generic use of "man" you would have to deface a good bit more of the language than just that word "man" itself. Even the word "human" has the offending "man" root word. So should we opt for "hu-person"? Or perhaps we should just go with "hu", since the last three letters in "person" might offend those who want to neuter the language. While this might expand the possibilities for future versions of the old "Who's on first?" routine, it is all just silly, and nonsensical.

The translation proposed by PO is certainly defensible in terms of accuracy, but it is indefensible in terms of the aesthetics of the English language. The reason why the King James Version has stood the test of time, whereas no other modern translation has approached its beauty is because the translators of the KJV were not just accomplished biblical scholars, well versed in the pertinent languages they were translating from -- they also were well versed in the language they were translating the Bible into. They had a sense of the English language that few scholars today have -- and clearly John Fotopoulos and Aristotle Papanikolaou are not among those few, regardless of how well they no doubt grasp the original Greek.

If we followed their proposal here consistently, we would have to make the following changes to our translations of Scripture:

Instead of Pontius Pilate referring to the blooded and beaten Christ with the words "Behold the man!" (John 19:5) we would have him say "Behold the human!"

None of these steps would be an improvement to accuracy, and they certainly would not add to the beauty and majesty of the services in which they were read.

On the broader question of neutering the English language -- there are two major languages that have no gender distinctions at all, and so the two cultures associated with these languages should have been feminist utopias, if gender neutrality was the key to such a thing. The two languages I refer to are Turkish and Chinese. However, I think one could easily defend the argument that women in European cultures have been treated significantly better in the past two thousand years, despite them having to suffer the indignities of being forced to use languages that make gender distinctions. In fact, I think one would be hard pressed to find two literate cultures in which woman have historically been treated worse than that of the Turks and the Chinese -- and I say that as one who otherwise loves Chinese culture, but the way women were (and to a large extent, still are) treated is not the high point of Chinese civilization.

To this day, Chinese girls are often killed at birth, or aborted selectively before birth, because of a very low view of the value of women. When I was in college, I once worked in a Chinese restaurant, and one day I was asked about my family by an elderly Chinese woman who worked there. When I told her that I had four brothers, she said "Your momma have five boy? Oh, she very lucky!" But my mother had five boys because she wouldn't give up trying to have a girl, until having five boys had sufficiently worn her down. One woman came from a culture with perfect gender neutrality in their language, and the other didn't. Feminists somehow think that the culture with gender distinctions is the one that needs to be fixed. Go figure.

Giacomo Sanfilippo made a comment worth passing on in response to the article at Public Orthodoxy on Facebook: "To say that ἄνθρωπος is un-gendered strikes me as a bit simplistic, and requires nuance. Gen 2 (LXX) uses ἄνθρωπος interchangeably/synonymously with Adam, going so far as to say the ἄνθρωπος (not ἀνήρ) leaves father and mother to cling to his wife."

Christ Himself also quotes this passage (Genesis 2:24) in the Gospels (Matthew 19:5), and the Greek text uses "anthropos" to refer to a male who leaves father and mother and is joined to his wife.

So clearly anthropos can be used to refer specifically to a male, just as the English word "man" can. Uncovering the Truth: Head Coverings and Revisionist Biblical Interpretation
Fr. John Whiteford
On what basis does Mark Arey present his novel interpretations as if they were the correct Orthodox understanding of this passage? Certainly not on the basis of the Fathers. Certainly not on the basis of how the Church has always understood this passage. How Christianity can stay strong in the West

How Christianity can stay strong in the West
“I realised upon reflection, that if I had spent as much time working with my hands in the soup kitchen as I did reading, my faith might have been stronger,” said Dreher. “Instead, my faith had remained something that was mostly cerebral and it did not have the strength to withstand being put to the test.” On the Non-Inevitability of Modernism
Archpriest Andrew Phillips

On the Non-Inevitability of Modernism
Archpriest Andrew Phillips
Modernists also use the same pseudo-scientific argument of inevitability to justify themselves. In a post-modernist world, their argument is particularly absurd and old-fashioned.
Comments

J Clivas7/2/2017 9:52 pm
Liberals are always offended by everything traditional.

Rdr Andreas Moran6/30/2017 6:46 pm
Mary's comment, which is not relevant to the article, requires a response: some female saints, such as Mary of Egypt, Xenia of St Petersburg and Matrona of Moscow, were not mothers or nuns. There must be many more such. And what of wives who cannot bear children?

I fully support what Fr John says in his article.

Of course they are.... they are not men! And neither women, for that matter....

It's not a question of language or translation. Those are just fig covers to hide their shame, namely their usual, consciuous attack against the divine constitutional order.

Man is synonymous of human (you-man) because God created man. Then the woman was made, out of man and for man.
God created man for His glory, and the woman for the man's glory, foreordained both to become one flesh again, because one flesh they are.

But the servants (or the playthings) of the Slanderer do not sleep at night in order to separate that one flesh at all cost.

Maybe I'm sounding like a broken record here, but I insist that these people should be excommunicated!

Isidora6/30/2017 12:31 pm
Thank you Fr. John W. for your many insightful writings. May the Lord richly bless you and Pravoslavie for bringing them to us and helping us "endure to the end."