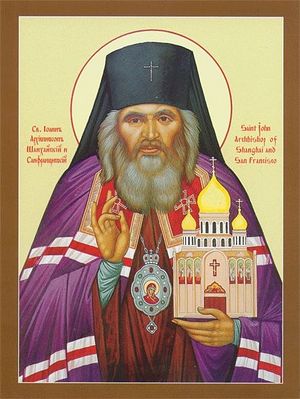 St. John (Maximovitch) of Shanghai and San Francisco was a profound ascetic and man of prayer. Thousands of miracles have occurred through his prayers, both during his lifetime and after his repose. The sick were healed, family troubles ended, and life’s difficulties abated. But of his greatest miracles we must cite the building of cathedrals among an emigrant population that barely had enough money to get by—yet the churches they built have remained as the pride of their cities.

In 1934, St. John was consecrated a bishop in Yugoslavia by Metropolitan Antony (Krapovitsky) of blessed memory, and appointed to the diocese of Shanghai, China. There he inherited a construction project that had reached a stalemate, due to the loss of the former bishop and internal parish divisions. St. John brought peace to that community, and the Cathedral of the Mother of God “Surety of Sinners” was completed. 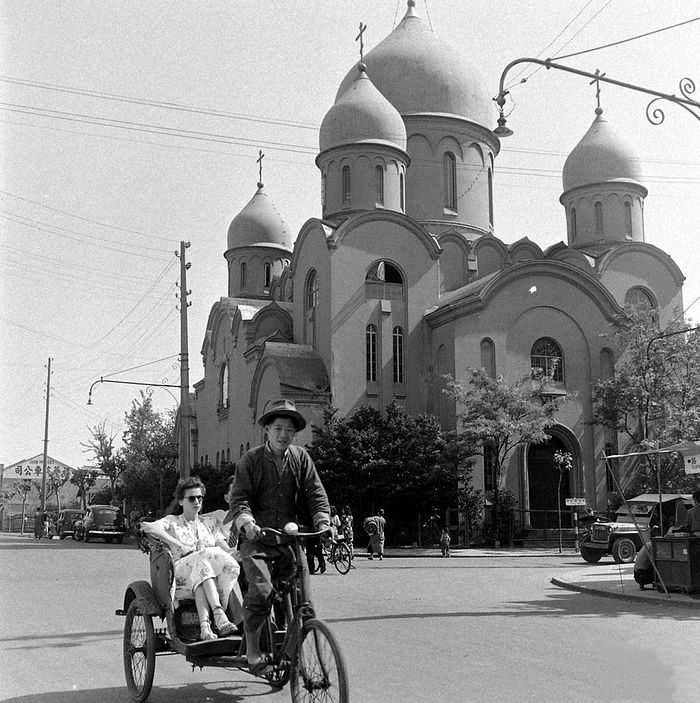 The Russian Orthodox Church of the Mother of God "Surety of Sinners", Shanghai. Photo: Russky Shanghai.

When communist rule came to China, the Russian flock was forced to find new homes. St. John took his people to Tubabao in the Philippines as a temporary refuge, but made trips to the United States to intercede in Washington D.C. for the displaced Russian population, and succeeded in getting many of them permission to move to the U.S. Meanwhile in the U.S. capital, St. John united the Russian diaspora and organized a parish there in 1949. By his prayers, a beautiful Russian Orthodox Church dedicated to St. John the Baptist and built in the traditional Yaroslavl style was already in use. This parish is still flourishing and growing today. 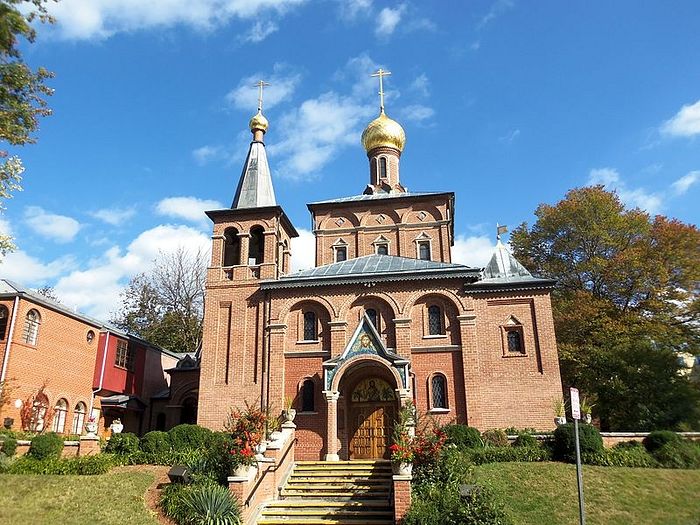 In 1951, Archbishop John was sent to Paris to rule the diocese of Western Europe of the Russian Church Abroad. In France, Archbishop John had a reunion with the nuns of Lesna Convent, who had relocated to Serbia after World War I and whose church services St. John had attended while living in in that country. The saint often served at the sisters’ new location in a former Catholic seminary in Fourqueux, just outside of Paris. After ten years in Fourqueux, the convent again had to relocate when the owner of the property did not renew their lease, and much of the grounds were being lost to city development. With nowhere to go, the sisters relied upon the prayers of their beloved archpastor. With his blessing the sisters began looking for a new place, and funds were collected. Although St. John was transferred to San Francisco in 1962, he continued to carefully follow the sisters’ progress in finding a new home, “and one of his last deeds before his death was to write a letter to Mother Feodora [then abbess of Lesna Convent] with his blessing to purchase (for an unbelievably low price!) a property found by Nun Magdalena in the village of Provemont. The letter came just a few days after the saint’s repose.”[1]

The Lesna convent is still located in this property, which includes a mansion, large grounds for gardens and orchards, and a 200-year-old church! 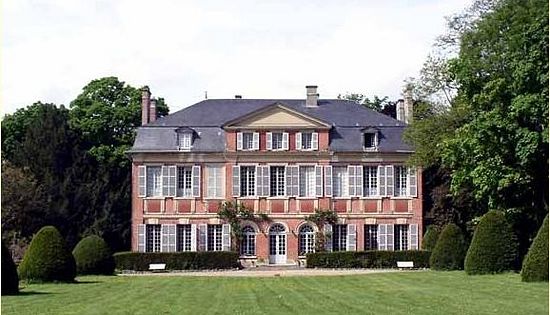 In 1962, Archbishop John (Maximovitch) was transferred from his archbishopric in Paris to San Francisco, California, to pastor his Russian flock, many of whom had moved there from Tubabao. The existing Russian parish church on Fulton Street was a converted Protestant Church, and did not resemble the traditional Russian Orthodox architecture. One of St. John’s major accomplishments in that city was to begin the construction of a new church on Geary Boulevard, and although he did not live to its consecration, he sanctified it with his relics, which have reposed within its walls from the very time of his burial. If church-builders could have an opus, the San Francisco Cathedral of the Mother of God “Joy of All Who Sorrow” would be it for St. John. Again arriving to a divided parish, St. John was able to overcome all the difficulties surrounding the construction of a new cathedral. It is said that he even stood personally on the streets of San Francisco asking for donations to build the church. It also cost him great sorrow, because the enemy of all Orthodox churches, the devil, waged fierce war against him through some of the parishioners themselves. He was even brought to a secular court for “mishandling funds”—a charge that was completely overturned by a perspicacious Irish Catholic judge. 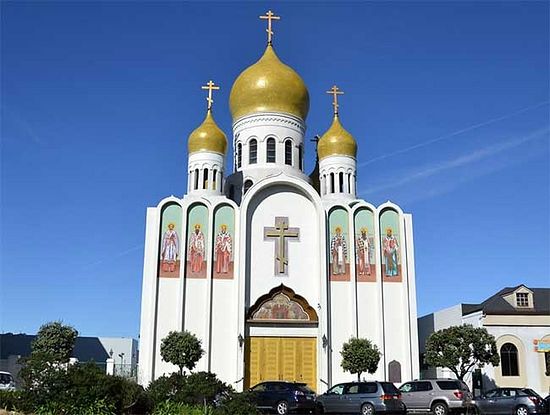 The Church of the Mother of God "Joy of All Who Sorrow", Geary Blvd., San Francisco, California. Photo: Pravoslavie.ru.

St. John loved God’s house so intensely that wherever he served, he would remain in the church long after the service. The Lesna nuns recalled that when St. John was visiting, they often did not sit down to evening trapeza until midnight, waiting for their archpastor to emerge from the church. Everywhere he went he either oversaw the building of churches or supported the same with his attention and prayers. He wrote about the godly work of building churches:

Some people are saying: “The time is not come to build the Lord’s house.” Among them are many who are buying houses for themselves, who live in their own houses in full satisfaction of their material needs, or who are selling their homes to move into better and better dwellings, increasing their assets. It is understandable when such words are heard from unbelievers…But how can they be repeated by believers who themselves go to church?

A church is a place that is consecrated, holy, in which there always dwells the grace of God. At the consecration of Solomon’s temple, the glory of the Lord in the appearance of a cloud filled the house of God. So it was in the Old Testament temple. How much more powerfully does the grace of God act in the temples of the New Testament where there is offered the true cleansing from sin, where we partake of the true Body and Blood of Christ, where during the Divine Liturgy, the Holy Spirit continually descends upon the gifts being consecrated and upon the people present? One can pray anywhere, and God hears prayers from everywhere. But it’s much easier to pray in a church where everything is conducive to prayer. From there our prayers ascend to God, and the mercies of God are sent down upon us.

The construction of a church is a sacrifice to God; to allocate a parcel of land for church services is to sacrifice unto God a part of your own property, but most of all it is a gift of your love, your zeal. Churches are not needed by God Whose throne is heaven and Whose footstool is the earth; it is we who need them. It is we who benefit from donating toward the building of churches, although the Lord accepts not so much the substances of our alms as much as He does our zeal—the quality of our effort. Christ approved the widow’s mite, saying that she had given more than anyone else, for the rich cast in a great deal from their abundance, but she gave all she had, all her livelihood. Those alms we give in the name of God are received by God Himself. Spiritually, our alms are laid up in the treasuries of heaven, God’s treasuries, from which no one can steal them away. If someone steals any church possession, he steals from God Himself.

At each Liturgy, those who contributed to the building of the church are commemorated. In building churches here on earth, we create for ourselves eternal habitations in heaven. Decades will pass, our bodies will decay, perhaps our very bones will turn to dust, but our souls will live eternally. Happy will he be who prepared for his soul a dwelling in the heavenly mansions. Even if the churches that are built should fall to ruin, the names of those who contributed to their construction will be written in God’s eternal books, and the prayers which arose from within these churches will be sealed.[2] 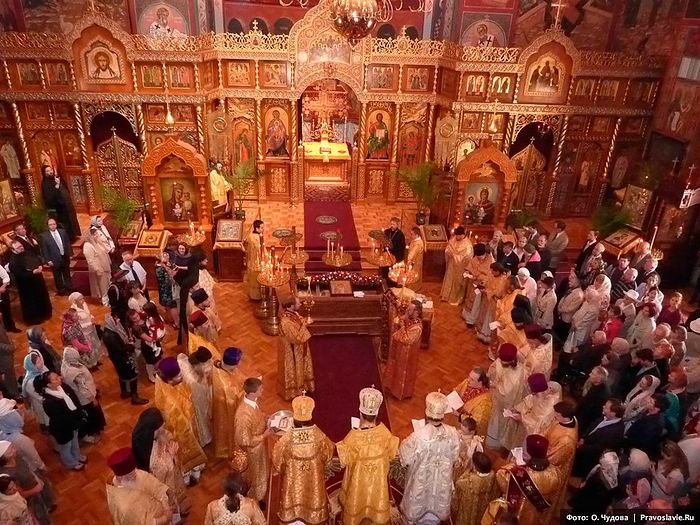 Since St. John of Shanghai’s canonization in 1994, many parishes, mostly not in the Russian Church Abroad, have desired to have St. John as their patron. We can now find a number of relatively new parishes dedicated to him across the U.S., as well as in other countries. We have found some of them as you’ll see below, but if any of our readers know of any other churches dedicated to St. John of Shanghai and San Francisco, please leave us a note in the comments section!

Parish of St.John of Shanghai and San Francisco the Miracle Worker, Framingham , Massachusetts.

Church of St. John of Shanghai and San Francisco, St. Elizabeth Convent, Minsk, Belorussia. This church is being built in the local psychiatric hospital.

Church of St. John of Shanghai and San Francisco, the village of Litvinki, Tver Province, Russia.

This list does not even mention the churches dedicated to all the saints of America, which would of course include St. John as their patron. Nor does it include all the churches that St. John may have blessed to be built.

Through the prayers of our holy father, Hierarch John of Shanghai and San Francisco, may Orthodox parishes throughout the world be strengthened in unity and zeal for the Orthodox faith, and may many, many more be built and beautified to the glory of God! “I grew up near St. John.”
Maria Potapova on St. John of Shanghai

“I grew up near St. John.”
We do feel his presence in this church. Many people come to ask for help—it is he who brings them here. And the archbishop helps them himself. It is he who should be thanked for this help. Divine Liturgy Has Been Celebrated Daily in Our Cathedral for 50 Years
Archpriest Peter Perekrestov
November 6, 2015, was the 50 th anniversary since the first Divine Liturgy was celebrated in the Cathedral of the Mother of God “Joy of All Who Sorrow” in San Francisco, CA. Protopriest Peter Perekrestov, Senior Priest of the cathedral, granted an interview to Zhurnal Moskovskoj Patriarchii (Journal of the Moscow Patriarchate).

Life and Miracles of St. John (Maximovich) of Shanghai and San Francisco—One of the Greatest Saints of the 20th Century
Bishop Alexander (Mileant)
"Sanctity is not just a virtue. It is an attainment of such spiritual heights, that the abundance of God's grace which fills the saint overflows on all who associate with him. Great is the saint's state of bliss in which they dwell contemplating the Glory of God. Being filled with love for God and man, they are responsive to man's needs, interceding before God and helping those who turn to them." Thus describing the ancient Saints, Vladyka John simultaneously summarized his own spiritual attitude which made him one of the greatest Saints of our time.
Comments

Stephan Phillips11/13/2019 8:30 pm
I just wanted to mention that in the list of Churches founded by Saint John of Shanghai and San Francicsco, and you did have a photograph of ST JOHN'S CATHEDRAL in Washington DC in your article, it is not in the the index list of the Churches dedicated to SAINT JOHN. I was an Alter boy to SAINT JOHN and my Grandfather was a deacon serving SAINT JOHN in Shanghai. I enjoyed your article, it was very informative In CHRIST stephan