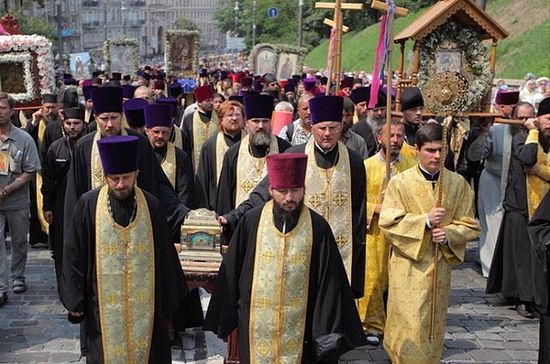 At the end of July, 11 miraculous icons of the Theotokos will be gathered from all corners of Ukraine for the traditional moleben to be celebrated on Vladimir Hill in the capital city of Ukraine, reports the Union of Orthodox Journalists.

From July 2, the icons will be taken to various dioceses of the Ukrainian Orthodox Church to be present at Divine Liturgies, akathists, and molebens to the Mother of God. All the icons are to arrive in Kiev by July 27, where the primate of the Ukrainian Orthodox Church His Beatitude Metropolitan Onuphry will celebrate the annual moleben atop Vladimir Hill.

After the moleben, the sacred icons will be carried in a cross procession to the Kiev Caves Lavra, where a festive All-Night Vigil will be served, with the solemn Divine Liturgy on the following day.

The month-long event is especially dedicated to praying for peace in Ukraine. Believers see Cross in sky, Crucifix streams myrrh during prayers outside Ukrainian Parliament
Around 10,000 faithful Ukrainians gathered outside the Verkhovna Rada yesterday to prayerfully protest bills No. 4128 and 4511, which threatened to forbid and seize the churches of the Ukrainian Church of the Moscow Patriarchate, as it is centered in a state deemed an “aggressor” by the Ukrainian government, and which were on the day’s parliamentary agenda.