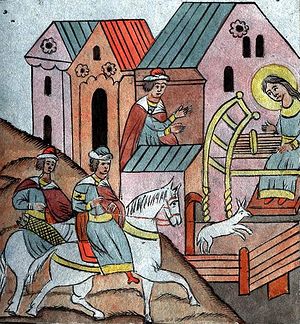 For several years now, there has been a state holiday of family, love, and fidelity in our Fatherland, timed to the Church commemoration of the holy spouses Peter and Febronia. It is gratifying that in an age of extreme frivolity and depravity of morals, we can at least hear words calling us to the family ideal!

Recalling the virtuous husbands and wives of the Russian Middle Ages, their distant descendants today experience a variety of feelings, living according to a conscience strengthened in the good intention of carrying the candle of mutual spousal love to its victorious end. Oscillating and weak, and fond of all kinds of temptations, they are internally encouraged and find within themselves the strength to overcome the obstacles sprouting upon the path to familial happiness. Cynical and depraved, they sneer with irony and darken, oppressed by the knowledge of their own crimes against the true and high love. Only the ignorant remain indifferent, closed off from the light of God in their sweltering little world of hearts darkened by vanity, which are foreign to “the Godhead, inspiration, tears, life, and love…”1

And still, the human soul cannot falter when it hears about marital harmony, about indestructible happiness, about love, alien treachery, and betrayal! Why? Because “the feat is in battle,”2 amidst the bullets and arrows, but there is a feat hidden and unseen, under the outer covering of an ordinary, quiet life.

Genuine human love is distinguished by the dignity of having loyalty and constancy! These qualities are a beautiful thread running through all the best works of Russian literature—from the ancient “Yaroslavna’s Lament” to the inspired pages of War and Peace, and family histories, sprouting up in novel-sages of comic proportion.

Opposing the ideal family is wicked lust, which we hesitate to even call animalistic… After all, the world of the mute has so many wondrous examples of loyalty unto self-sacrifice! Not so simple Russian women were called in olden times “pen-swans,” so graceful in their majestic modesty! “Cob-swans,” those wondrous birds, when they find themselves a mate will never exchange her; and long-legged, white-winged storks, they say, fall from a great height in the event of the unexpected death of their other halves.

Recall for our conversation, friends, one remarkable episode from the life of Sts. Peter and Febronia. One day, whilst traveling down the river, the virtuous princess attracted the passionate and insatiable stares of the nobleman in the circle of the closest companions of the Murom prince. Addressing the boyar, the righteous Febronia asked him to bend down and, having scooped a handful of water from the left side, to drink it. He silently obeyed. Then the wise woman commanded her secret admirer to take a sip of the river’s drink, taken from the right of the boat. “How does the water taste?” asked the God-pleaser. “Exactly the same on both sides.” “How can you shamelessly look at another’s wife, although you certainly know that women’s nature is always one and the same?” the holy Febronia sternly asked, shaming and immediately cooling the libertine’s passion.

The misery of “the eyes of the covetous and the hands of the greedy!” How many of them are now in Russia, trapped alive by the devil in his web of destruction, hunters of foreign flesh! The word of God strikes the miserable with lightning from heaven, broadcasting through the holy apostle Paul: Marriage is honourable in all, and the bed undefiled: but whoremongers and adulterers God will judge (Heb. 13:4).

Have you seen among the latter even one who is calm, peaceful, and happy? They would like to present themselves as such to people, however, you can’t hide an awl in a sack. This awl is the crime of lustful passion, searing the conscience by hellfire, leaving no residue, and constantly dragging its sacrifice in search of new, shameless adventures, culminating in a usually-incurable disease, or an evil and cheerless death. But enough about that.

Spousal love, sanctified by faith in the Heavenly Father and anchored by the grace of marriage, is beautiful. No doubt, it demands an entire life’s struggle and mutual sacrificial labors for its preservation and growth. However, great is the reward! We have in mind not only “rewards in Heaven,” but also earthly recompense. What is it? First, that very love which is like a wondrous blossom. It spreads the subtle scents of joy, tenderness, fidelity, delicateness, and inner modesty far around itself, and mutual understanding, unity, and discernment, devoid of suspicion and distrust. Second, it is children, if God grants. Fornicators are concerned only with themselves and their impure pleasures, alien to the calling of fatherhood and motherhood. Loving spouses with a Christian self-consciousness are reverent before the gift of life and see in procreation the miracle of God’s blessing. Love is an undeniable witness to truth. No matter how difficult it is for adults to rear their children now, the latter, as yet possessing neither experience nor wisdom, will always feel their parents’ inner righteousness with their hearts, and in the end, come to a conscious appreciation of them for the gift of life. Is not sincere affection and reverence on the part of children a reward? Is it not the crown of happiness on the gray-hair-adorned heads of parents?

“Blessed are the credulous for they are carefree!”3 Blessed is he who believes in love in our “cursed days!”4 This faith is founded not upon dreams and daydreams, but upon the unshakable foundation of the Love of the crucified and resurrected one—our Lord Jesus Christ, Who is the same yesterday, and today, and forever (Heb. 13:8).

“The darker the night, the brighter the stars…”5 Noting in these July days of the feast of the family, I would call faithful and loving Christian spouses “confessors.” In spite of all hostile maelstroms soaring above the Russian land, they firmly hold the candle of “undying love” and aspire to the footsteps of their pious ancestors in the quiet harbor of salvation, paying no heed to the hooting and howling of the corrupt mass media and to the absence of inspiring examples in life.

My friends, let the bright and hot flame of joyful family service to one another ignite in our hearts, dispelling the gloom of coldness, depravity, and treachery! He that endureth [in love] to the end shall be saved (Mt. 10:22)—God Himself promises this to Orthodox spouses.

1 Pushkin, “I Remember a Wonderful Moment”

3 “Woe from Wit,” A. S. Griboyedov, as translated by A.S.Vagapov, at http://vagalecs.narod.ru/Woe.htm

4 Cursed Days (Окаянные Дни) is the title of a book by Ivan Bunin.

5 From an untitled poem of Apollon Maikov.

They Lived Happily and Died on the Same Day
Archpriest Pavel Gumerov
he task of family as “the little church” is the same as that of the universal Church—to enter into the Kingdom of God the Father together. It is not without reason that the apostle Paul says: Charity never faileth (1 Cor. 13:8). An attribute of true love is that it lasts forever. On Finding Your Other Half
Archpriest Artemy Vladimirov
In order not to fall for stereotypes and not lose that one and only person, one must not be carried away, as King Solomon teaches us, by external good looks, elegant facial features and figure, and not walk on the leash of the lust of the eyes. Goats, mules, and rams are distinguished by this not so clever art. The ability to see the personality itself, the traits and qualities of the soul is a rare capability amongst the young, who are more inclined to get carried away than older people made wise by experience.
Comments