St. Photius: On the Essence of Icons 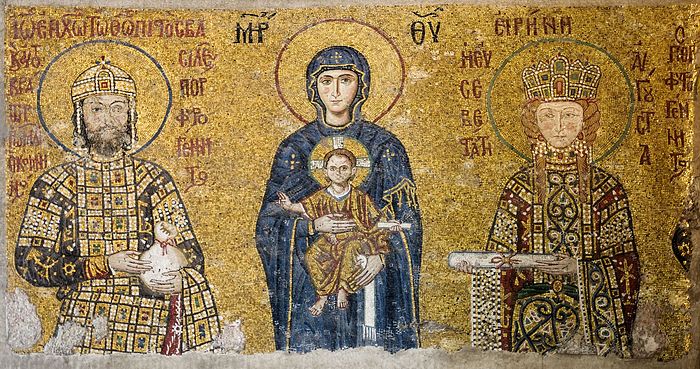 St. Photius, Patriarch of Constantinople, preached a sermon on the day the icon of the Theotokos was dedicated in Hagia Sophia, 29 March 867. In the notes introducing the English translation of the sermon, we find this comment:

“In the eyes of Photius, painting is the most direct form of instruction, for a picture that is in agreement with religious truth contains the eidos, or essence, of the prototype, which is in turn apprehended by the faculty of sight and indelibly imprinted upon the mind. A painter is guided by divine inspiration, so that his work is not merely mimetic, but contains an actual share of the prototype. One would look in vain for a better expression of Byzantine art theory.” (Cyril Mango, THE HOMILIES OF PHOTIUS PATRIARCH OF CONSTANTINOPLE, pp 282-283)

For the Byzantine Christians, the icon was even more powerful/truthful than the written texts because the icon shares in the prototype. It is hard for us to imagine a time when the presuppositions and perspective of the people are different than our own. There was a time when people heard the phrase, “the word of God”, it was not the Bible that came to mind, instead they would have thought, Jesus Christ.

Living in the literary culture of the 21st Century, and being shaped by the literary tradition of recent centuries, it is hard to imagine that at one time Christians, like Photius, thought the pictured icon to be “truer” than the written text – a more certain witness to the incarnation of Jesus Christ. Our modern penchant for scholarship has increased this idolization of the text, which, when combined with cultural literalism, proves to be deadly, as St. Paul says. Just read 2 Corinthians 3 in the light of Photius’ idea that the painted text shares in the prototype. Christian don’t have to rely only on a printed text, we have icons – we are icons of God, created in God’s image!

You yourselves are our letter of recommendation, written on your hearts, to be known and read by all men; and you show that you are a letter from Christ delivered by us, written not with ink but with the Spirit of the living God, not on tablets of stone but on tablets of human hearts. . . . God, who has made us competent to be ministers of a new covenant, not in a written code but in the Spirit; for the written code kills, but the Spirit gives life.

Now if the dispensation of death, carved in letters on stone, came with such splendor that the Israelites could not look at Moses’ face because of its brightness, fading as this was, will not the dispensation of the Spirit be attended with greater splendor? . . . Since we have such a hope, we are very bold, not like Moses, who put a veil over his face so that the Israelites might not see the end of the fading splendor. But their minds were hardened; for to this day, when they read the old covenant, that same veil remains unlifted, because only through Christ is it taken away. Yes, to this day whenever Moses is read a veil lies over their minds; but when a man turns to the Lord the veil is removed. Now the Lord is the Spirit, and where the Spirit of the Lord is, there is freedom. And we all, with unveiled face, beholding the glory of the Lord, are being changed into his likeness from one degree of glory to another; for this comes from the Lord who is the Spirit.

When we turn to the Lord . . . . which we can really do when we turn to look at an icon, we see the splendor of God. Most miraculous of all is that we can look upon Christ in an icon and we do not have to put on a veil, as Moses did to protect the Israelites from the glory of God shining forth in his face. And, we are changed by looking at the icon of Christ into His likeness. This is how the icon serves a better purpose than the scriptures themselves. The incarnation of Christ our God has changed the very nature of the world. Reveal Your Saints and You Reveal Your Church
Gabe Martini
For many, this event is little more than a well-leveraged commemoration of an extended olive branch between these two ancient, Christian faiths. For others, concern over the future of their respective churches takes center stage. Will this event be used as an impetus for doctrinal compromise? Will the future of either Eastern Orthodoxy or Roman catholicism hang in the balance as a result of this pending exchange of pleasantries?
Comments