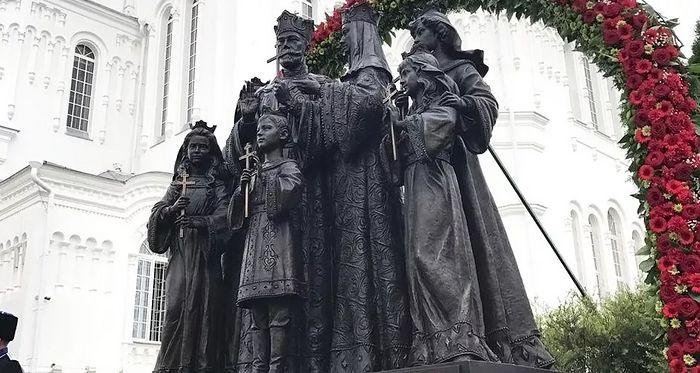 A monument to the family of the last Russian emperor, the holy Royal Martyrs, created with people’s donations from across the country, opened today on the Holy Trinity Cathedral square at the St. Seraphim-Diveyevo Convent, reports Foma.

“Perhaps it is symbolic that this monument has been installed precisely in the holy Diveyevo Monastery. Recall that the Romanov family had a direct bearing on the canonization of Seraphim of Sarov, and Nicholas II and his whole family were deeply religious; they piously believed and observed the canons of Orthodoxy,” said Valery Shantsev at the opening of the monument.

For his part, Met. Barsanuphius stated, “As soon as the people stop honoring the Heavenly King, at the same time they stop honoring the earthly king.” “The more we believe in God, the stronger will be our Fatherland… [Christ] did not teach changing the system of government by revolution. He taught us to change ourselves,” the hierarch added.

The opening was also attended by a delegation from Japan, from the Prefecture of Kagoshima, headed by Japanese parliament deputy and member of the parliamentary League of Japanese-Russian Friendship Noma Takeshi and president of the council for support of Satsumo-Russian Relations Akahori Norio.

As is known, in 1891, then-tsarevich and heir to the Russian throne Nicholas Alexandrovich traveled to Japan, where an attempt was made on his life. The Japanese delegation brought cherry tree saplings to plant near the monument as a tribute to the royal family.

The monument was sculpted by Irina Makarova, lecturer at the Academy of Painting, Sculpture, and Architecture of Ilya Glazunov. It was cast in Zhukovsky and transferred to Diveyevo for installation at the end of July. Diveyevo Golgotha
New Martyrs of Diveyevo Convent
Elena Balashova
A metropolitan, a bishop, rural priests, Diveyevo nuns, a “fool-for-Christ” and her cell attendants… They suffered for Christ in different ways, but all stood firmly in their faith. And it was Diveyevo Convent that connected all of them.