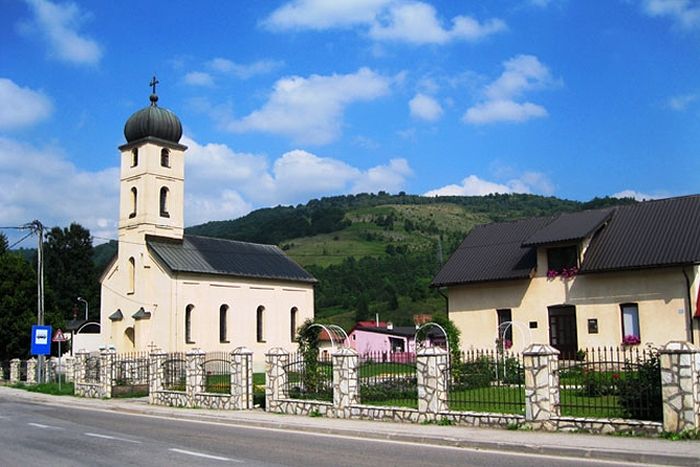 A memorial service was held on Tuesdya, August 1, in the Church of St. George in Trnovo (Bosnia and Herzegovina) in honor of the 124 Serbian civilians and Orthodox priest Nedelko Popovich, who were brutally murdered 25 years ago by members of the Croatian-Muslim military units, reports pravoslavie.ru.

The massacre of the civilians was carried out with particular cruelty. Muslims from the nearby village of Dejcici tortured and then killed the Trnovo Orthodox priest Nedelko Popovich, and his church was set ablaze. Among those killed, nearly half were women, plus four children, the youngest of which was 18 months old. In some cases, entire families were slaughtered.

13 localities were burned and destroyed in the surrounding area, Serbs were expelled from 14 localities, there are four known locations of mass murder of the Serbian population, and the remains of 11 murdered people have thus far been found.

The vice president of the Organization of Families of the Killed, Captured, and Missing Persons of Trnovo Goran Timotia noted that no one has yet answered for these crimes, although the criminals are known and appeals to the judicial authorities of Bosnia and Herzegovina with a demand to begin executing their duties were sent long ago. No one has answered for the killings in Trnovo for a quarter of a century already.

According to Timotia, the courts of Bosnia and Herzegovina administer justice selectively. Many of the relatives of the victims have already passed, not living long enough to see justice being served for the crimes 25 years ago.

Timotia also stressed that the organization fully supports the government of Republika Srpska, but it can do nothing against those who influence the work of the courts and prosecutors’ offices in the rest of Bosnia and Herzegovina. 12 years since wave of anti-Serb violence in Kosovo Ten Years Since March Pogrom Against Serbs In Kosovo
It is ten years today since a pogrom was committed against Serbs in Kosovo-Metohija (KiM) and its order-givers and organizers from Albanian political and paramilitary structures have still remained unnamed and unpunished.
Comments

T.8/8/2017 12:06 am
@JEinCA
Many westerners are not fooled, however. We know all about the 4th "crusade", the Teutonics, the Ustasa, Bolsheviks, the western support for terrorists against the former legitimate elected government of Afghanistan, and the Zionists, and the Turks, and the western plot to destroy Orthodox nations one by one, just as they ensured that Yugoslavia was destroyed, and what the west is trying to do in the Ukraine and Syria. What are we to do about it, though?

JEinCA8/7/2017 10:33 am
No one will answer for the crimes in this life as long as Washington, London and Brussels are sponsors of those guilty of the crimes. Notice this pattern in Libya and Syria too where government forces and their leaders who are in opposition to the NATO powers are culpable for alleged war crimes but NATO backed "rebels" are not.
×