A Study by American Researchers: Is Facebook To Blame For Divorces? 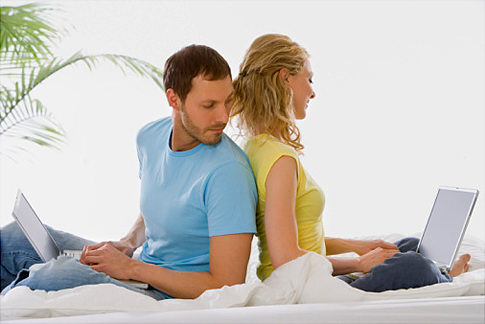 “I’ve fallen into a net, and there’s no way out of it,” this is what Viktor Tsoi[1] sang in the mid-1980s. How could he know about our life today and our current epidemic of social networks? Clearly, the musician had different things in mind and he couldn’t even guess that this plague of social media would come. And here is yet another proof of the great power of words of a true poet—words that can very unexpectedly and accurately define and describe the phenomena that are yet to appear.

However, at first there was mobile communication, then text messages, chats, and forums. But over the past ten years social networks like Facebook, Twitter, and others have become aggressively dominant. They first softly became a part of our lives and then won an overwhelming victory in the style of Julius Caesar: “Veni, vidi, vici” (“I came; I saw; I conquered” from Latin). Isn’t it awful that this happened so fast!... Mark Zuckerberg launched Facebook from his dormitory room at Harvard University in February 2004. At first only students of this American university could use it, but by September 2006, the network became accessible to everyone above the age of sixteen and with a valid email address. Now Facebook has 2 billion monthly users (1.968 billion users as of April 2017—the total number has doubled since August 2015 when there were 1 billion active users). Frequenters of Facebook create 6 billion likes and comments every day and publish 300 million photographs, while Zuckerberg has become the youngest billionaire in the world.

Many believe that the apprehensions regarding the “epidemic” of virtual communication, social media and advanced information technologies are groundless. They argue that communications technology is no more than a tool. It is like a shovel—it depends on every individual person who takes it in his hand. A knife is good in the hands of a cook, but bad in the hands of a killer.

However, even scientific research testifies to the fact that social networks are not so harmless and they are not just a “neutral technology”. In this sense, an article by the American psychologists and mass media experts Russell Clayton and Jessica R. Smith, entitled “Cheating, Breakup, and Divorce: Is Facebook Use to Blame?” is very interesting. It was published in the journal: Cyberpsychology, Behavior, and Social Networking in 2013.

The article provides the results of a survey, conducted by the researchers in order to find out if excessive use of Facebook results in any negative effects on relationships between people, especially romantic and family relationships. According to the article, its authors decided to test the hypothesis: “If somebody often uses Facebook, can it harm his interpersonal relationships?” To put it simply, the psychologists Russell Clayton and Jessica R. Smith decided to answer the question: “is Facebook a factor in the increasing rates of cheating, breakup, and divorce of people who still love each other?”

It should be noted that the survey was conducted not only among spouses, and so the following terms are used in the article: “partners in a relationship”; “romantic” or “personal relationships” and so on. Well, as the reality is, so is the language that describes it.

They polled 205 active Facebook users, mainly students, though there were also much older respondents—up to the age of eighty-two! The respondents were asked to answer sixteen questions on the frequency of their Facebook use and whether they ever had conflicts with their partners (in relationships) because of the overuse of this social networking service. The final part of the survey was devoted to possible cases of separation, divorce and infidelity caused by frequent activity on Facebook.

And this is what the American researchers found as a result of this study.

Firstly, the more you use Facebook, the higher the risk of a conflict with your partner because of some Facebook topic. For example, someone wrote something that your partner (in relationship) did not like, and this caused an argument, and then, a conflict.

Secondly, although (according to the findings of Russell Clayton and Jessica R. Smith) a direct correlation between the active use of Facebook and termination of a relationship is not quite evident, the risk of a breakup increases if partners begin to argue and quarrel with each other over some Facebook issues.

Thus, the active use of Facebook will not inevitably lead partners or spouses to their separation and an end to their relationship. However, once conflicts have started, couples should think very seriously—what if this may result in worse consequences?

Interestingly, they cite another study, according to which over eighty per cent of American elite divorce attorneys believe that the social networking service of Facebook plays a certain role in divorce proceedings.

But here are their main conclusions: Negative effects of Facebook primarily concern the couples who have been dating (or have been together) for less than three years. The psychologists divided all the couple respondents into two categories: those who had been in relationships for less than three years and more than three years. And they found that Facebook-related conflicts and possible breakups are more likely among representatives of the first category. Their relationships had probably not become strong enough yet or had not stood the test of time. The main factor that provokes separation is when one of the partners is caught red-handed viewing the webpage or profile of his/her ex-romantic partner or corresponding with him/her (moreover, Facebook is very convenient in this respect). Such situations understandably provoke jealousy and in may all likelihood lead to conflicts or even complete separation.

So, we can draw the following conclusion: Young couples should be very cautious and wise in using social networks, and they shouldn’t spend much time on them, all the more so because they have provoked heated arguments and rows.

Meanwhile, the authors of the article are rather careful in drawing conclusions and don’t “speak straight from the shoulder”. They stress the need for a further study. The survey itself is not very representative because of the relatively small sample size (205 people were canvassed in total) and some formulations were perhaps not strict enough.

Nevertheless, at least their preliminary conclusions encourage us to think carefully once again. How can it be so? Social networks, which seemingly are supposed to unite people, prove to be destructive instruments that alienate people from one another. Apparently, maintaining constant virtual communication, the illusory ease of communication on social media, and the possibility of simultaneous communication with many people turn out to be detrimental to real, live contact. What is supposed to help you avoid loneliness makes you feel more alone and hopeless. It would be wiser at times to turn off the internet and computer and to go for a walk in the park, go to the cinema together, or simply stroll about in the streets. Spend more time together with your nearest and dearest.

[1] Viktor Robertovich Tsoi (1962-1990) was a Russian musician, poet and singer who founded the legendary Kino (“Cinema”) rock band in the early 1980s which was destined to become one of the most famous, successful and influential bands in Russian national history. In his songs Tsoi raised inner, deep philosophical themes and questions (for example, the purpose of life)—one of the first Soviet musicians to do so. His lyric songs along with those on social and political themes are famous, too. He died in a car collision aged twenty-eight. Today, after twenty-seven years, the songs of Kino are still very relevant and loved by many in Russia and even far beyond. Together with another highly talented song-writer and poet, Igor Talkov (1956-1991) who was killed by an unidentified person during a concert in St. Petersburg, Tsoi is nicknamed by some as a “prophet”.—Trans.
See also Don’t Trade Christ For “Likes”! Russian Pastors on “Virtual” Life and Innermost Thoughts
What Christians should do in order not to “drown” in this sea of words which have become worthless?

Archpriest Maxim Kozlov advises "tight control of personal presence on social networks"
"Most of those who tend to give up social networks during Lent finally realize that most of what they find there is not beneficial, and not spiritual reading at all. And that their posts are not usually full of love for their neighbors but of showing off their lives and rushing for unnecessary information which burdens their consciences and minds, and at the same time is absolutely useless". Recent Research Reveals How Facebook Causes Envy & Jealousy
Several new studies have revealed that Facebook makes countless people feel bad about themselves, leading to anger and hate against other people. Why? Because of envy and jealousy.
Comments
×