Georgian prisoners in Turkey on hunger strike for place to pray 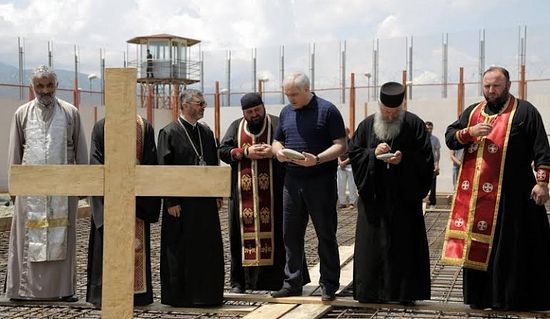 
150 Georgian citizens, serving sentences for various crimes in Turkey, have declared a hunger strike in their Constantinople prison. Among their demands is an area for prayer, reports Georgian news station Rustavi-2.

Family members of the prisoners speak about cruelty to convicts and have accused diplomatic representatives of negligence.

“150 prisoners, all Georgians, are on a hunger strike,” already on the fourth day, according to Irma Keinishivili, the wife of one of the participating prisoners. Their grievances and demands include better food and better overall treatment, as well as a place and materials to build a prayer corner, to offer their Orthodox prayers to God. “We have officially applied to the embassy, but nothing has been done,” Keinishvili explained.

According to the Georgian Foreign Ministry, the Consulate General in Istanbul has received a message about the ongoing hunger strike from the parents of one of the prisoners, reports Novosti-Gruzia. “The consulate has contacted the Prosecutor’s Office in Istanbul and the agency for carrying out sentencing… According to the explanation of the prisoners, of the reasons for beginning the hunger strike is the demand to meet with a Georgian priest,” the ministry’s statement read.

Representatives of the Georgian General Consulate intend to meet with the prisoners after receiving proper authorization, although the Foreign Ministry’s message also notes that the prisoners should already have all the materials they need for a space to pray.

For its part, the Georgian Patriarchate will do its best to help the prisoners, patriarchal secretary Fr. Michael Botkoveli told InterpressNews after learning of the hunger strike on the internet. St. Philaret of Moscow: Daily Prayer and Prayer of the Prisoner
St. Philaret of Moscow
St. Philaret left a voluminous inheritance of what can be truly called patristic works. He also composed prayers, one of which has become for many a part of many people’s morning prayers. It is a prayer not for what we want, but for what God wills—that He would always be before us, working in us His Holy will.
Comments
×