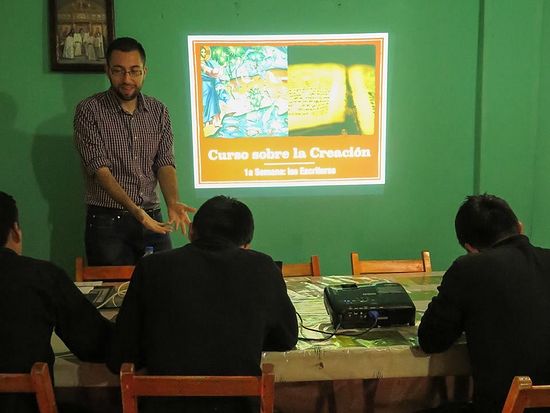 A new seminary program has begun training eager candidates in Guatemala, where the Orthodox Church is rapidly growing, missionary to Guatemala and Mexico Jesse Brandow writes on his Facebook page.

The program aims to educate leaders of all types in the Church, whether clerical or lay, and features instruction on-site and via Skype.

“Today we began a new seminary program in Aguacate, Guatemala,” Brandow wrote yesterday. “It is a two-year series of courses for people in Guatemala who hope to serve as deacons, priests, or in other capacities in the Church. It is being taught both by missionaries on-site in Guatemala and via Skype by Spanish-speakers in the USA,” he continues.

The new program has a small but zealous group of students: “Currently we have 5 students in the program—young men who live in Aguacate and are exploring the possibility of ordained ministry. Please pray for all of us in the Seminary of St. Andrew!”

Catechism is also conducted via workshops for thousands of lay leaders in Mexico and Guatemala. Jesse Brandow writes in May of a two-day workshop taking place in Tziscao, Mexico.

500,000 Guatemalans were received into the Ecumenical Patriarchate in January, 2010, and more individuals and entire communities have been entering the holy Orthodox Church since then. Orthodoxy in Ixcan: A Story of Resilient Faith
Fr. John Chakos
I visited the faithful of Ixcan with Father Andres nearly four years ago for the first time. What I found was a faithful remnant living in the most humble of circumstances and praying in weathered shanty-like structures consisting of wooden slats, dirt floors covered with fragrant pine needles, and rusty tin roofs, from which colorful streamers hung. I call these the cathedrals of the poor, magnificent in their unassuming simplicity. Orthodox Church Opens Medical Clinic in Guatemala
When the people of Aguacate crowded into this new clinic on August 20th, they asked “why us?” with a sense of awe and bewilderment.