Are the Saints Really Alive (and should we speak to them)? 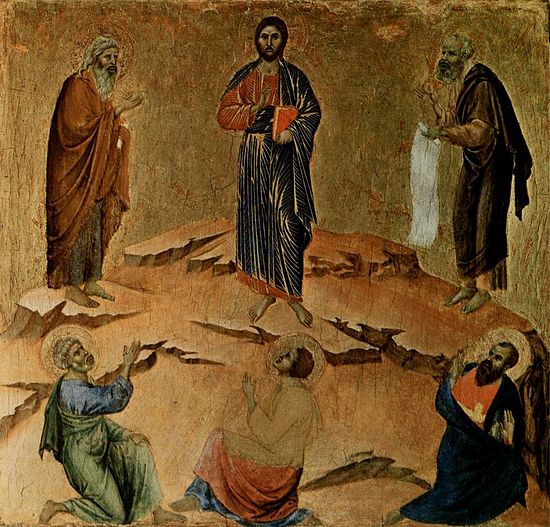 The Reading from the Holy Gospel according to St. Matthew. (17:1-9)

Blessed Feastday! On Tuesday evening we sung the Paraklesis (Canon of supplication) and afterwards as I was saying a few words about Our Lady the Mother of God, I told those who were present that today I would prove that the saints are really truly alive. I will go even further today and prove to you that it is indeed biblical to not only believe in the saints but even to speak with the saints!

In today’s gospel we are told that Our Lord Jesus took Peter, James and John and led them high up a mountain, away from the other disciples. We note here that while there were twelve disciples, the Lord had a special relationship with these three and according to His will and His purposes, He chooses only these three to reveal His glory and His majesty in a particular and significant way. As they were all together, high atop the mountain, we are told that the Lord “was transfigured before them, and His face shone like the sun, and His garments became white as light.” From this we see that the Lord is not simply reflecting light from somewhere else. He is revealing Himself as the light of the world.

One of the most prominent descriptions throughout the Scriptures regarding God and the Divine is the image of light and fire. On this day the Lord displays this glory of His divinity for His disciples. He is not simply the long-awaited Messiah of the Jews. He is the one who appears as fire within the burning bush. He is the one who appears as a pillar of flame before the Jews in the wilderness. He is one with His Father and the Holy Spirit.

After the Lord was transfigured this is what the gospel tells us “And behold, there appeared to them Moses and Elijah, talking with Him.” My brothers and sister, I promised to prove to you, beyond a shadow of a doubt, that saints exist and that they are truly alive. I also promised to prove to you that it is right and proper to speak with the saints. Rather, it is the Lord Jesus who demonstrates the truth of this matter. Moses and Elijah appeared and they spoke with Jesus! Moses had died and was buried thousands of years earlier, and Elijah had been translated to heaven many years before the time of Jesus. Yet they both appear fully alive, fully present at this miraculous event. The passage could not be any clearer. Far from being some vision that only the Lord could see, Peter and the other disciples also saw these men and they were amazed. We should also be amazed. The kingdom of God is rarely as we imagine it. It is infinitely more grand, beautiful and alive than we can possibly conceive. Not only are the saints alive. Not only should we speak to them…we should also become saints ourselves!

The saints, those who love God and obey His teachings, are also much more alive than we can imagine. They radiate the light of God through the Holy Spirit. As we have mentioned in the past, they are like candles that are lit off of the great flame of the divinity of God. In fact, as I was studying this week, I happened to read the passage in Exodus where Moses goes up on the mountain for 40 days, neither eating nor drinking, and he speaks with God and waits for the tablets of the law to be made once again. Do you know what happens to Moses after 40 days of fasting and speaking with God? His face glows! When he leaves the mountain, the people can barely look at him from the brightness of his appearance and in fact he wears a veil. Such is the power of the presence of God in the life of one who loves Him.

The great feast of transfiguration was a special moment in the life of the disciples. It didn’t make sense to them yet but later, after the Lord’s resurrection and ascension, it became perfectly clear. Jesus is the king of glory who demonstrated a small taste of that glory to His inner circle. But there is more! Because we worship the God who is love, we know that He is not content to hoard His glory and keep it only for Himself. Our Orthodox Christian concept of salvation is to share, experience and fully partake in the glory of God. In order for us to fully experience this we will also need to be brave enough to go through the trials, temptations, tribulations and sufferings that come our way. There is for us, no glory without the life of the cross as our prerequisite. There is no Christian life without carrying the cross, because it is by the cross that we are saved.

God is glorified in His saints and the saints are glorified through their struggles to live the life of self-emptying, which is the life of Christ. The Lord did not need to take flesh and become a man. The Lord did not need to suffer temptation, hunger and thirst. The Lord did not need to suffer betrayal, injustice, spitting, and the cruelty of the cross. He chose them through His humble condescension to be like His people, the people whom He loved. Yet through all of this, the transfiguration tells us that there is much more than meets the eye. Jesus Christ is full of majesty, glory and power. This is the power that is poured out on all of the saints who love Him and bring their life into alignment with the teachings and example of the Lord. May we boldly accept the daily life of crucifixion that we might be transformed through the grace of the Holy Spirit and receive the light of the glory of God. AMEN. Excerpts from Sermons: "We came into this world to become similar to God"

Excerpts from Sermons: "We came into this world to become similar to God"
The modern world is based on advertising. To make people pay attention to something, to thrill them, you need to find a sensation and something bright. But in the Christian life everything is quiet and peaceful. The more quiet a person is, the less attention a person demands, the humbler a person behaves, then the more grateful to God he is, the stronger the Holy Spirit supports him. The Holy Spirit is a Quiet Light. The Quiet Light of God’s love.

Prayer on the feast of the Transfiguration
Archimandrite Iachint Unciuleac
Come to us again, O Jesus—do not listen to Peter! Come down from Tabor and come to our homes, into our hearts! Come here, where we are suffering and laboring for our daily bread! Come here, where we are crucified by people, demons, and passions! If Peter does not want to come down, leave him on the mount and come to us, to our hearts!
Comments

Savio8/21/2017 3:33 pm
Ramez, probably it is different context. God will not give His glory to other (Isaiah 42:8) probably means that nobody will be worshiped as God, but God only. That is how I see it. Maybe I am wrong.
But we as humans will take part in divine life trough grace - uncreated energies of Holy Spirit, because we are the living tample of God

The passage in Isaiah is a prophetic reference to the future Messiah, Christ, not concerning the bounty of salvation that comes to the world though Christ.

Ramez8/20/2017 10:01 pm
Greetings father. You say "Our Orthodox Christian concept of salvation is to share, experience and fully partake in the glory of God."
And in Isaiah 42:8 we read "My glory I give not to another."
How do we reconcile the two?