Relics of Queen Ketevan will be in Georgia for six months 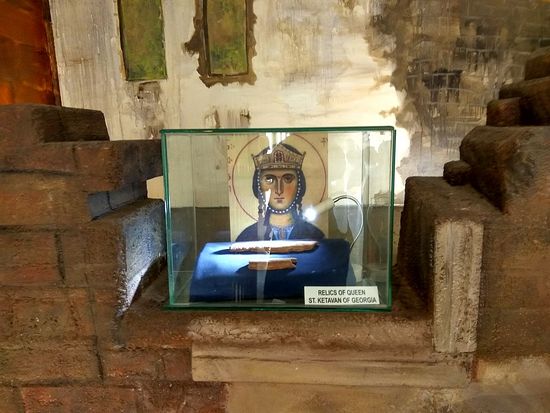 
The relics of Georgia’s saint, Queen Ketevan, will be in Georgia for a half-year according to an agreement reached after long negotiations between representatives from Georgia and India. Georgia is hosting exhibitions and international conferences dedicated to the holy martyr Queen Ketevan, reports Georgia Online.

The Ministry of Culture and Preservation of Monuments and the Ministry of Foreign Affairs of Georgia, with the participation of the Georgian Patriarchate, will be providing transportation for the holy martyr’s relics to various regions of Georgia, and organizing exhibitions and international conferences.

According to information from the Ministry of Culture, particles of the relics will be brought to the National museum and the Holy Trinity Church (Sameba) in Tbilisi, and then to other dioceses in Georgia.

Queen Ketevan was married to the heir of the throne of Kekheti, but was left a widow at his untimely death. The king had two other sons, George and Constantine, the latter of which was raised in the court of the Persian Shah and converted to Islam. At the Shah’s request the apostate from Orthodoxy murdered the king, his father, and his brother, the heir. Because of his crime and insolent demand to take Ketevan as his wife, the nobles executed him.

Georgia was subject to Persia at that time in history, and therefore Ketevan needed the Shah’s permission to place her son on the throne. This was granted but eventually Queen Ketevan, along with her two grandsons, were taken hostage deep into Persia, and Georgia was brutally harrowed by the Persians. Ketevan spent ten years in captivity, which she spent in pious asceticism, but finally the Shah announced his intention to marry her after her conversion to Islam. She refused, and was publicly subjected to inhuman tortures, finally giving her soul to the Lord in 1624.

A group of French Augustinian missionary fathers, who had witnessed the inhuman tortures, wrapped Queen Ketevan’s body in linens scented with myrrh and incense and buried it in a Catholic monastery in Isfahan.

Teimuraz wept bitterly for his mother and sons and buried the relics with great honor in the Alaverdi Cathedral of St. George, where they remained until 1723 when they disappeared without a trace. Particles of her relics were also taken by the Augustinian monks to a Catholic monastery in Goa (a former Portuguese colony in India), as well as the Vatican and Belgium.

The Goa monastery was destroyed in the 19th century. Various scientific expeditions have sought since then to find the relics of Queen Ketevan in India.

In 2013, Archeology magazine spread information that remains discovered in the church ruins of Goa belonged to Queen Ketevan. According to the article, DNA analysis from the arm bone discovered in a stone sarcophagus showed that the bone was most probably not from India and is of Georgian origin.

After long negotiations, the Indian authorities have now agreed to release the relics to Georgia for six months.

Notably, the Georgian National agency for the preservation of cultural heritage earlier financed the restoration of wall painting in the Gras monastery in Lisbon depicting the martyrdom of Queen Ketevan. A Portuguese delegation also intends to attend the forthcoming conferences in Georgia, reports Sedmitza.ru. Greatmartyr Ketevan the Queen of Georgia

Greatmartyr Ketevan the Queen of Georgia
Commemorated on September 13
The holy Queen Ketevan was the daughter of Ashotan Mukhran-Batoni, a prominent ruler from the Bagrationi royal family. Georgian archbishop says, investigations prove that the relics of St. Maximus the Confessor are in Georgia

Georgian archbishop says, investigations prove that the relics of St. Maximus the Confessor are in Georgia
At the conference the results were announced of the investigations lasting several years that were dedicated to the authenticity of the saint’s relics uncovered in Georgia in 2010.

Relics of a great Georgian saint, elder Gabriel (Urgebadze), uncovered
On February 22, 2014, in the Georgian town of Mtskheta—the former capital of the early Georgian kingdom of Iberia—a significant event happened at the Samtavro Convent, which Orthodox Christians of Georgia and all over the world had waited with great reverence and love. The holy relics of the great elder and wonder-worker, Blessed Father Gabriel (Urgebadze), fool-for-Christ, were uncovered.
Comments

John8/18/2017 5:13 pm
T.: The invasions of Georgia by the Persians took place a long time ago, and Iran no longer threatens Georgia.

T.8/18/2017 5:10 pm
Utter hypocrasy for Russia to now support the Iranians (Persians). It will open a great propaganda avenue for the west to turn Georgia against the Federation.
×