St. Metrophanes (in schema Macarius) the Bishop of Voronezh

Commemorated on November 23 and August 7 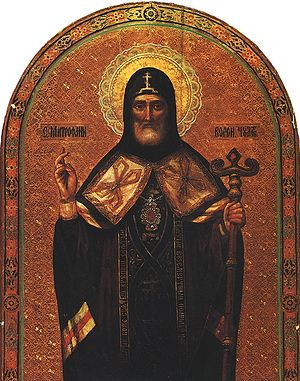 Saint Metrophanes, Bishop of Voronezh, in the world Michael, was born November 8, 1623. Since the saint’s book of commemorations begins with persons of priestly rank, it is assumed that he was born into a priestly family. We know from Saint Metrophanes’ will that he “was born of pious parents and was raised by them in the incorrupt piety of the Eastern Church, in the Orthodox Faith.”

Until he was forty, the saint lived in the world. He was married, had a son John, and served as a parish priest. The place of Father Michael’s pastoral activity was the village of Sidorovo, situated at the River Molokhta, a tributary of the Teza flowing to the Klyazma, not far from the city of Shui (now Vladimir district).

After his wife died, Father Michael received monastic tonsure with the name Metrophanes in the Zolotnikovskaya Dormition Monastery in 1663. In the Synodikon of the monastery the entry for Saint Metrophanes begins with the words: “Origin of the black clergy Metrophanes of Sidorovo.” After three years of monastic life the hieromonk Metrophanes was chosen igumen of the Saint Cosmas of Yakrom (February 18) monastery. He guided the monastery for ten years, showing himself zealous as its head. By his efforts a church was built here in honor of the Icon of the Savior Not-Made-by-Hands (August 16).

Patriarch Joachim (1674-1690), learning about the deep piety of Saint Metrophanes, raised him in 1675 to the rank of archimandrite of the Makariev-Unzha monastery. Under the supervision of the saint, a stone church was built there in honor of the Annunciation of the Most Holy Theotokos, together with a trapeza and bell-tower.

At the Moscow Council of 1681-1682 among the number of measures taken for the struggle against the old ritualist schism, and with the goal of improving Christian enlightenment among the Orthodox populace, it was resolved to increase the number of dioceses, and to open up new cathedrals at Voronezh, Tambov, Kholmogor and Great Ustiug. Saint Metrophanes was summoned to the capital and on April 2, 1682 was consecrated Bishop of Voronezh by Patriarch Joachim and sixteen archpastors.

The beginning of Saint Metrophanes’ tenure as bishop coincided with a dispute over the imperial succession, and a Church schism. Upon his arrival at Voronezh the saint first of all sent an encyclical to the pastors of his diocese, in which he urged his pastors to moral improvement. “Venerable priests of God Most High,” he wrote, “leaders of the flock of Christ! You ought to possess clear eyes of the mind, illumined by the light of reason, in order to lead others on the correct path. In the words of the Lord, you must be the light yourselves: ‘you are the light of the world’ (Mt. 5:14). When Christ the Savior entrusted His flock to the Apostle Peter, He said to him three times: ‘feed my sheep.’ This is because pastors care for their flock in three ways: by the words of teaching, by prayer and the power of the Holy Mysteries, and by their way of life. You must also act by all three methods: teach the people, set an example of a righteous life, and pray for them. Strengthen them by the Holy Mysteries; above all enlighten the unbelievers by holy Baptism, and try to lead sinners to repentance. Take care of the sick, so that they do not depart from this life without receiving Holy Communion and Holy Unction.”

Saint Metrophanes began his archpastoral activity with the building of a new cathedral church in honor of the Annunciation of the Most Holy Theotokos, replacing an old wooden temple. In 1692 the cathedral with chapels in honor of Saint Michael and Saint Nicholas was consecrated. In the twenty years that Saint Metrophanes was bishop, the number of churches increased from 182 to 239, and two monasteries were founded: the Korotoyaksk Ascension and the Bitiugsk Trinity monasteries. And in the existing monasteries, he concerned himself with eradicating the unseemly behavior and disorder, emphasizing a strict life according to the monastic rule.

The first Bishop of Voronezh eagerly concerned himself with the needs of his flock. He consoled both the poor and the wealthy, was a defender of widows and orphans, and an advocate of the wronged. His home served as a hostel for strangers and a hospice for the sick. The saint prayed not only for the living, but also for dead Christians, and particularly for soldiers fallen for the Fatherland, inscribing their names in the cathedral’s memorial list. Remembering them at Proskomedia [priest’s preparation of the gifts before Liturgy], Saint Metrophanes said: “If this is a righteous soul, then there is a greater portion of worthiness. If he is a sinner, however, then there is a connection with God’s mercy.”

There was a great friendship between Saint Metrophanes and Saint Pitirim, Bishop of Tambov (July 28). They not only kept up a correspondence, but also met for spiritual talks. The founding of the Tregulyaev monastery of Saint John the Forerunner was connected with the friendship of the bishops. On September 15, 1688 Saint Metrophanes visited Saint Pitirim. Three of them (the priest Basil was with them) took a stroll together to the Tambov archpastor’s place of solitary prayer, and there they chose the place for the future monastery. 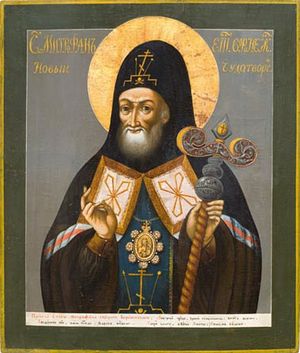 Saint Metrophanes, an intensely patriotic man, by his own moral authority, kind-heartedness and prayers, contributed to the reforms of Peter I, the necessity and purpose of which he well understood. With the building of a fleet at Voronezh for a campaign against Azov, Saint Metrophanes urged the nation to fully support Peter I. This was particularly important, since many regarded the construction of a fleet as useless. The saint did not limit himself only to advice to the Tsar, but rendered also material support to the state treasury, which needed money for the construction of the fleet, and he provided all the means, aware that they would go for the benefit of the nation.

The saint’s patriotic feelings were combined in his soul with unflinching faith and strict Orthodox conviction, on account of which he did not fear incurring the Tsar’s wrath. The saint refused to go to court to see Peter I, since there were statues of pagan gods there, and although disgrace threatened the saint for disobeying the imperial will, he remained uncompromising. Peter gave orders to remove the statues and from that time was filled with greater respect for the bishop.

Saint Metrophanes died in 1703 in extreme old age, taking the schema with the name Macarius before his death. The funeral took place on December 4, conducted according to the saint’s monastic, not priestly rank. This became the established practice for the burial of a bishop. Tsar Peter I himself carried the coffin from the cathedral to the tomb. Taking leave, he said: “I no longer have a holy Elder such as he. Memory eternal to him.”

One of the remarkable memorials of the life and activity of Saint Metrophanes is his Spiritual Testament. In it he says: “By divine destiny I have arrived at old age and now I have exhausted my natural strength. Therefore I declare this my final writing ... When my sinful soul is released from its union with the flesh, I entrust it to God Who created it, that it might find favor as the work of His hands. My sinful bones I grant to the mother of all (the earth), in expectation of the resurrection of the dead.” Further on, addressing pastors and the flocks, the saint says: “The simple sinner gives answer to God for his soul alone, but priests can come to torment for many, in neglecting the sheep, from which they gather milk and wool... For everyone the rule of wise men is: do work, preserve a balance, and you will be rich. Drink temperately, eat little, and you will be healthy. Do good, shun evil, and you will be saved.”

The commemoration of Saint Metrophanes was established in 1832. On August 7, we celebrate the translation of his holy relics. Glorification of St Innocent the Metropolitan of Moscow and Enlightener of the Aleuts, Apostle to the Americas
Commemorated on October 6
The missionary service of the future Apostle of America and Siberia began with the year 1823. Father John spent 45 years laboring for the enlightenment of the peoples of Kamchatka, the Aleutian Islands, North America, Yakutsk, the Khabarov frontier, performing his apostolic exploit in severe conditions and at great risks to life.