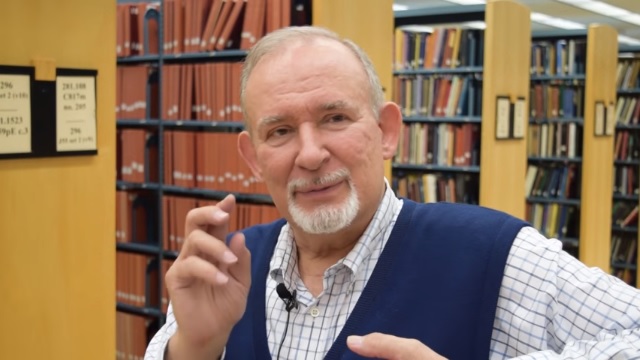 Lawrence Mykytiuk cannot document that everything in the Bible took place. What the Purdue University Libraries professor can do is show you that many of the people written about did, in fact, exist.

“While some would put their hand on the Bible and really mean it when they take an oath, a few revisionist academics would throw it out and say, ‘That’s creative writing.’ I was looking for concrete, objective evidence outside of the Bible that would help build the case,” said Mykytiuk, an associate professor of library science.

Mykytiuk (pronounced MICK-ee-took) has added three names to the previously published 50 Old Testament individuals in the Bible, beginning with King David, all of whom he says he has verified through his research. The three new people are Tattenai (also translated as Tatnai), a Persian governor during the time of Ezra (after the Babylonian exile); and two high officials of Babylonian King Nebuchadnezzar II: Nergal-sharezer, called the “samgar” official, and Nebuzaradan, “the chief of the guards.” A YouTube video is available here.

Tattenai is mentioned in the fifth chapter of the book of Ezra. He also is mentioned outside of the Bible in a letter on a clay tablet from Persian King Darius I the Great, in the year 502 B.C.

...Read the rest at Purdue University. The cause of destruction of the antediluvian civilization
Andrei Solodkov

The cause of destruction of the antediluvian civilization
Talks on the book of Genesis 6
Andrei Solodkov
In another conversation on the book of Genesis, Andrei Ivanovich Solodkov speaks about why it repented the Lord that He had made man on the earth (Gen. 6:6), what was foreshadowed by the ark made by Noah, how the holy fathers interpret its arrangement, what was Noah’s first act after the flood and what it teaches us. Archaeology Breakthrough: 1,700-Y-O Hebrew Scroll Discovered to Be Bible's Leviticus
An ancient, nearly 1,700-year-old Hebrew scroll has finally been deciphered by using complex digital analysis, revealing that it contains verses from the book of Leviticus in the Bible, scientists announced in a major archaeological breakthrough.
Comments
×