Thou Good and Faithful Servant

Commentary on the Gospel Reading for the Sixteenth Sunday of Pentecost 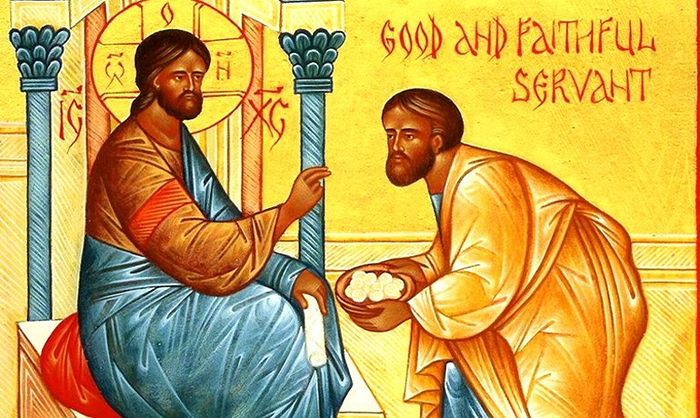 The Lord has given us talents and entrusted us with labor. He does not want us to be idle. Everything that we have, we have received from Him. We have nothing of our own belonging to us, except for sin.

In today’s Gospel it says that Christ behaves with us as a man who, going into a far country, has called his servants and entrusted them with his property. When Christ ascended into Heaven, He was like this man. Setting off on this path, He took care to provide His Church with everything necessary in the time of His absence. Christ entrusted it with everything that He has, and to one He gave five talents, to another two, and to another one—each according to his strength.

People have various talents and various obediences in the Church, and all the gifts of Christ are incalculably precious—they were purchased by His Blood. One talent is enough to live on this wealth your whole life and for all eternity; but this talent must not be buried in the ground. By diligence and labor—the Lord tells us today—we can achieve much in the spiritual life. The more gifts a person has, the more he must labor. From those who have received two talents, the Lord expects the use of two. If they labor on the strength of what they have been given, they will be received into the Heavenly Kingdom, although they did not do as much as others.

He who had only one talent turned out to be an unfaithful servant. There are undoubtedly many people who, having two or five talents, bury them in the ground. They have great talents and great opportunities. And if he who had one talent will be so punished, how much greater a punishment will be given to those who had much but did not use it! However, it has long been observed that those who have the least talents in service to God do even less than they should.

Some justify themselves, saying they have no chance to do what they would like to do. However, they do not want to do what they undoubtedly could have done, and so they sit and do nothing. Indeed, their situation is sad, because, having just one talent which they should have taken great care of, they neglect it.

“Here is what is yours,” says the servant, returning his talent to the Lord. “Although I did not multiply it, as did the others, still, I didn’t reduce it”—as if he wasn’t required to work. He admits that he buried his talent in the ground. He portrays it as if he is not to blame for this, but conversely, as if he deserves praise for his caution, for having avoided all risk. This man has the psychology of a cheap servant. “I was scared,” he says, “and so I didn’t do anything.” It’s not that fear of God which is the beginning of wisdom and which cheers the heart and inspires us to labors for the glory of God. It’s a despondent fear, which paralyzes the mind and will.

False concepts about God lead to an impious attitude towards Him. Whoever thinks it’s impossible to please God and therefore has no reason to serve Him, will do nothing in his spiritual life. Everything that he says about God is a lie. I knew thee, he said, that thou art an hard man, reaping where thou hast not sown, and gathering where thou hast not strawed, while the whole earth is filled with His mercy. Not that He reaps where He did not sow—He often sows where nothing is reaped. For He is the sun shining and the rain raining on the ungrateful and the wicked who in response say to Him as the Gadarenes: “Depart from us.” Wicked people usually thus place the blame for their sins and miseries on God, rejecting His grace.

The Lord calls him a wicked and slothful servant. Lazy servants are wicked servants. Not only those who did evil will be condemned, but those who do not do good. Apostle James says to him that knoweth to do good, and doeth it not, to him it is sin (Jas. 4:17). Those who relate to God’s work with negligence become close to those who do the work of the enemy.

The devil’s strategy and tactic towards mankind is to first create a void that could then be filled with blackness. As so much was just external piety in the Church, with the psychology of a servant having one talent, God allowed the invasion of our Fatherland by the atheistic ideology with all of its horrors. And when people had enough of communism and the void emerged again, something happened to which we are witnesses today: In place of atheism, Satanism is coming with the approval of sin as the norm. Look at what is happening with our youth! Idleness opens the path to wickedness. When a house is empty, an impure spirit with seven evil spirits fills it. The enemy comes and sows tares while a man is sleeping.

The slothful servant is sentenced by Divine judgment to the loss of his talent. Take therefore the talent from him, the Lord says, and give it unto him which hath ten talents. For unto every one that hath shall be given, and he shall have abundance: but from him that hath not shall be taken away even that which he hath.

In his famous conversation with Nicholas Alexandrovich Motovilov, during which his face shone like the sun, St. Seraphim of Sarov likens human life to a spiritual purpose. A talent is a weight of silver, it is money, which is just paper with something drawn on it. Or even if it is real silver or gold, it’s just a pile of shiny money, and it doesn’t mean anything. It lies as dead weight until its released into the trade-economic turnover. The same thing happens with spiritual gifts. He who has not—that is, who has it all, as if not having, does not use it for the purpose intended by God—even what he has will be taken from him. This can apply to a man’s entire life when he lives as if he is not alive, as if his life does not belong to him. But those who diligently use the opportunity they have will be even more blessed by God. The more we do, the more we can do in the spiritual life. But whoever is not encouraged by the gift he has received loses it. He fades away, as if nothing is supporting the fire.

No one is bereft of talent, at least one. The holy fathers say that one talent is life; and even not having any kind of special talent, we can give it to others: “Why did you not give your talent to others?” the Lord asks. “Then you would have received no less than he who has the most talents.”

In the end, God alone knows who has been given how many talents. Imagine a man who is smarter than everyone on earth and more brilliant than everyone in every sphere, and his life boils with the brightest activity. But in fact, he does nothing other than bury his talent in the ground if he dedicates himself to purely earthly goals. The Lord witnesses that the widow in the Gospel, who put less in the Temple treasury than everyone else, put in more than all because in her last two mites she offered her entire life to the Lord. Many who are last will become first. Everything is determined not by our luck, but by our faithfulness, our sincerity, and our giving of ourselves. What do the greatest external talents mean in comparison with the internal—with humility, with meekness, with purity, and, finally, with grace, which immediately changes everything?

Lord! the man says, with the joy of gratitude to God and with hope in Him—thou deliveredst unto me five talents: behold, I have gained beside them five talents more. Truly, the more we give to God, the greater debt we have in relation to Him for what He has given us, the more we are filled with gratitude to Him.

The day of the Lord is coming soon, and we will approach Him one by one, as is described in the vision of Nun Lybov about the New Martyr and Grand Duchess Elizabeth and Fr. Mitrophan of Srebransk. Those who are marked with the light of the face of the Lord will forever live according to His words: Well done, good and faithful servant; thou hast been faithful over a few things, I will make thee ruler over many things: enter thou into the joy of thy Lord.

The work which we do for God in the world is small, very small compared to the joy prepared for us. Truly, Eye hath not seen, nor ear heard, neither have entered into the heart of man, the things which God hath prepared for them that love him (1 Cor. 2:9). This joy is the joy of the Lord, which He has purchased for us at the price of great works and great sorrows. Whatever talents we may have, this joy will belong to us in full if we love the Lord.

“Time passes quickly, as a river flows,” says St. Nikolai Velimirovic, “and soon, I repeat,” he says, “soon will come the end of all things.” No one can return back from eternity, to take what he forgot here on Earth, and do what he did not do. Therefore, let us make haste to use the gifts we have received from God for acquiring eternal life. The Lord of the Vineyard
Archpriest Alexander Shargunov

The Lord of the Vineyard
Commentary on the Gospel Reading for the Thirteenth Sunday of Pentecost
Archpriest Alexander Shargunov
It is clearly seen in the parable that Christ knows what awaits Him ahead and what path His Church must walk. He consciously ascends to His death, to give Himself for the salvation of all, to become the cornerstone upon which life is built and without which all of mankind would bear witness to the destruction of all. Rejection and death await the Lord and His Church, but it is all in order to bring mercy, judgment, and victory for those who love Him. Homily for Rich Man and Lazarus
Seminarian Sermon at St. Tikhon’s Seminary
Joseph Magnus Frangipani
So Christ presents us today with two men, one rich with worldly thoughts and another the testament to the hesychastic, ascetic life. We can choose which of these men we want to be. A Poor Man Named Lazarus
Fr. Lawrence Farley
Our Lord’s parable of Lazarus and the rich man is unique among the parables, for in this parable alone one of the characters has a name.
Comments
×