The Fresco and Iveron Icon of Great Martyr Ketevan 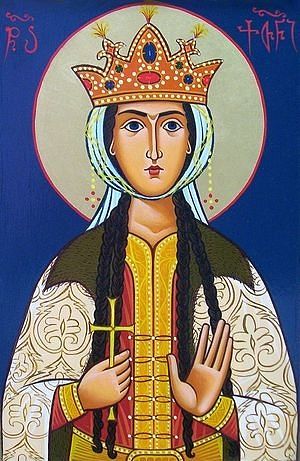 They were all voluntary hostages for the sake of their country’s salvation; each was given the choice to either accept Islam and remain alive, or to receive a martyr’s crown and the grateful memory of their descendants.

It is hard to read about Great Martyr Ketevan’s tortures without shuddering. By her steadfastness and courage she inspired her spiritual father and servants to become confessors.

“Latin monks were present at her martyrdom,” writes the hagiographer Mikhail Sabinin. “They brought the shah 120 thousand rubles asking for the body of the martyr, but the shah did not even want to hear about it. After a long search they found her grave… They secretly commissioned a coffin and placed her honorable body in it. 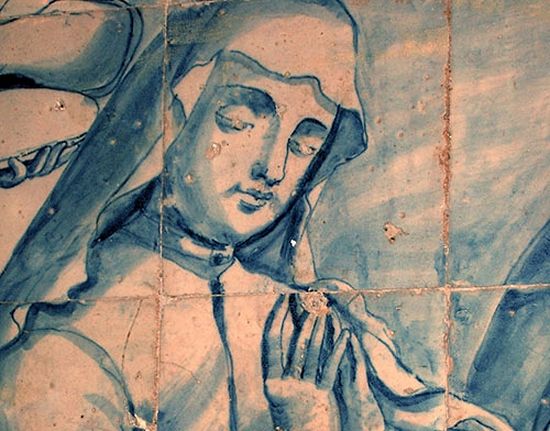 “In order to obtain the good graces of the king, the Latin monks of the Augustinian Order separated the head and right hand from the holy relics and sent them to King Teimuraz…

“The remaining relics were sent to Rome and placed in the sepulcher of the apostle Peter.”

The fresco in Lisbon 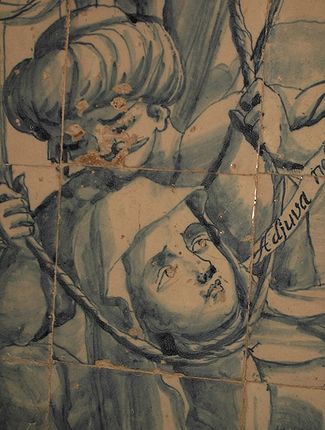 Photo: pravoslavie.ru
In Lisbon, in the cathedral of De Gracia, there is a nine-meters-long fresco depicting the scene of Queen Ketevan’s martyrdom. This mosaic was created according to the narrative of the Portuguese missionary Fr. Ambrosio Dus Angua, who witnessed the Queen’s final moments. The mosaic is in blue. At the top is the inscription, “The worthy Queen Gativanda. Tortured to death in Persia in the city of Shiraz on September 22, 1624.” Fragments depict the arrival of Ketevan in Shiraz, scenes of her martyrdom, and the presentation of her relics to her son, Teimuraz I by Fr. Ambrosio.

The Iveron icon before which Great Martyr Ketevan prayed has been brought to Georgia.

After the Queen’s death, this icon was taken by Shah Abbas. At that time unprecedented famine and earthquakes were striking Persia. The citizens began to beg the Shah to get rid of the icon. “That icon from Gurdzhistan has brought us misfortune. Let’s tie it to a donkey and let it go where it wants.”

That is what they did. The icon returned to Georgia. But during another invasion by the Persians it was stolen again, along with other holy shrines from Svetitskhoveli.

Shah Abbas immediately recognized the same icon that had brought misfortune to his country. He was frightened and sold it to a Russian merchant. The merchant took the icon to Novgorod and gifted it to the prince. The prince in turn donated the icon to a monastery on the Dvina River, where many miracles took place from it. The Russian monks made a rich silver icon cover for it.

In the second half of the seventeenth century, during an outbreak of the plague in Moscow, the icon was brought to the monastery of Metropolitan Alexy. Again many miracles took place from the icon. Then it disappeared.

All of this is described in the “Lives of the Saints” for September 4 by St. Dimitry of Rostov.

Three centuries later the icon desired to return to Georgia. Here is how it happened.

Fr. George (Ramadze), rector of the Church of Great Martyr Ketevan, relates, “We searched for this icon in all the museums of Europe. At that time, one of my parishioners came to me for a blessing before leaving to work in France. I blessed her. After some time she contacted me and informed me that in Montpelier, in the family where she works are Georgian icons and I could discuss the possibility of acquiring them from their owners.

“How amazed we were when among several icons we discovered that very icon of the Mother of God. All the characteristics matched. But the owners categorically refused to sell it. We begged them for a long time and offered to exchange the holy icon for a painting by Lado Gudiashvili. Somehow the French owners agreed, and they told us how the icon had come into their family. After the fall of the monarchy in Russia, the icon ended up in Ireland, in the royal family. Then it was given as a reward to a housemaid whose niece was our Frenchwoman, from whom we purchased the holy object.

“It is also amazing how the icon travelled back to its homeland. We had to pass through several customs points. Even the slightest amount of metal in our baggage set off the alarms in the metal detectors. Only the suitcase containing the icon did not set them off.

“As soon as the airplane landed in Georgia, tears rolled from the eye of the icon. Traces of them can still be seen. Who knows, perhaps when all the parts of Queen Ketevan’s relics return to their motherland, the tears will disappear.”

(This was prepared from an article by Eki Lomidze in the Georgian newspaper, Kviris Palitra, October 10, 2005). Relics of martyred Queen Ketevan arrive in Georgia
“How can there be unbelievers in a nation with so many saints, so many martyrs—hundreds of thousands of martyrs—King Tamar, St. Nino, St. Ketevan. And we thank the Lord that He gives us strength and grace. The whole of the Georgian people seem to have been united with Heaven today… Our beloved queen has returned to us, Her Majesty Queen Ketevan.” Greatmartyr Ketevan the Queen of Georgia

Greatmartyr Ketevan the Queen of Georgia
Commemorated on September 13
The holy Queen Ketevan was the daughter of Ashotan Mukhran-Batoni, a prominent ruler from the Bagrationi royal family.

Holy Great-martyr Queen Ketevan (†1624)
September 13/26
Archpriest Zakaria Machitadze
Holy Queen Ketevan was the daughter of Ashotan Mukhran-Batoni, a prominent ruler from the Bagrationi royal family. The clever and pious Ketevan was married to Prince Davit, heir to the throne of Kakheti. Davit’s father, King Alexandre II (1574–1605), had two other sons, Giorgi and Constantine, but according to the law the throne belonged to Davit. Constantine was converted to Islam and raised in the court of the Persian shah Abbas I.
Comments
×