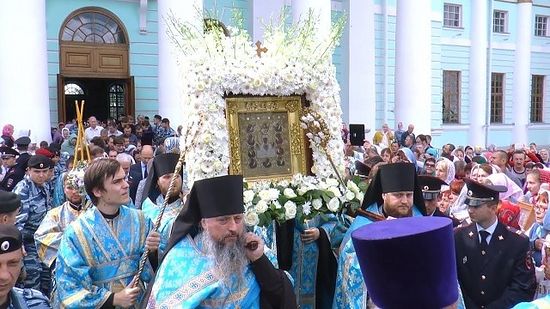 An ancient tradition was continued yesterday, with a cross procession setting out in the morning following the Divine Liturgy in the Kursk Hermitage, headed for the city of Kursk. The ancient and miraculous Kursk Root Icon, brought from America by a delegation of the Russian Orthodox Church Outside of Russia (ROCOR), was carried in the solemn procession that gathered thousands, reports Kurskaya Pravda.​

Today’s procession was the ninth in a row to take place in the ancient city of Kursk, attracting pilgrims from near and far. This year’s ROCOR delegation is headed by Bishop Nicholas of Manhattan and Archbishop Mark of Berlin. They arrived to the monastery from Moscow by helicopter on Friday, returning the icon to its ancient homeland where it was discovered in 1259. More than 20,000 pilgrims have already venerated the icon.

The wonderworking icon was joyously met by Kursk natives and guests at the Church of Entrance of the Mother of God, and the procession was joined by Kursk governor Alexander Mikhailov and other regional and city officials at Perekalsky Square. The large stream of people continued along the main street of the city, which the locals lovingly adorned with living flowers.

The miraculous icon arrived at the Znamensky Cathedral to the sound of ringing bells and beautiful chanting. Metropolitan Herman of Kursk and Rylsk and Bishop Nicholas of Manhattan then served a moleben before the image of the Mother of God in the cathedral.

The protectress of the Kursk lands will remain in the cathedral until October 2, after which it will be returned to New York with the ROCOR delegation. The miraculous icon will be taken to Kursk medical institutions as a blessing for patients on September 29.

The Kursk Root Icon was taken from Russia to Serbia, then to Germany, and was finally transferred to America by clergy of the Russian Orthodox Church Outside of Russia, where it had its permanent residence first in the New Kursk Hermitage in Mahopac, N.Y., and then in the Synod's Cathedral Church of the Mother of God of the Sign in New York City, the residence of the First Hierarch of the Russian Orthodox Church Abroad. The Wonderworking Kursk Icon of the Mother of God "Of the Sign"
Commemorated November 27/December 10
The frightened monastic brethren rushed immediately to the cathedral, where they beheld a scene of horrible devastation. The force of the blast had shattered the gilded canopy above the icon. The heavy marble base, constructed of several massive steps, had been jolted out of position and split into several pieces. A huge metal candlestick which stood before the icon and been blown to the opposite side of the cathedral. A door of cast iron located near the icon had been torn from its hinges and cast outside, where it smashed against a wall and caused a deep crack. All the windows in the cathedral and even those in the dome above were shattered. Amid the general devastation, the holy icon remained intact and even the glass within the frame remained whole. Thinking to destroy the icon, the anarchists had, on the contrary, become the cause of its greater glorification.
Comments
×