Icon with relics of St. Mardarije gifted to Mt. Athos from America 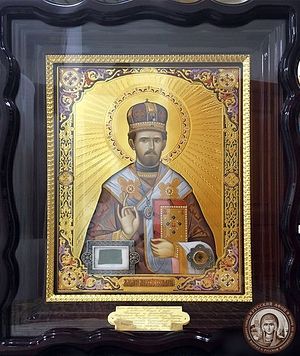 Photo: afonit.info
A pilgrimage group from St. John the Baptist Cathedral in Brooklyn, headed by the rector and dean of the New York district of the ROCOR Eastern American Diocese Archpriest Alexander Belya, gifted an icon of the recently-glorified Serbian saint of the American lands the Holy Hierarch Mardarije of Libertyville to St. Panteleimon’s Monastery on Mt. Athos on September 17. The icon also has a small piece of his relics, as well as a piece of his priestly cuffs, reports Russian Athos.

Following the service in the monastery cathedral, Fr. Alexander addressed the abbot and brethren and pilgrims with a sermon in which he spoke of the heroism of the ministry of St. Mardarije on American soil. 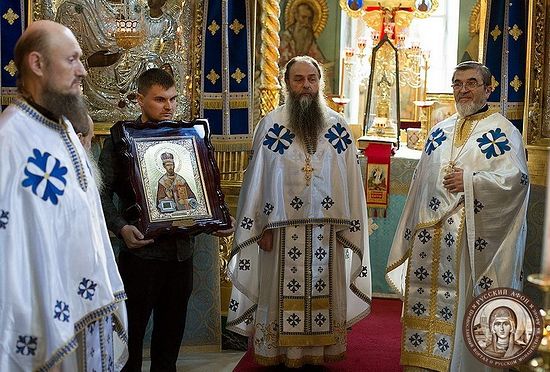 Handing the abbot Archimandrite Evlogy the icon of the new saint, Fr. Alexander stated, “There is also a piece of his relics here and a piece of the cuffs from his vestments that his honorable relics were unearthed in. These sacred objects will remind you of great this saint was, who honored Mt. Athos during his lifetime and maintained a correspondence with your brethren. Therefore, it is also an especially great connection, a connection of the Orthodox of all jurisdictions with the Holy Mountain. In this, Athos stood, and stands, at the top, and we all look upon your special prayers with joy, faith, and hope.”

Fr. Alexander also noted that the icon was painted by monks of the great Kiev Caves Lavra in Ukraine.

The pilgrims also visited a number of other Athonite monasteries, including Pantocrator, Iveron, Koutloumousiou, Stravronikita, and Dionysiou. The group also had the blessing of venerating the Axion Estin Icon of the Theotokos in Karyes, the capital of the Holy Mountain.