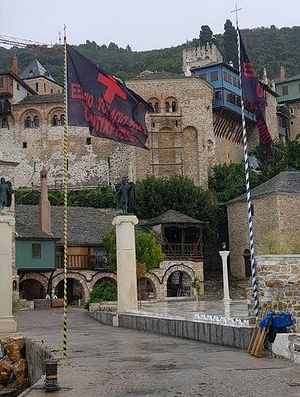 Photo: agioritikesmnimes.blogspot.ru
Black flags with the inscription “Keep the Antichrists off the Holy Mountain” have been posted in the Athonite monastery of Dochariou as a protest against the visit of the Prime Minister of Greece Alexis Tsipras, reports Agion Oros.

Together with Ecumenical Patriarch His All-Holiness Bartholomew, the politician was to attend the solemn consecration of the new living quarters for the brethren of Pantokrator Monastery today. The Greek government earlier announced that the visit was postponed due to the prime minister’s busy schedule, but the true reason, Agion Oros reports, was the protest of several Athonite monasteries against his visit. Representatives of the majority of Athonite monasteries spoke against Tsipras’ visit at a meeting at the administrative center of Athos.

Commenting on the decision, Dochariou abbot Archimandrite Gregory (Zumis) emphasized, “A fight was given, and the futility of the authorities was manifested. The Cross was victorious, the Theotokos, the protectress of Athos was victorious, the prayers of the monks were victorious. The main satrap of the recent years has not set foot on the Holy Mountain.”

Archimandrite Gregory also expressed bewilderment at the initiative of several monasteries to invite Tsipras to the mountain: “My heart is overwhelmed with sadness that the wealthiest monasteries have become traitors for the sake of gaining the favor of the authorities.”

The abbot has been very outspoken about the state of Orthodoxy and the government in Greece. “Down with any moral values, down with religious and patriotic symbols, down with the Gospel truth. Down with heroes and national holidays. All information is given to children in a corrupted form. Long live lies and terror!...” Abbot Gregory earlier wrote, summarizing the rulers’ aims, noting how Greeks have become embarrassed to be Christians.

The representative of Xeropotamou Monastery to the Sacred Community of Mt. Athos Hieromonk Paul called unacceptable the visitation of the prime minister who is “highly favorable to the de-Christianization of the country,” and the “deformation of the national identity of the Greeks.”

Prime Minister Tsipras has been much criticized by the hierarchs and faithful of the Church in Greece, ever since his time in office began with him breaking tradition and refusing to take the religious oath on the Bible.

The outspoken Metropolitan Ambrose of Kalavyrta published an open letter to the prime minister in January, in which he wrote that he was disappointed to find that Tsipras had “set himself the goal of destroying the Greek Orthodox Church,” and accused the government of deliberately leading Greece to catastrophe through destroying its economy, cultural heritage, history, traditions, and Orthodox faith.

The metropolitan also wrote of the avowed atheist Tsipras’ hypocritical presence at Orthodox Divine services, during which he behaves shamefully, showing his indifference and laughing. “Perhaps it is worth it to recall the example of St. Ambrose of Milan’s not allowing Emperor Theodosius the Great into the church?” he asked, placing partial responsibility at the feet of the Church hierarchy who allowed a declared atheist to attend the Divine Liturgy. The Prophetic Role of Mount Athos in the Contemporary World
Jean-Claude Larchet
Mount Athos has long been a fascinating place, which attracts the attention not only of Orthodox, but people belonging to other religions and even of non-believers.
Comments

May the Lord open the earth under their feet if they dare to defile together the garden of the Theotokos!

Anthony9/28/2017 7:20 pm
Note that antichrists is plural. Not only referring to Tsipras. Funny how we've seen so much of Tsipraki and Bart together on the tele acting like bezzie mates ever since Bart's arrival in the hellenic motherland. Quite amusing and speaks volumes. Especially if people are judged by the company they keep.
×