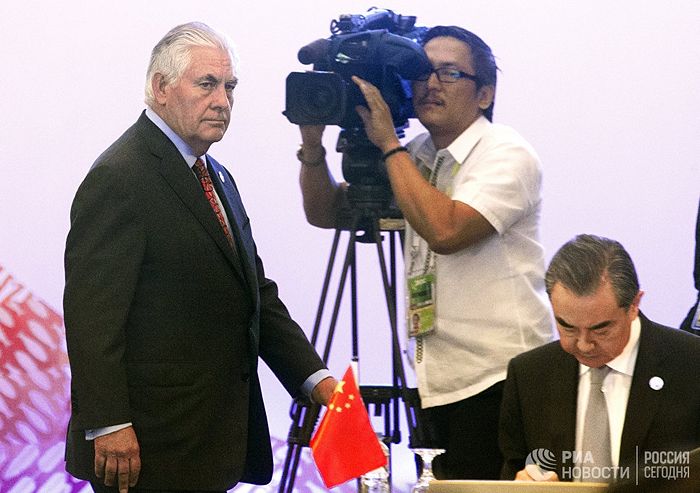 The Moscow Patriarchate has sent a letter to the U.S. Secretary of State Rex Tillerson in connection with the U.S. Department of State’s report on the supposed infringement of religious freedoms in Russia, Deputy Chairman Archimandrite Philaret (Bulekov) of the Department for External Church Relations (DECR) reported to RIA-Novosti today.

“The letter was sent to the U.S. embassy to be given to the addressee,” Archimandrite Philaret said, adding that it is not an “open letter.”

According to Fr. Philaret, after the Secretary of State receives the DECR’s letter, there will be a report on the department’s site “on the basic positions of the Russian Church in connection with the report, as presented in the letter.”

The head of the DECR’s division for interreligious activities Fr. Dimitry Saphonov previously stated at a press conference that the Church was preparing a letter to Tillerson in connection with the Dept. of State’s “biased report” on religious freedoms in Russia, and Washington’s complete disregard for the ongoing persecution of the Moscow Patriarchate in Ukraine.

In particular, as the DECR notes, the report include “no mention of the numerous cases arson of churches, the beating of priests, and the legislation being prepared for reception in Ukraine today, which are completely discriminatory to all religious associations that do not have their centers in Ukraine.” Trump signs religious freedom order that leaves many unsatisfied
The executive order comes largely as a response to the Christian bakers, photographers, florists, and many others who were persecuted under Obama rule for maintaining their Christian beliefs regarding marriage and sexuality. Montenegro Accused of Threatening Religious Freedom
A network of European religious liberties groups has criticised Montenegro’s draft law on religious freedom, alleging that it would violate the rights it says it intends to protect. F.10/2/2017 11:52 pm
And these self-rightious hypocrites have the gall to overlook the murders commited by radical islam and Neo-fascists and harrass Russia over nothing! Has Russia bombed any dissidents lately? Beheaded anyone? Attacked anyone with acid? Murdered heterodox officilas? Cowardly murdered a foreign embassador in cold blood with his back turned?!! What makes them deceive themselves so? Saudi Arabia and "Kosovo" are good but Russia is bad? We are coming to the time spoken of in the scriptures that good will be called evil and evil will be called good.

Anthony9/29/2017 8:52 pm
Why are the Russkies wasting their time with westerners? They're trying to initiate dialogue with antichrists who have been responsible for the destruction of our Christian brethren in the Middle East. It is only thanks to Russkie intervention that Christians have not been completely annihilated by westerners and their proxy terrorists. Of course not much changes with those tribes. Back in 1936, Hitler let off ''doves for peace'' at the Olympics, and guess what happened three years later. Always the same hypocrisy and lies from the same godless ones whether it be germany, britain or america.
×