The Mother of God and Our Salvation

On the Feast of the Protection of the Most-Holy Theotokos 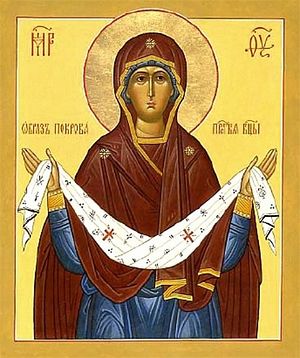 “Today the Virgin standeth forth in the Church, and with the choirs of the Saints she invisibly prayeth to God for us. Angels and hierarchs offer homage, and the apostles and prophets join chorus; for our sake, the Theotokos entreateth the pre-eternal God.” That is how the Church proclaims the marvelous apparition of the Mother of God that took place in the mid-10th Century, in Constantinople’s Blachernae church, the church to which her head-covering – her omophorion – and part of her cincture had been brought from Palestine in the 5th Century. On Sunday October 1 (October 14 on the new calendar), at the fourth hour of the night, when during the All-night Vigil the faithful filled the church to overflowing, St. Andrew, Fool for Christ (commemorated on October 2), lifted his gaze to the heavens and saw our Most-holy Sovereign Lady Theotokos, illuminated by heavenly radiance and surrounded by Angels and a host of Saints, moving through the air. St. John the Baptist and the Holy Apostle St. John the Theologian accompanied the Queen of Heaven. The Most-holy Virgin knelt, and for a long time remained in tearful prayer on behalf of Christians. Then she approached the Altar Table, and continued to pray. At the conclusion of her prayer, she removed her head covering and raised it over the people praying in the church, in token of protection from enemies visible and invisible. The Most-holy Lady shone with a heavenly light, and the omophorion was brighter “than the rays of the sun.” With trepidation, St. Andrew contemplated the marvelous vision, and asked blessed Epiphanios, his disciple standing nearby: “Brother, do you see the Queen and Sovereign Lady, praying for the entire world?” Epiphanios replied, “I see, holy father, and am terrified.” The Most-blessed Theotokos was asking the Lord Jesus Christ to accept the prayers of all who called upon His Most-holy Name and who rushed to her for intercession. Along with the Angels with her in the air, the Mostimmaculate Queen prayed, “O Heavenly King, accept everyone praying to Thee and calling upon my name for help, that they not depart from my sight wasted and unheard.” St. Andrew and Epiphanios, who had been made worthy to see the praying Mother of God, “…for a long time gazed upon the covering stretched out over the people and upon the glory of the Lord shining forth like unto lightning. As long as the Most-holy Theotokos was there, the covering was also visible. Once she departed, it too became invisible. However, although she took the omophorion away, she left behind its accompanying grace.”

. . .That is what Church Tradition passes down to us regarding the Protection of the Most-holy Theotokos, which we celebrate on October 14. What for us is the PROTECTION of the Theotokos, the symbolic appearance of which was revealed to St. Andrew, Fool for Christ, in Constantinople’s Blachernae church?

In order for the immemorial idea of Theosis (deification, attainment of likeness to or union with God) to be accomplished, God, when creating man, instilled in him His Image and His Likeness. Thereafter, God’s revelation to the world has been in human form: It became possible to talk about God, that is to say about His love, His beauty, His truth, His freedom, by looking upon man. Therefore, biblical concepts and words pertaining to man and attributed to God are not, as some propose, simply naïve allegories, but rather comprise a great truth — the truth of the community of God with man: Godliness in man, and humanity in God!

The problem is that the first-created man (Adam) fell, and with him and through him, all God’s Creation departed from God. In order to return man to the likeness of God, the Son of God, the New Adam, eternal Christ, was sent into the temporal world. Taking upon Himself fallen human nature, He transfigured it and raised it up into the Heavens to God the Father. Thus, for the world lying in evil, Incarnate Christ is “Savior,” but salvation would not have been needed had the first Adam not sinned; then the God-Man/God-Incarnate Christ would not be “Savior,” but would simply be “God-Man/God-Incarnate.”

Christ received his human nature from the Ever-virgin Mary. Through her, fallen humanity consented to its restoration, by saying to the Archangel Gabriel, “Behold the handmaid of the Lord; be it unto me according to thy word.” Through the Theotokos, something beyond comprehension, the union of what cannot be joined together – the Creator and His creation – is accomplished. What a wealth of treasure and wisdom and love God has for man! The Creator unites with His creation, and in that union, His creation does not burn to ash in the fire of Divinity. That is the meaning of the Protection of the Mother of God. Because of that protection, the Church attributes to the Mother of God the most beautiful, precious names! What a plethora of terms and poetic comparisons are used to honor the Theotokos and Ever-virgin Mary! Here are some of the liturgical terms that the Church uses to describe the Unwedded Bride, the Virgin Mary: The Mother of God is the Queen of Heaven and the central point of beauty of the earth; she is the flower of the earth, and a hyacinth, azure vase; she is a sweet-sounding lyre, she is a most-holy ark and a sunbright ray; she is incense and the Spring of grace; she is precious myrrh and a gold/porphyry robe; she is all-holy, and robed in the sun; she is the pearl of the kingdom; she is joy, praise, chanting and glory… She is the power of Divine infiniteness . . ..

Glory to God, Who hath shown us the light, and Who hath given us such an Intercessor! Homily on the Day of the Protection of the Mother of God
Hieromartyr Thaddeus (Uspensky)
Even if only St. Andrew and Epiphanius saw the Protection of the Mother of God, don’t we know that her Divine Protection invisibly spreads across the whole world? Could it be that the one who from the very first days when her Divine Son began His preaching to the world asked Him about the wine running out at the marriage in Canaan of Galilee, would after departing to heaven cease to ask and pray for the human race? Feast of the Protection of the Mother of God
Metropolitan Philaret (Voznesensky)
When I have occasion to speak about how the All-Pure Virgin covered the worshippers in the Blachernae Church with her omophorion, I always point out that there were, of course, different people in this church: the pious and godly; the not very pious; perhaps some who had grown cold; and perhaps even the very sinful. But did the Mother of God inquire into this?