On the Rebirth of Russia

A Homily for the Centenary of the Revolution

On October 13, 2017, at ninety years of age, the oldest monk of the Trinity-St. Sergius Lavra, the elder and spiritual father known throughout all of Russia Archimandrite Naum (Baiborodin) departed to the Lord.

Members of the monastic brotherhood, the seminary-academy community, and faithful visitors and pilgrims bid farewell to the departed elder in the St. Sergius Trapeza Church at the Lavra.

The Divine Liturgy and burial service was celebrated in the monastery’s Dormition Cathedral on Sunday October 15, at 7:30 AM. The rite of burial was served following the funeral service. 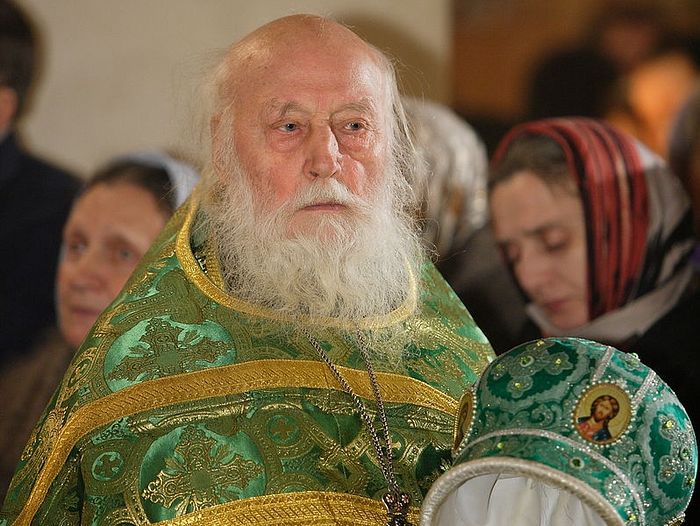 By the preaching of Prophet Jonah, Nineveh and all its inhabitants repented and were saved at that time when their city was to be destroyed. And how many saints we had before the revolution! The holy righteous John of Kronstadt, Blessed Pasha and Pelagia of Diveyevo… After all, they all were able to pray to God that He might not allow the revolution. And how many seminaries, how many parish schools were active in the country then! But the country was already filled with Satanists. Orthodox believers were fired from various management and teaching positions. They put in some Frenchmen. Priests used to teach the Law of God, but by the twentieth century, fornicators began to teach the classes. My mama went to school in 1908. She went once, twice… Then she came and said, “There’s no reason to go to such a school.” “What did they teach you there?” “The teachers say, ‘We will now build a happy life without priests and without the tsar!’” There were so many clairvoyants then—why didn’t they take care of the people? Why did they allow the revolution? And in the army, they turned out to be entirely traitors.

Many of the powers that be in the world today worship the devil. They hate the Gospel, the Church, and Orthodoxy. Everything is perverted with Satanists. It was they who organized the revolution in Russia in the beginning of the twentieth century, and in this century, they have already tried many times to stage coups. But Vladimir Putin took measures to prevent a civil war. A revolution did not happen; no shots were fired.

The main thing is to preserve the unity of the people. It’s still a mystery how all of Europe was working to destroy Russia during the Second World War, but we survived. We were still able to quickly develop the production of tanks and aircraft in sufficient quantity, and even science was developed during the war. When the Soviet authorities were faced with the miracles occurring on the front at the beginning of the war, it was ordered to open churches and to restore the patriarchate. Churches were opened on occupied territories.

The question of faith was critical then. On September 4, 1943, there was a Kremlin meeting between Stalin and the locum tenens of the patriarchal throne Metropolitan Sergius (Stragorodsky), Metropolitan Alexei (Simansky) of Leningrad and Novgorod, and Metropolitan Nikolai (Yarushevich) of Kiev. It was decided then to open the Lavra and to resume theological courses.

Today in Russia it is necessary to identify people so that everyone would be in his place. Saboteurs and stupid people must not be trusted with anything. We need to mobilize now and remove morally defective officials and bosses from management positions. 100 years have passed since the coup was organized in Russia. The Satanists have not abandoned their plans for our country. Now they promote the enemies of Christ in power, who fiercely hate the Church. Start seriously talking about the truth of Christ in a school or an institute and they can fire you. Morally dirty people should not occupy leadership positions. This applies to the heads of individual businesses, municipal governments, and federal ministerial seats.

The people need good leaders today at every level. We need to attract the old and the wise to take counsel with them, that the name of God might not be blasphemed through stupid rulers. We need the people themselves, sensing God’s dispensation in everything in life, to become good. The Lord has given everyone specific talents, and everyone should observe the commandments. They are given for us all. But how do we keep the Law of God if it is unknown? You have to read the Bible, and it’s better to read it in Church Slavonic [for Russians; presumably he is advising against reading the Bible in the vernacular.—Ed.]. I am the Lord thy God… Thou shalt have no other gods before me (Ex. 20:2-3).

The system of legal recognition of same-sex marriage is gaining a foothold in the world now, and laws on changing your gender are being pushed ahead. The Church of England has such marriages, and even some bishops. We must exclude sodomy, the murder of unborn babies, and the sale of land and property of the Russian state. In the provinces, they say, foreigners often buy production in the area, they fire Russians and plunder, drain resources, and they send the money abroad. If this keeps up, you’ll end up having such masters in the Russian land. “Did you come from an ape?” “I am from God!” “So go with God—feed yourselves!”

If evil will spread in Russia, then the end of the world will be nearer. Maybe there will be a great war. If you take a big rope and one pulls on one end, and the other on the other, then obviously in the end someone will be pulled over. If the modern Sadducees and Pharisees, fornicators, murderers, and reprobates win, then the prayer of the faithful will not stop disasters. We must confirm the Gospel, and restore Truth, goodness and holiness. Especially women must restrain themselves in order to stop fornication. Faith in God must be built up, not diminished. Russia will die if blasphemy is not stopped.

It seems the end is already near. Many miracles are occurring now in Africa. Many are receiving Baptism. They are leaving Islam and confessing Christ and the Mother of God. There is a well-known case where a man killed his Christian wife and young daughters, buried them, and one of the daughters appeared to him and said, “Mama breastfed us, the Lord resurrected us all.”

They used to teach the Law of God in schools in the Russian Empire. The people kept the fasts, and kept the apostolic rule. The monasteries were strongholds of faith, and how many miracles happened by the people’s faith! The Church educated the people; there were many parish schools. They would teach how to live for the salvation of the soul, how to save the family, how to raise children to be morally strong and healthy. Everything was done that there would be harmony in society, in families, and in souls. The Church was in alliance with the state; and how was this union incarnated? The Church taught that abortion is murder, and the state forbade abortion. The nation was not dying. We should have a population of almost a billion today! Throughout the twenty years of Tsar Nicholas’ II reign the population grew by fifty million. After the godless period, the population declined by almost a million year. And how many abortions have there been so far? They kill and kill the babies, and the country needs soldiers, scientists… Epistle of the Synod of Bishops of the Russian Orthodox Church Outside of Russia on the 100th Anniversary of the Tragic Revolution in Russia and Beginning of the Godless Persecutions
This year, the entire world, especially we all, will remember the great tragedy of the 20th century which disrupted the fates of millions of people. This calamity literally touched the lives of every Russian family, wherever they may have been. We remember now the hundredth anniversary of the bloody and destructive revolution in Russia.
Comments

Anthony10/19/2017 7:26 am
It's a great tragedy that this elder mentions the antichrist forerunner Sergius as though he were some saviour of the church through his cooperation with the satanic stalin, whilst millions of Orthodox went to their deaths rather than sell their souls for a pottage - since when did Christians ever cooperate with evil to save their positions. Truly tragic it is that the incumbent on the patriarchal throne Kyrill went so far as to bless a graven image, a statue of the said Sergius, praising his 'establishment' of the Church's position in godless soviet russia. And for those who beg to differ, explain how cooperation with an antichrist stalin differs from cooperation with the final antichrist.

Nicholas10/17/2017 8:26 pm
I am concerned with the part about "morally dirty" and "morally defective" people. Can anyone truly say of themselves that they are morally clean and right? I certainly can't say it about myself, and therefore I need to always repent and receive the Holy Mysteries. The statement in the article seems more like a request to judge others, and use some kind of political means to force them out of their positions if they fail to meet a certain standard of conduct. Isn't it better to pray for them, forgive them, and hope that they will also be brought to true life and light in Jesus Christ?

RMM10/17/2017 2:16 pm
Moses,
Please try to inform yourself better, and get out from under the stultifying pile of lies your media has clearly heaped on your mind.
For a start, realise the obvious: that the Elder surely knows his country and its leader better than you do.
Then look for the right information.
God bless you, and free your mind - from the control of the Satanists, as Elder Naum would say.

Emile10/17/2017 12:17 am
Coming from roman catholicism to holy orthodoxy I'm not directly concerned on Russian political matters,BUT:I agree with this venerable monk,it's the same wich happens nowadays every where in Western Europe:abortion,euthanasy,same gender "mariage" etc.,"liberalised",cautioned by infamous laws...this all is satanic anyway,I learned in my childhood that some sins are calling the wrath of God in this world also.
Lord,have mercy on us!!

Joseph10/16/2017 10:15 pm
Moses: This was not an official statement by the Russian Orthodox Church, but by a holy elder of the St. Sergius Lavra. And you are only repeating the propaganda he is talking about by calling the Russian president a profiteer. Do you know better than a holy monk, who cares about his country? And it is naive to think that the Church was attacked in the early 20th century simply because the Tsarist regime fell. The satanists who caused the revolution also persecuted the Church--satanists hate God regardless of the government.

Moses10/16/2017 10:02 pm
"Many of the powers that be in the world today worship the devil. They hate the Gospel, the Church, and Orthodoxy. Everything is perverted with Satanists. It was they who organized the revolution in Russia in the beginning of the twentieth century, and in this century, they have already tried many times to stage coups. But Vladimir Putin took measures to prevent a civil war. A revolution did not happen; no shots were fired."

That's something really bad to say. Putin is a profiteer. The church smudges its image in this way. When Putin falls, she runs the risk of suffering the same as when the tsarist regime fell.