How Should We Live?

When there is nothing left to hope for…

War in the Near East, mass shootings in the U.S., terrorist acts in world capital cities… It would seem that we are no longer even startled by emergency announcements over the television channels—we only check where it happened this time and how many victims. We delve into the details, the different versions, as if we could find some miraculous recipe instructing us how to go on living with all this. But there is no recipe—there is only the understanding that the world as we know it is falling apart. Then there are all the shows about forgotten civilizations, planets, prophecies…

Igumen Nektary (Morozov) talks about “how long we have left”, and what spiritual mistakes cause this panic in us over the destruction of everything and everyone. 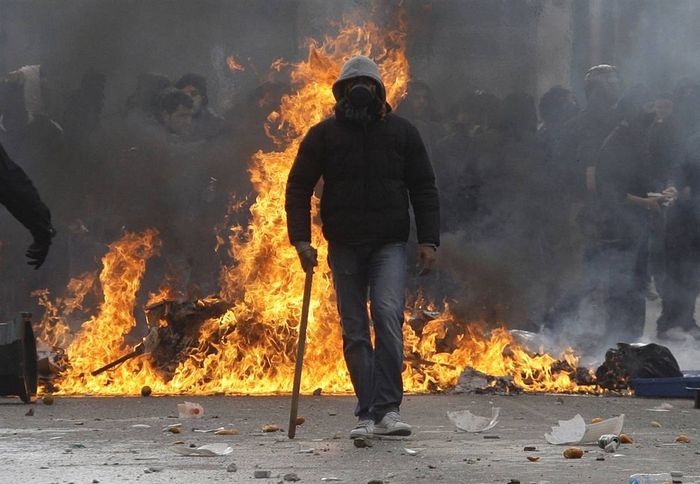 The end of the world

Nowadays very many people are talking about the end of the world—both religious and non-religious. And it’s all interpreted in different ways and framed in all sorts of fears.

Meanwhile it’s quite apparent that there exists a certain periodicity with which conversations about the end of the life on earth come up and then gradually die out. The reason for this is first of all the instability of the world in which we live. For the most part it is always unstable, but there are temporary intervals that particularly suggest caution. At the present time, we also see much that evokes despondency, despair for some, for others indignation and anger. And the feeling arises that there is nothing in the world around us to place our hope in, that man is just a grain of sand, that no one cares if he lives or dies, that no one is concerned with his welfare; we could say that now this is the general feeling to one degree or another, and it has become acute. And based on this—also you might say, typically—interest is renewed in all kinds of mysticism, from independent explanations of the Book of Revelations to studies of the Mayan calendar, which supposedly predicted the end of the world in 2012.

How should a believing Christian relate to such conversations, rumors, and “investigations”? On the one hand, we, as opposed to the rest of the world, should be absolutely sure that sooner or later all that was foretold in the Revelations of the apostle and evangelist John the Theologian will definitely come true. Moreover we have a precise understanding of what will come before the end of the world and just how it will happen, because this was all told to us in Revelations. But on the other hand, we, again as opposed to everyone else, have good cause not to fear these coming events, for it is written in the Gospels: And when these things begin to come to pass, then look up, and lift up your heads; for your redemption draweth nigh… So likewise ye, when ye see these things come to pass, know ye that the kingdom of God is nigh at hand (Lk. 21:28, 31). These are the words of Christ Himself, and they are addressed precisely to us and not to someone else. Nonetheless, instead of this we see that precisely in our milieu, the milieu of Orthodox Christians, the most ridiculous panicky rumors come up at times; confusion arises that in no way agrees with the degree of clarity, steadfastness, and prayerful sobriety with which we should relate to the end of this world.

We choose what we live

What spiritual mistakes do believing Christians make in contemplating the end times? First of all, there is what we might call the belief in prophecies of a non-prophetic nature. Everything that should have been foretold to mankind about the end of the world was foretold in Holy Scripture; there will be no other prophecies or “additional” revelations. Therefore, as soon as someone begins to say that he supposedly knows something more, we can immediately tell ourselves that it’s not true.

Yet another widespread error is the conviction that the world is supposedly progressing—or at least should progress—in the direction of ultimate spiritual advancement. In fact we not only are not advancing but in fact moving further and further away from what was spiritual concentration in world history; we are able to hold on to very little grace, and in our days we no longer see that grandeur of sanctity that was present in the early Church. This impoverishment, degeneration is a natural process, which will continue and increase even more until the end of time. In the last times there will also be those who please God, as the holy fathers said, but they will be almost entirely unnoticed amidst other people, for their activity will be “dissolved in humility”.

There is yet another error (or more precisely, fear), which we sometimes have to encounter. This is some Christians’ anxiety about somehow receiving the seal of the antichrist before the antichrist even appears—that we might receive it not as a matter of choice but somehow inadvertently, through our carelessness. In recent years there have even been false teachings about a “pre-seal”: Supposedly a person can without really understanding what’s going on receive it, and then the antichrist will come along and “stamp” all these people by default as “his”. This is all morbid fantasy—it clearly has no basis in any Church teachings. The same goes for the idea that a person can “not notice” the coming of antichrist. No, everything written in the Book of Revelations will be manifested to people in a perfectly obvious way. And if it should be that this occurs in our lifetime, each of us will make a choice that, albeit under critical conditions, is nevertheless consciously and freely made.

And it is very important that this choice, without a doubt, will be conditioned upon and prepared for by our whole preceding life—by what choices we make every day, every hour, and even every minute. Essentially, the whole multitude of alternatives boil down to two: Do we listen to our own conscience, or do we disdain it.

The subject of the end of the world is also closely bound up with the subject of secret societies—masonic, etc. Some believe and explain to themselves all societal and moral processes from this point of view, while others laugh at this and consider it all ridiculous. But again, every believing Christian is faced with the problem of relating to this wisely.

First of all, there should be no illusions: In the world in which we live there is a ceaseless power struggle, and it will only end when the world ends. And it is hard not to suppose that in this struggle there are also those who struggle for secret world rule. However the end of the world we are talking about cannot be cooked up by any political power, even a world government; anyway these powers have no desire for the end of the world—they want an earthly paradise. However, what happens in our own hearts does speed up or put off the end of the world. For the Lord will put and end to the world’s existence when all meaning in this existence is lost: when people will no longer be born on the earth who desire or are even capable of being with Christ. And in this sense, that short but terrible time when the antichrist will reign on earth will be God’s final mercy towards fallen mankind, for in the face of absolute evil, some portion of people—perhaps infinitesimal—will nevertheless understand Who is the Lord, and at the last minute will rush to Him.

Don’t give in to fatigue

As far as the antichrist goes, we must undoubtedly keep in mind that he will not come out of nowhere—he will come out of chaos. This is a technology that is very effective and quite understandable to modern man: Just plunge any territory into a state of chaos—disunity, horror, despair, and extremely high mortality rates—and when people have no more strength to struggle for anything, nor hope for making any change, bring to center stage one power, one person who will unite everything under himself, put a stop to the disorder, and thanks to this will be given absolute power. But with this the antichrist will demand also renunciation of Christ.

How can we keep from falling into this inner fatigue even when it becomes, as they say, a worldwide trend? The answer may seem simple: Man is in any case subject to falling into a state of apathy rather than trying to discern good and evil in his life. In fact an encounter with evil as such is not the hardest thing of all—it is much harder for a person to literally wander in the thickets, unable to discern where is darkness and where is the light, in the world around him and in his own existence. Therefore, again, this discernment should become a habitual skill for us—every day, every hour, every minute.

When the triumph of vanity is destroyed…

Can we accept the reality around us of a world seemingly crumbling at its very foundations without panic? Yes, and we definitely must. As a priest, I often have to serve funerals; and I can’t help but notice in the assembled mourners not so much sorrowful as frightened and crushed faces, veritably not expecting that the earthly life of anyone close to them could ever end. To some extent they are not paying close attention to what is being sung at the time—and at that moment is being sung (if the funeral is being served according to the complete rite) words that are amazingly profound: “Today the evil triumph of vanity is destroyed…” All the vanity that filled this person’s life is gone, and only what is real remains. In the same way—suddenly, unexpectedly, momentarily, and forever—one day, vanity will disappear for each of one us, and one day, for the whole world as well. Temptation, pain, and sorrow will all end. And the Lord will receive us, as we will ever hope, in His Fatherly embrace. The Dread Judgment
St. John of Shanghai
A search for compromise will be the characteristic disposition of men. Straightforwardness of confession will vanish. Men will cleverly justify their fall, and an endearing evil will support such a general disposition. Men will grow accustomed to apostasy from the truth and to the sweetness of compromise and sin.
Comments

Anthony10/18/2017 8:36 pm
This was such a good article. Thank you Komrades. I like what Father says about the mark of the beast. It is exactly what Geron Efraim Philotheitis says. When discussing the issue of RFID, he says that this is a forerunner of the antichrist. The actual mark will be a stark and informed choice, and each person will either willingly accept it on them or reject it. He also says that if someone receives it through no will of their own, such as an infant then that will not have effect as being ''marked'' since they did not voluntarily consent. God is not unjust to anyone.
×