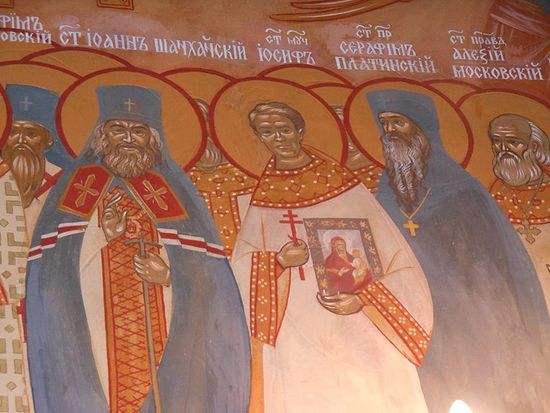 The Russian Orthodox Church Outside of Russia is currently in the process of drafting and gathering documents for the eventual canonization of the guardian of the Montreal Iveron Icon Br. José Muñoz-Cortes. Although there are no plans for his official glorification in the near future, an eparchial commission has been created, which will then give the gathered documents to a Synodal commission for further consideration, Metropolitan Hilarion (Kapral), the First Hierarch of the Russian Orthodox Church Outside of Russia stated in a recent interview with RIA-Novosti.

According to the metropolitan, the ROCOR Synod has, for the time being, not decided to glorify him, because it will take time to gather and study the necessary documents.

“The Synod is opposed to making a rushed decision. Even St. John of Shanghai and San Francisco was not glorified for a long time; his canonization took place more than 20 years after his repose. Many hierarchs even said then that more time should pass,” Met. Hilarion added.

The first hierarch also spoke about the celebrations that will take place in honor of the anniversary of the martyrdom of Br. José in late October at Holy Trinity Monastery in Jordanville, NY. It is expected that thousands from across the U.S. and Canada will attend the traditional pilgrimage to his grave behind the main monastery church. The miraculous and myrrh-streaming Hawaiian Iveron Icon of the Mother of God, which is a smaller replica of the icon that Br. José guarded until his death, will also be present for the celebration.

Met. Hilarion, who will lead the celebration said he knew Br. José well. “The Lord gave him such a wondrous obedience—to be the keeper of the myrrh-streaming Montreal Icon. For many years he took it around to Russian parishes throughout the whole world, and he fulfilled this difficult obedience with love and patience,” Met. Hilarion said.

Br. José Muñoz-Cortes, a Chilean, converted to Orthodoxy in the Russian Orthodox Church Outside of Russia in Montreal, Canada. He was brutally murdered in Athens on the night of October 31, 1997. The icon, which was painted on Mt. Athos and which streamed myrrh almost continuously for fifteen years disappeared without a trace, although many Orthodox believe that it returned to its home on Mt. Athos.

For a fuller biography of Br. José and a recounting of his last days, see the article “Jose Munoz-Cortez, Guardian of the Iveron Icon of the Mother of God.” Jordanville: "And the Light Shineth in Darkness, and the Darkness comprehended it not" – Multitude of Pilgrims gathers to honor Memory of Brother Jose
On Saturday the 29th and Sunday the 30th of October, several groups of pilgrims and individual faithful of the Russian Diaspora gathered at Holy Trinity Monastery in Jordanville, NY, to honor the memory of the guardian of the Montreal Iveron Icon of the Mother of God – Brother Jose Mu&#241;oz-Cortes, murdered 19 years ago. Jose Munoz-Cortez, Guardian of the Iveron Icon of the Mother of God
While the sinister circumstances of his death are still unclear, it is tempting to speculate concerning the motive for such a ghastly murder; after all, the Icon was not in Brother Joseph's possession at the time. From a spiritual perspective, however, the explanation is apparent. As written in an obituary prepared by the Icon's Home: "We live in a time of great spiritual awakening, but the spirit that awakens is that of satan, and all that is of Christ, of Jesus, of God, is a goading irritant to the carnal man, inciting the infernal wrath of the deluded."
Comments

Brother10/19/2017 9:18 am
That would be a huge error.
His assassination does not justify canonization. Quite the opposite