How the Orthodox Church views the Ecumenical Councils 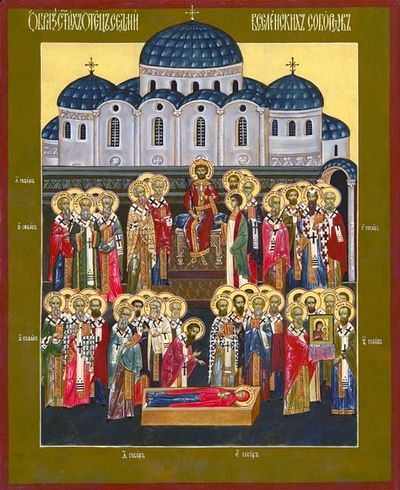 Fr. George Florovsky observed: “The teaching authority of the Ecumenical Councils is grounded in the infallibility of the Church. The ultimate ‘authority’ is vested in the Church, which is forever the Pillar and the Foundation of Truth”[1]

The Patriarchal Encyclical of 1895,[2] which was written in response to a Papal encyclical by Pope Leo XIII, in which he called for the reunion of the Orthodox Church with the Roman Church, states:

“Having recourse to the fathers and the Ecumenical Councils of the Church of the first nine centuries, we are fully persuaded that the Bishop of Rome was never considered as the supreme authority and infallible head of the Church, and that every bishop is head and president of his own particular Church, subject only to the synodical ordinances and decisions of the Church universal as being alone infallible, the Bishop of Rome being in no wise excepted from this rule, as Church history shows.”

And St. Nicodemus of the Holy Mountain states, as he begins his famous commentary on the Ecumenical Canons:

“So every Ecumenical Council that possesses these characteristic features is in fact the Holy and Catholic Church itself in which in the Symbol of Faith (called the Creed in English) we profess to believe. ...being infallible and sinless. For the Church, which the Ecumenical Council takes the place of as its personal representative, is a pillar and framework of the truth, according to St. Paul (1 Tim. 3:15); accordingly, whatever seems right to Ecumenical Councils seems right also to the Holy Spirit of Truth: for, it says, He shall teach you all things and remind you of everything I have said unto you (John 14:26).”[3]

Canon 1 of the Seventh Ecumenical Council states, with regard to all the Ecumenical canons and decrees of the previous Councils (as well as those of local Councils and Fathers whom these Councils specifically affirmed), states:

“For those who have been allotted a sacerdotal dignity, the representations of canonical ordinances amount to testimonies and directions. Gladly accepting these, we sing to the Lord God with David, the spokesman of God, the following words: I have delighted in the way of thy testimonies as much as in all wealth, and thy testimonies which thou hast commanded witness righteousness,… Thy testimonies are righteousness forever: give me understanding, and I shall live (Ps. 119:14, 138 and 144). And if forever the prophetic voice commands us to keep the testimonies of God, and to live in them, it is plain that they remain unwavering and rigid. For Moses, too, the beholder of God, says so in the following words: To them there is nothing to add, and from them there is nothing to remove (Deut. 12:32). And the divine Apostle Peter, exulting in them, cries: which things the angels would like to peep into (1 Pet. 1:12). And Paul says: Though we, or an angel from heaven, should preach to you any gospel besides that which ye have received, let him be anathema (Gal. 1:8). Seeing that these things are so and are attested to us, and rejoicing at them as one that findeth great spoil (Ps. 119:162), we welcome and embrace the divine Canons, and we corroborate the entire and rigid fiat of them that have been set forth by the renowned Apostles, who were and are trumpets of the Spirit, and those both of the six holy Ecumenical Councils and of the ones assembled regionally far the purpose of setting forth such edicts and of those of our holy Fathers. For all those men, having been guided by the light dawning out of the same Spirit, prescribed rules that are to our best interest. Accordingly, we too anathematize whomsoever they consign to anathema; and we too depose whomsoever they consign to deposition; and we too excommunicate whomsoever they consign to excommunication; and we likewise subject to a penance anyone whom they make liable to a penance. For Let your conduct be free from avarice; being content with such things as are at hand (Heb. 13:5), explicitly cries the divine apostle Paul, who ascended into the third heaven and heard unspeakable words (2 Cor. 12:2-4).”

And St. Nicodemus of the Holy Mountain adds two comments in his notes to his commentary on this canon:

“Note here how respectable and reverend the divine Canons are. For this holy Council, by calling them ‘testimonies’ and ‘justifications,’ and the like, dignifies these very same divine Canons with those title and names with which the divinely inspired and holy Bible is dignified.”

“That is why Photius, in Title I, ch. 2, says that the third ordinance of Title II of the Novels invests the Canons of the seven Councils and their dogmas with the same authoritativeness as the divine Scriptures” (Rudder, p. 428f).

[1] The Byzantine Fathers of the Fifth Century http://www.holytrinitymission.org/books/english/fathers_florovsky_2.htm Enduring No Blasphemy
A Homily for the Sunday of the Fathers of the First Ecumenical Council
Archimandrite Cleopa (Ilie)
Beloved faithful! Although the heretic Arius, that greatest heretic in Christendom, and his heresy disappeared, the Church of Christ has been constantly struck by new sects and heresies throughout the ages, some more dangerous than others. St. Photios the Great, the Photian Council, and Relations with the Roman Church
Dr. David Ford

St. Photios the Great, the Photian Council, and Relations with the Roman Church
Dr. David Ford
There is considerable discussion today within the worldwide Orthodox Church about the status of the so-called “Photian Council,” held in Constantinople in 879-880, which deserves to be much more widely known among the Orthodox faithful. And this Council is of special relevance for our Orthodox Church vis-a-vis the Roman Catholic Church, in that 1), it officially prohibited any addition to the Nicene Creed, thus rejecting the Filioque clause, which was in use by many churches in Western Europe at that time; and 2), it implicitly rejected the principle of Papal Supremacy, or jurisdictional authority, over the Eastern Churches. An Exclusive Creed
Fr. Lawrence Farley
Why this insistence on exclusion? The Fathers of Nicea wanted to exclude heresy from the Church for the same reason that a doctor wants to exclude cancer from the body of his patient—because if he includes the cancer in the patient’s body, the result will be the death of the patient. Cancer kills, and so does heresy. Heresy is not simply incorrect opinion, akin to getting a numerical sum wrong. Heresy is stubbornly refusing to accept the truth, in exactly the same way as someone who has been poisoned might stubbornly refuse to accept swallowing the antidote. A person who has been poisoned will die. And the good intentions of the heretic notwithstanding (for who knowingly accepts error?), the person who refuses God’s provided remedy of Christ will also die.
Comments

Jen8/12/2019 3:18 am
Jesse, For those of us who were not raised this way and who are trying to figure out what to believe, it is very necessary to have such articles that provide comparisons and explanations.

Justina10/27/2017 9:43 am
Some argue that the canons are not "juridic" but merely guideposts. while this might be said of some this is clearly not so of others which put serious teeth in them. or they were suitable for their time and circumstance but maybe not in very different circumstances.

Sr. Vassa (Lerin) said that no one is willing to argue some canons should be dropped altogether, they are nonetheless not enforced. at least once a later council changed an earlier canon and Trullo 102 essentially enshrines economia, recognizing that stern application may instead of curing sin contribute to it, inducing despair or whatever. I heard a Greek say concern about non exsanguinated meat or blood added is Islamic.

Jesse10/22/2017 12:48 pm
It's embarrassing that we even need such an article, but, nevertheless, that's where we are in American Orthodoxy, with so many openly denying the traditional sources of the faith. Thanks to Fr. John for a wonderful defense, as always!
×