Lessons from the Brother of the Lord 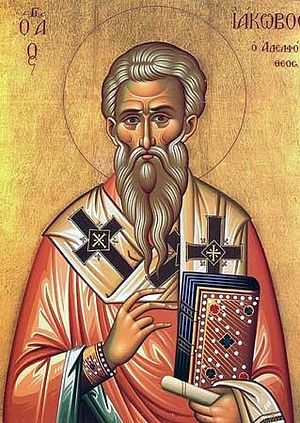 As a change of pace today I thought I would take some time to tell you about Saint James the brother of the Lord and some of his work. As you know there are likely 3 Saints named James in the New Testament. One is St. James the greater, who is the son of Zebedee and the brother of John the evangelist. The next is St. James the less the son of Alphaeus. Both of these James were part of the 12 disciples. Last but not least we have James the brother of the Lord. This James is spoken of in the book of Acts and was considered one of pillars of the early Church and probably the first Bishop of Jerusalem.

He was related to the Lord Jesus Christ because he was the son of Joseph the carpenter. As you know Joseph was married and had children and later when his wife died he became a widower and God chose him to take care of Mary the virgin. St. Jerome writing in the 4th century tells us that “After the apostles, James the brother of the Lord surnamed the Just was made head of the Church at Jerusalem. This one was holy from his mother’s womb. He drank neither wine nor strong drink, ate no flesh, never shaved or anointed himself with ointment or bathed. (the idea here is that he is not a man of this world) He alone had the privilege of entering the Holy of Holies, and went alone into the temple and prayed in behalf of the people, insomuch that his knees were reputed to have acquired the hardness of camels’ knees.” He was murdered by the Pharisees in Jerusalem when he was thrown from the pinnacle of the Holy Temple. This was in response to his fervent preaching of Jesus as the Messiah and Son of God.

And St. Paul tells us in 1 Cor. that James was one of the first people to see the risen Lord after the crucifixion. Also in Acts 15 when there is a disagreement among the Apostles over how the gentiles (the non-jews) should be received into the faith, they turn to James who gives his opinion which is considered authoritative. These are his words “Therefore my judgment is that we should not trouble those of the Gentiles who turn to God, should write to them to abstain from the things polluted by idols, and from sexual immorality, and from what has been strangled, and from blood.” Please notice that all of those prohibitions still exist for us today. St. James helps guide the course of Christianity to be set with a focus on the gentiles that is not merely words but a changed reality. If they wanted these people who did not know God to come into fellowship with us they couldn’t force them to be Jews first…that would be difficult and would turn many away from the faith. They could bring them in and also teach them to love God without obeying all of the outward Jewish laws.

One of the other great works that St. James did was that he wrote the epistle that bears his name in the New Testament. It is a fantastic book. It is 5 short chapters and is straightforward and easy to read. This book focuses very little on Theology or dogma but does a great job of getting to the basics of living a Christian faith practically. “Count it all joy, my brothers, when you meet trials of various kinds, for you know that the testing of your faith produces steadfastness. And let steadfastness have its full effect, that you may be perfect and complete, lacking in nothing. If any of you lacks wisdom, let him ask God, who gives generously to all without reproach, and it will be given him. But let him ask in faith, with no doubting, for the one who doubts is like a wave of the sea that is driven and tossed by the wind. For that person must not suppose that he will receive anything from the Lord; he is a double-minded man, unstable in all his ways.” James 1:3-8 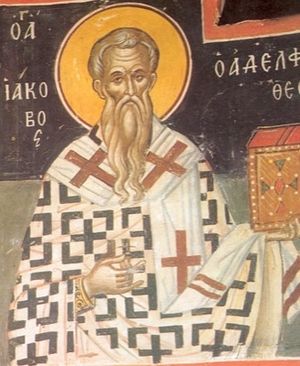 St. James also teaches about how our Christianity should be alive, he writes “Pure and undefiled religion before God and the Father is this, to visit orphans and widows in their afflictions, and to keep oneself unspotted from the world.” And he adds more to this “What good is it, my brothers, if someone says he has faith but does not have works? Can that faith save him? If a brother or sister is poorly clothed and lacking in daily food, and one of you says to them, “Go in peace, be warmed and filled,” without giving them the things needed for the body, what good is that? So also faith by itself, if it does not have works, is dead. But someone will say, “You have faith and I have works.” Show me your faith apart from your works, and I will show you my faith by my works. You believe that God is one; you do well. Even the demons believe and shudder!” His idea that faith without works is dead was so offensive to reformers like Martin Luther that he wanted to have the book of James removed from the Bible. This is the arrogance of modern man. When we don’t like what is in the Bible, or when it disagrees with us, we imagine that it isn’t there or that it wasn’t meant for us.

While there are many other points to focus on in the epistle of St. James, the last one we will look at today is on prayer. St. James says “The prayer of a righteous person has great power as it is working. Elijah was a man with a nature like ours, and he prayed fervently that it might not rain, and for three years and six months it did not rain on the earth. Then he prayed again, and heaven gave rain, and the earth bore its fruit.” This is a reminder that nothing in the world is so powerful as the fervent prayers of the righteous. When all the troubles of life hit, we are reminded by St. James that prayer has a powerful effect. Prayer can not only help us in our personal lives, it indeed has power to transform the world around us and when we pray humbly and fervently we see that we can effect great change through God’s power. When we honor God, He honors us.

By the prayers of the righteous Apostle and Martyr Saint James, May God hear us and help us to apply and live our faith to the Glory of God, the Father, Son and Holy Spirit, AMEN. The Lord’s Brethren
Sergei Khudiev
First of all, what does the word “brethren” mean? In the Bible it can signify various degrees of relation: blood brother, half-brother, or cousin. Some Protestant Bible scholars consider that after giving birth to Jesus, Mary had children by Joseph, and it is these children who are mentioned here.
Comments
×