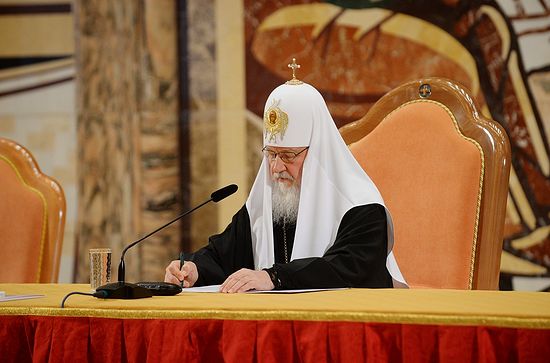 The fight against abortion is, and must remain, the Orthodox Church’s main social work, His Holiness Patriarch Kirill of Moscow and All Russia stated at the opening of the VII Church-wide Congress for Social Work in Moscow, reports Interfax-Religion.

“A few years ago I raised the issue of the need to pay special attention to the problem of abortion in our country… And I now repeat: It is our highest priority,” the patriarch stated at the meeting held in the conference hall at Moscow’s Christ the Savior Cathedral.

In this work, the primate pointed out, it is important not only to call women not to have abortions, but to help them in life, analyzing the reasons for abortion, especially among young and very young women. According to the patriarch, these reasons include material instability, parents’ anger, and difficult daily conditions, such as a small living space and a lack of funds.

The head of the Russian Church said he has done a lot of work with governors and diocesan hierarchs to create homes for future mothers in every province, where any pregnant woman could receive the necessary support. “I cannot say that everything is working well; there are issues in Church-state relations, but my call was heard,” Pat. Kirill continued.

Russian Minister of Health Veronika Skvortsova also addressed the issue, saying, “We understand that our most important common task is the fight against abortion, and we have tried to do a lot together in this direction. We have opened 1,500 abortion prevention centers and officers throughout the country, at maternity clinics and wards, and prenatal centers.”

“We will continue the work in this direction, Your Holiness,” Skvortsova affirmed.

According to statistics referenced by the patriarch, 650,000 abortions were performed in Russia in 2016. “A city like Tyumen has 744,000 residents. That means an entire city was lost within a year,” he continued.

The Church conference on social work is being held in Moscow from October 25 to 27, with more than 2,000 taking part in it, including leaders of the Church’s social projects, diocesan social work department heads from Russia and other countries, sisters of mercy, social workers, and volunteers. The forum will discuss issues of protection of motherhood and the prevention of abortion, and the support of large families. No Church ministry should be used for personal purposes, says Patriarch Kirill

Peter Matthew Fitzgerald. EnviroUnison10/30/2017 5:45 am
Please pray for an end to abortion everywhere, GOD Bless you all. thanks for your good service to all people everywhere. Thanks Peter Matthew
×