Relics of St. Seraphim of Sarov arrive in Romania 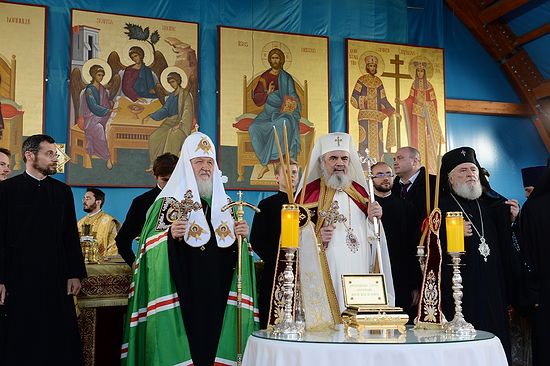 His Holiness Patriarch Kirill of Moscow and All Russia and His Beatitude Patriarch Daniel of Romania headed the transferal of the reliquary containing a portion of the relics of St. Seraphim of Sarov to the spiritual center of the Romanian Patriarchate yesterday, reports patriarchia.ru.

The relics were placed before the altar, after which a moleben to St. Seraphim was celebrated. A number of hierarchs, clergy, monastics, and faithful of the Romanian Orthodox Church participated in the prayers.

At the conclusion of the service, Pat. Daniel greeted Pat. Kirill and all participants on behalf of the clergy and laity of the Romanian Orthodox Church, saying, “Thank you, Your Beatitude, beloved concelebrant in Christ, that you have arrived for the great feast of the patriarchal cathedral and city of Bucharest, on the day of the St. Demetrios the New! The blessing and joy that the feast of St. Demetrios the New brings to us is increased this year by the presence in Bucharest of the relics of St. Seraphim the wonderworker of Sarov … who is very well known and venerated in all of Orthodoxy.”

The Romanian patriarch noted that, although St. Demetrios and St. Seraphim lived in different times and places, they share the same gift of holiness, and both experienced persecution against their relics by the communist regimes in their respective countries. Just two months after Ceaușescu banned the celebration of St. Demetrios day in 1989, his government had fallen, and the people were on the streets of Bucharest shouting “God is with us!”, as Pat. Daniel related.

In turn, Pat. Kirill thanked Pat. Daniel for the invitation, noting that he was excited to visit “the blessed Romanian land and to see firsthand the piety of the faithful Romanian people.”

“With love I convey to Your Beatitude these relics with the desire that by the prayers of our venerable and God-bearing father Seraphim of Sarov, the Lord would grant our countries and peoples peace and prosperity for many years,” Pat. Kirill concluded.

Then the relics and an icon of St. Seraphim were placed with the relics of St. Demetrios for the veneration of the large number of believers that had gathered for the celebrations. Pat. Kirill to bring relics of St. Seraphim to Romania

Pat. Kirill to bring relics of St. Seraphim to Romania
His Holiness Patriarch Kirill of Moscow and All Russia will attend this year’s celebrations in honor of St. Demetrius the New, the protector of Bucharest. As a special blessing, he will bring with him a particle of the relics of the inestimable St. Seraphim of Sarov.

From the Life of St. Seraphim of Sarov
Helen Kontsevich
As a beginning, Prokhor set off with five companions to the Kiev Caves Lavra, desiring to receive the blessing of the Kiev Elders. Among the ascetics of that monastery was the famous elder Dositheus (who was found to be a woman after she died). That clairvoyant elder had been in continual contact with the blessed Elder Paisius Velichkovsky, and with those monastics who were of one mind with him. Dositheus gave Prokhor spiritual instruction, counselled him to study the ancient Holy Fathers on the work of interior prayer, and directed him to go to Sarov Monastery and remain there until death, for there he would find salvation.
Comments

Matushka Joanna Kuolt11/18/2017 4:28 am
Wonderful articles accompanying original. Thank you so much!! St Saraphim of
Sarov is such a powerfully loving, and gracious intercessor!!
×