How Today's Abortion Survivors are Fighting for Life in Romania 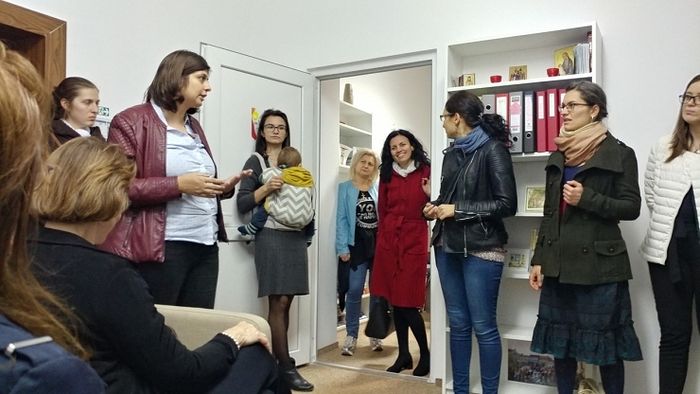 Cutting the ribbon at the Oct. 1 inauguration of the Counseling Center for Parents & Children "St. Alexandra the Empress" in Bucharest, Romania, 24-year-old Alexandra Nadane marked eight years along her journey into pro-life leadership. That journey began with an email.

As a 16-year-old volunteer at a social services agency, Nadane showed her director an email from a pregnant woman pleading for help with circumstances so bleak that others were pressuring her to have an abortion.

“It’s not our problem; ignore this email,” the director said.

“I was shocked,” Nadane said. “For me, it was normal to help a woman in this situation, with no job and under intense pressure from her parents and her partner.”

Since her agency refused to help, Nadane went to meet with the young woman herself. She reminded the woman that her relationships could be restored, but an aborted child could not. Encouraged by Nadane’s personal concern, the young woman resolved to keep her child.

But would she hold firm once she got home? Nadane went with the woman to talk with her parents. “I told them, ‘Make me a list of all your daughter’s problems and I will resolve them,’” she said. Though doubtful that a 16-year-old could deliver on such a rash promise, the woman’s parents made the list.

“I went home with that list and prayed, ‘God, what have I done?’” Nadane said.

Within two days, people had stepped forward to meet the woman’s needs. Press Release: The Romanian March for Life 2017 – “Help the Mother and Child! They Depend on You”
This series of thematic events does not have a unique organizer, but in each town and city it has different independent local organizers from local pro-life organizations and institutions. Here are a few aspects motivating the theme chosen for this year:

Archpriest Dmitry Smirnov: If we don’t stop committing abortions, the Lord will wipe us from face of earth
“To expect some prosperous marriage or some kind of joyous life after infanticide is simply ridiculous. A person can find no kind of happiness if he is a murderer of his own children. Such cannibals, as our people, need to be wiped off the face of the earth, and only the great grace of God towards us (for we are all His children) will save us from the wrath of God. But if we don’t wake up, the wrath of God will fall upon us,” stated Fr. Dmitry.
Comments
×