Figure It Out Yourself

One of the multitude said to Jesus, “Teacher, bid my brother divide the inheritance with me.” But Jesus said to him, “Man, who made me a judge or divider over you?” And he said to them, “Take heed, and beware of all covetousness; for a man’s life does not consist in the abundance of his possessions.”   (Luke 12:13-15) 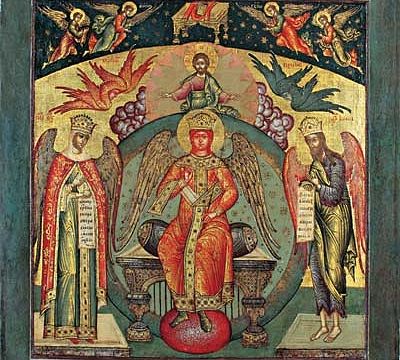 Wisdom is as an essential element of our Scriptures and Tradition as is any set of rules or rubrics that have been offered to the faithful. And yet, Wisdom is often given a secondary place in the pedagogy of the Church as many in leadership roles prefer to lay down the law of God rather than to wrestle with Wisdom. In the early Church they relied on the Book of Proverbs as a manual for instructing catechumens, to prepare them for baptism and living the life in Christ. To this day the Orthodox continue to read Proverbs during Great Lent as a source for wisdom in living in a fallen world.

Besides the Wisdom literature of the Old Testament, there also emerged in the early centuries of the Church’s history the Wisdom of the desert fathers and mothers – not lives of the saints but wise sayings designed to make us think about how to live the Gospel. This wisdom literature is related to the parables that Jesus taught in which He did not give law, but rather offered instruction for all believers to ponder. The parables like the wisdom sayings often have a hidden, deeper meaning to them.

The following story from the desert fathers gives us a sense in which wisdom was understood to be different from the Law. Law involves a more black and white thinking while wisdom considers how and when to apply the law or when it is correct to vary it. For example, a stop sign is the law. But that stop sign can never tell the driver when to go – to take that action requires wisdom. In this story a monk wants to know what to do with an inheritance he has received. Perhaps he was trying to avoid deciding himself what to do so he wouldn’t make the wrong choice. He wants the monastery abbot to decide for him – not to give him a word, but give him a rule. Abba Poemen wants the monk to learn to live the Gospel himself. Poemen offers an answer to the monk in terms of wisdom: he tells the monk what to do by not telling him what to do.

A brother asked Abba Poemen: “A legacy has been left to me; what shall I do with it?” The elder said to him: “Go away and come in three days then I will tell you.” He came as he had directed him and the elder said to him: “What am I to say to you, brother? If I say to you: ‘Give it to a church,’ they will have banquets there; if I say: ‘Give it to your relative,’ there is no reward for you; but if I tell you: ‘Give it to the poor,’ you will have no worries. Do whatever you like; this is not my business.” (Give me a Word, p. 233)

Poemen shows the monk he has actually considered his request about the inheritance. Giving the money to the church is a good thing, but he realizes it will cause the church community to celebrate and waste some of the money by benefiting no one but themselves. He could simply give the money away to relatives and be free of it himself, a noble thing, but of no spiritual benefit to the monk. Or, the monk could give the money to the poor and not worry about it any more, though humanly speaking people might fear the poor wouldn’t use the money wisely. Any of the actions could be proper for a monk because the monk is freeing himself from the cares of wealth. Each possibility could be good and each has a downside. Poemen is telling the monk to free himself of the inheritance, but refuses to give the monk a rule about it. The monk is going to have to decide for himself how to fulfill the Gospel commands. There may not be just one right answer, only one choice pleasing to God. Poemen, however, refuses to burden himself with the inheritance! The God of the Bible
Met. Saba (Esber)

The God of the Bible
Metropolitan Saba (Esber)
There are certain erroneous or distorted beliefs that are widespread among the faithful. Sentenced to Life
Fr. Patrick Henry Reardon
The Good Shepherd, even as He forfeits His individual human life (psyche) for the sheep (John 10:11,15, 17), never loses the essential life (zoe) He receives from the Father: “In a little while the world will no longer see me, but you will see me; because I live (zo), you also will live (zesete)” (14:19). The life of which John speaks is Christ Himself. This truth is conveyed in a series of “I AM” declarations: Concerning Humility of Wisdom
The Second Instruction
Abba Dorotheos
Thus, let us also be humbled a little, and we shall be saved. If we who are infirm cannot labor, then let us try to be humbled; and I believe in the mercy of God that for the little we do with humility, even we shall be in the place of the saints who have labored much and worked for God. Even if we are infirm and cannot labor—can it be that we cannot become humble? Blessed, O brethren, is he who has humility. Great is humility! One saint who had true humility said it very well: "Humility does not become angry at anyone and angers no one, and it considers anger completely foreign to itself."

May God give you wisdom! The Letters of Fr. John Krestiankin

Anthony11/18/2017 12:16 pm
I think the answer to the monk's conundrum lies in prayer. That point is missing from the above. God has to enlighten us to make the right choice. Without God's illumination and our will submitting to His, even the best of works will be fruitless

Joseph Bell11/17/2017 9:13 pm
Is the icon depicted here Orthodox? The Holy Wisdom is the wisdom of God.
We do know that as far as human wisdom goes, it is not as important as faith in God. God showed us this through the life of King Solomon.
×