Jairus and the Bleeding Woman: Homily for the 21st Sunday After Pentecost in the Orthodox Church 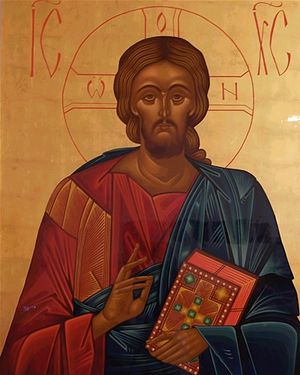 Sometimes we think that everyone has to approach God in exactly the same way. After all, we are Orthodox Christians. The Divine Liturgy and other services are set; they don’t change and are celebrated in by the Orthodox around the world. Our beliefs were defined through ancient councils. Our spiritual practices have been passed down over the centuries by countless generations. The Holy Spirit has preserved our church in a unity that is unique among Christians. But that unity doesn’t mean complete uniformity in the sense that we all must or should do exactly the same thing. We are all distinct, free persons; and it’s as such that we will find God’s blessing and salvation in our lives.

We read in today’s gospel passage about two very different people who approached Jesus Christ in different ways. One was Jairus, a ruler of the synagogue. He was an upstanding man in the Jewish community. His position indicates that he had a good reputation and was thought to be a righteous man. The other person was very different. She was a woman who had been bleeding for twelve years, and had spent all her money on treatments that did not work. Not only was she now poor, she was also considered unclean because of the flow of blood. She was isolated: anyone who had physical contact with her would also become unclean. She could not even enter the Temple or have a normal social life. She had been treated for twelve years as though we she was cut off from God and everyone else.

Jairus sought out the Lord and asked Him to heal his daughter, who was dying. But the woman—whose name we do not know—could not bring herself to do even that. She knew her place: a poor, isolated, unclean woman not worthy of the attention of the Messiah. She couldn’t ask Him to lay hands on her for healing, for that would make Him unclean also.   She was surely embarrassed to discuss her medical condition with Him in the midst of a large crowd. All that she could find the courage to do was to reach out anonymously and touch the hem of His clothing. She had enough faith, enough hope, and enough courage to do that.

And when she did, she was healed. She had not made Him unclean; instead, He had made her well. But she was scared to death when Jesus Christ asked, “Who touched me?” She knelt down before the Lord in humility, and trembling with fear, confessed to Him-- and to the rest of the crowd—that she was the one.   Yes, she said out loud why she had touched Him and how she was healed immediately. And then the Lord said, “Daughter, be of good cheer; your faith has made you well. Go in peace.”

This story shows the tremendous mercy of our Lord. This woman had not said a word to Christ and had not even identified herself to Him. She didn’t ask Him to make a decision to help her. She was probably too afraid and humble to do those things. But she did what she could, reaching out to Christ in faith. The Son of God knew who had touched Him, of course, but asked who it was in order to give her an opportunity to confess her faith, to make clear to herself and to those in the crowd that our Lord’s healing mercy extended even to her, that His mercy overcomes all the uncleanness and misery of those who come to Him in humble repentance.

At different times in our lives, we will all identify this woman. Perhaps we have a long-term struggle, a weakness or cross that we have borne for years. Perhaps we wrestle with some deep embarrassment or humiliation in our lives that we are afraid to acknowledge even to God, let alone other people. Maybe we have done or suffered something that makes us feel unclean or unworthy in our relationship. Maybe we can’t find the words to express our pain even to God in prayer, much less to others. We may feel cut off from the Lord and separated from family and friends.

If that’s the case, we should follow this woman’s example of touching the hem of His garment, of reaching out to Christ for mercy, healing, strength, and forgiveness as best we can. He will not embarrass us or send us away. Instead, He will respond graciously, as He always did to humble, sincere people who came to Him with faith, love, and repentance.   We won’t make Him unclean; instead, He will make us His beloved sons and daughters.

Jairus approached Jesus Christ differently, openly asking Him to heal his dying daughter. But his faith is then put to a very hard test. For the girl dies, but the Lord says that she is only sleeping. Everyone ridicules the Savior for this. But Jairus somehow believed the astonishing word of the Lord: “Do not be afraid; only believe, and she will be made well.”

Can you imagine how hard it must have been for Jairus and his wife to hear this news and to believe in the Lord’s promise? Their daughter had just died and the mourning had begun. It was time to start getting ready for the funeral, and here was Christ saying that the girl would soon be alive again. Their faith was put to the test, but they did believe. And the Lord did as He said: He gave them back their daughter alive and healthy.

This healing was not as simple as Jairus had hoped. He was probably used to getting what he wanted. Surely if anyone deserved the help of the Messiah, it was an upstanding leader of the synagogue. But just as Abraham’s faith was tested by the command to sacrifice Isaac, his faith is tested when—to all appearances—his daughter is dead and gone. It is one thing to heal the sick, but quite another to believe that someone can raise the dead. But probably with a great deal of fear and all kinds of doubts going through his head, Jairus believes. He trusts as best he can. And through his faith, the Lord works a great miracle.

People are different. We have distinct personalities, occupations, interests, and spiritual strengths and weaknesses. But we can all have faith. When we open the wounds and sorrows of our lives to Christ as best we can, He will hear us. And He will respond in the way that is best for our salvation, for our growth in holiness. No two people have exactly the same journey to the Kingdom. No two people pray, fast, give alms, forgive, and serve in precisely the same way. Jairus and the woman with the flow of blood were very different people who approached Christ differently. But the one constant factor is the mercy of our Lord, which extends to all who call upon Him from their hearts with humble trust.

If you are prepared to receive Communion today, I urge you to approach the chalice with “the fear of God and faith and love.” For we do not simply touch the hem of Christ’s clothing in the Eucharist or ask him to heal our sick child. We do far more, for we eat His flesh and drink His blood. We commune in the most intimate way possible with the One Who has conquered sin and death. And we do so praying that Jesus Christ will heal the deepest wounds of our souls and make us participants in the eternal life of the Kingdom. We receive Communion by name, as unique individuals whose only hope is in our Lord.   Jairus and the woman came to Him in faith as best they could. We should do the same. Sermon on the Healing of the Woman with the Issue of Blood
Twenty-Third Sunday After Pentecost
Archpriest Andrew Phillips
Today's Gospel concerns two miracles, one the healing of an illness and the other the overcoming of death. These two miracles are closely linked, for both illness and death have the same origin, the same cause, they are both the result of sin, both entered the world as a result of the sin of Adam. As the Apostle Paul says in his letter to the Orthodox Christians in Rome, 'the wages of sin are death'.
Comments

Anthony 11/20/2017 10:22 pm
Father Philip. How I wish I could find a confessor like him in my country. Such a rarity. Every one of his writings, every week hits me like one massive thunderbolt. May God bless him always.
×