The Robe of Divinity

On the Higher Virtues of St. Nektarios 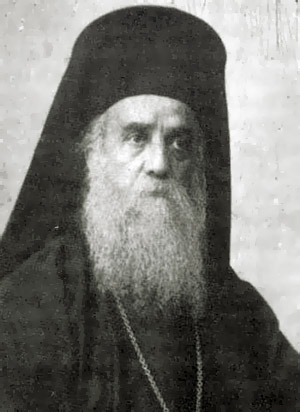 St. Nektarios
On November 22, 1920, in a modest Athens hospital reposed an old monk in a worn-out cassock. For two months he lay in the terminally ill ward, burning with cancer. He had no money and no Panagia, although he had the episcopal dignity.1 But at that very moment when the soul of the bishop parted from his body, a wondrous fragrance flooded the hospital ward. The clothes of the reposed were placed on the paralytic lying beside him, who immediately jumped up, blessing God. The sweet fragrance did not diminish in the ward for half a year. The Lord thus glorified His saint who had avoided human praise, and, being a metropolitan, tried to live discreetly. The Orthodox Church thus acquired a saint by the name of Nektarios, revealing in our godless age the fullness of humility—the virtue, which, according to the Fathers, is “the robe of Divinity.”2

Of course, only the perfect know of humility, but we can grasp the essence of humility, beholding its manifestation in holy people,3 as in gazing upon the visible world you can comprehend the greatness of the Creator of the world. Humility also manifests itself in the awareness of one’s own weaknesses and infirmities, in confessing oneself as least of all, in hoping in God alone, in the steadfast endurance of insults and in the complete renunciation of one’s own will.4 All of these qualities were fully manifested in the life of St. Nektarios.

As a child, being in great need, Anstasios “the Simpleton,” as the saint was then called, experienced human weakness and the omnipotence of the Creator, having sent a letter to God: “My Christ! I have no smock, no shoes. I ask Thee to send them to me. Thou knowest how I love Thee.” And that same day, God fulfilled his request sent to the address, “The Lord Jesus in Heaven.”

The saint sincerely esteemed himself the least of all people. Once, when he was already the director of the theological school in Athens, the school janitor became seriously ill. There was no social insurance in Greece at that time, and the poor soul should have lost his job. Having recovered, he found the school perfectly clean. Fearing that he had been replaced, he arrived early in the morning and … found the director sweeping the bathroom with the words, “Sweep, Nektarios! It’s the only thing you’re good for.” Having seen the janitor, the metropolitan called him over and said, “Don’t be surprised! I subbed for you so you wouldn’t lose your job. But be careful: Tell no one about this as long as I’m alive!”

When another bishop would come to the school church, the saint never took the first place, even if it belonged to him by right, but he would stand on the right side of the altar, vested in a small omophorion and black monastic klobuk. He almost never wore his Panagia, but like Batushka Seraphim, openly wore only a small pectoral cross.

In The Ladder of Divine Ascent, St. John Climacus writes of three degrees of humility. The first degree consists in the joyful endurance of abasement, when the soul embraces it with arms wide open as medicine. At the second degree, every anger is exterminated. The third step consists of a complete distrust of our own good deeds and the constant desire to learn.5

He often experienced human malice, envy, and hatred against himself, but he never murmured against God, and meekly received the trials sent by Him. As the metropolitan of Pentapolis,6 this most-pure man, having tremulously guarded his chastity, was expelled from Egypt on charges of immoral behavior. He was slandered by a confidant of the elderly patriarch of Alexandria, who feared that St. Nektarios, beloved of all, would become the new patriarch. He had to leave for Athens, where for two years he shared his bread with beggars, camping out on the doorsteps of local ministries to at least find some place. On Aegina,7 not long before his death, he drank the final, bitter cup. The mother of one of the girls received by him in the monastery accused the saint of making her daughter and the other nuns his mistresses, and of dumping the children born by them to the bottom of the monastery well. The judge, who believed the slander, burst into the monastery with several policemen. He beat the saint, yelled at him, and dragged him by the beard while he silently prayed. Of course, no one was found in the well, and the girl was sent for an examination with a gynecologist who acknowledged her virginity. The girl’s mother, not having repented, went insane, and the judge became terminally ill, and, having comprehended the cause of his sickness and having besought forgiveness from the saint, he was healed.

If we speak of the abandonment of anger, the saint passed through this level even before his tonsure. When he served as a rural teacher on Chios, a young boy, helping him in the kitchen, once forgot a pot of food on the open fire. The food burned, and the building itself was in danger. Flaring up, Anastasios gave the young helper two slaps, but he immediately repented. He asked forgiveness from the boy, and for punishment for his sin, he besought God for the complete loss of his sense of taste. God fulfilled his request: Until his death, St. Nektarios felt neither anger, nor the taste of food he took. Thus did the saints labor even unto blood!

The entire life of St. Nektarios was filled with disbelief in his own works, and a constant desire to learn. 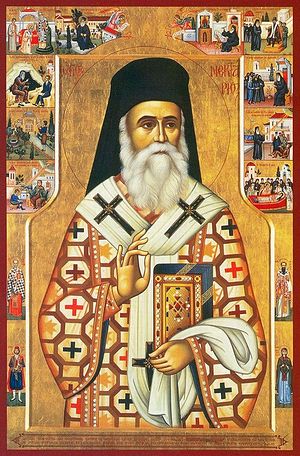 St. Nektarios
Being perfected in humility, he could not but love prayer, of which St. John Climacus writes, “You will truly know that the holy essence of humility is in you when you are filled with ineffable light and unspeakable love for prayer.”8 St. Nektarios was often so immersed in Divine meditation that he wouldn’t hear a knock at the door. If his visitors decided to open it a crack, they would see him detached, standing on his knees, with arms uplifted to Heaven, and eyes fixed above. One time a little boy saw the saint as if bathed in a radiant golden light. “Fire! Fire!” the child yelled out and began to extinguish the burning tongues of fire which were coming from the face and body of the saint.

Not long before his death, she who is more honorable than the Cherubim appeared to the humble Pentapolis metropolitan, leaving the wondrous beauty of the hymn, now translated into nearly every language on earth, known as “Agni Parthene.”9

There is nothing in this world more beautiful than humility. It is the robe of Divinity and the ineffable fragrance of the saints. Humility is the highest of the virtues and, at the same time, their foundation. “Humility,” writes St. Ephraim, “is the garden of Paradise, a table of sweets, the beginning of goodness, and the fountain of blessings. By it sins are cleansed, the guilty are justified, the wayward return to the true path, the perishing are saved, the battling triumph, and victors are crowned.”10

Salvation is impossible without humility. We are not made humble by modest dress, a downcast gaze, or silent lips, nor even by going to the churches of God. If we are offended by slanderers and abusers, alas, we have no true humility. If we are angered by our enemies, we have no true humility. If we esteem anyone lower than ourselves, there is no humility within us! But how can we acquire it? Pondering this, St. John Climacus writes, “If we want to achieve humility, we must not cease to test ourselves; and if we truly think that every neighbor is superior to us, then the mercy of God is not far from us.”11 So as not to elevate ourselves, we can, according to St. John, weep for sins once committed until the end of our lives, even if they are forgiven. You can daily condemn yourself for the “disrepair” of your life. You can reflect upon the sufferings of our Lord Jesus Christ,12 the sinless God, Who for the sake of us sinful men once entered into the womb of the Virgin Mary, and, being born, endured hunger and thirst, heat and cold, for several years. Being the Creator, He endured vilification from his haughty creation, being the giver of all good things; for all the blessings shown to the world, He was awarded simply with a sponge soaked in vinegar and crucifixion upon the Cross! It is possible and necessary, in the end, to humbly and patiently endure everything allowed for us by God that we are not in a condition to fix; for, as St. Nektarios once wrote, “To humble oneself means to cut off one’s own will.”

1 Bishops wear an icon of the Theotokos, known as a “Panagia”—Trans.

2 “Humility is the robe of Divinity. It clothed itself in the incarnate Word, and through Him united itself to us in our body,” St. Isaac of Syria, Ascetical Homilies 53 (in the Russian numbering).

3 “Thus, we cannot say what is the power and essence of this sun (humility), however we can grasp its essence by its properties and action,” St. John Climacus, The Ladder of Divine Ascent 25:26.

4 “Then one said that humility ‘means constant oblivion of one’s achievements.’ Another: ‘It is the acknowledgement of oneself as the last of all and the greatest sinner of all.’ And another: ‘The mind’s recognition of one’s weakness and impotence.’ Another again: ‘In fits of rage it means to forestall one’s neighbor and be first to stop the quarrel.’ And again another: ‘Recognition of divine grace and divine mercy.’ And again another: ‘The feeling of a contrite soul, and the renunciation of one’s own will.’” The Ladder of Divine Ascent 25:3

6 Pentapolis is an ancient Egyptian city, now located within the jurisdiction of the Patriarchate of Alexandria.

7 One of the Saronic Islands, seventeen miles from Athens.

10 St. Ephraim the Syrian, On Humility and Pride “Do you want to see an angel?”
Olga Rozhneva

“Do you want to see an angel?”
St. Nektarios and his instructions
Olga Rozhneva
November 9/22 we remember St. Nektarios of Aegina, a modern ascetic and wonderworker. His life is amazing: the Lord manifested in a visible and tangible way His care for those who please Him. The saint acquired the gifts of the Holy Spirit: unceasing prayer and spiritual discernment, healing, clairvoyance, and prophecy. When he served the Divine Liturgy, in a prayerful state, his face radiated light which was visible to others. Saint Nektarios of Aegina
Commemorated November 9/22
With the passing of St. Nektarios, a hospital nurse, assisted by a nun from the monastery, immediately began to change his clothes and threw his undershirt on the next bed. In this bed lay a paralytic, who once the undershirt landed upon him, was instantly healed and jumped out of bed praising God for his miraculous healing.
Comments

Anthony11/22/2017 3:31 pm
Sorry this artikle has an error. It says the wicked slanderous judge was healed. He was not. His wife came to plead for forgiveness from Pater Nektarie to which Pater Nektarie graciously acceded. However the wicked judge was not healed but died and went to the judgement. Read Sotos Chindropoulos' Saint Nekatarios - the saint of our century for further info. Please remove incorrect info. Thanks.
×