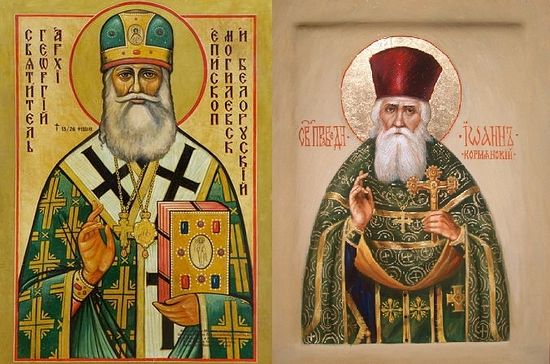 The Council of Bishops of the Russian Orthodox Church, currently convened in Moscow’s Christ the Savior Cathedral, will consider the question of approving two locally-venerated Belarusian saints for Church-wide veneration, patriarchia.ru reports.

The Holy Synod of the Russian Church, meeting yesterday on the eve of the opening of the Council of Bishops, heard a report from His Eminence Metropolitan Pavel of Minsk and Zaslavl, the Patriarchal Exarch of All Belarus, and a report of His Grace Bishop Pankraty of Troitsk, Abbot of Valaam Monastery and Chairman of the Synodal Commission on the Canonization of Saints, on the inclusion in the general Church calendar of St. George (Konissky), Archbishop of Mogilev (†1795), and Righteous John of Korma (Archpriest John Ivanovich Gashkevich, †1917), currently locally-venerated only in Belarus.

The members of the Holy Synod decided to include the issue in the agenda of the Council of Bishops’ session, having heard Bp. Pankraty’s report on behalf of the canonization commission, detailing the official materials relating to their canonizations in Belarus, as well as evidence of their veneration throughout all dioceses of Belarus and in Ukraine and Russia as well.

It was previously reported that several locally-venerated Ukrainian saints will also be considered for Church-wide veneration at the current Council of Bishops of the Russian Orthodox Church.