On the Types of Tears

The elder Archimandrite Cleopa (Ilie, April 10, 1912-December 2, 1998) is widely known as a great spiritual father of Romanian monasticism and a guide for many laymen, thousands of whom went to him for spiritual aid. We offer here a fragment from the Russian publication of his book The Soul’s Worth, published by the Sretensky Monastery Publishing House. 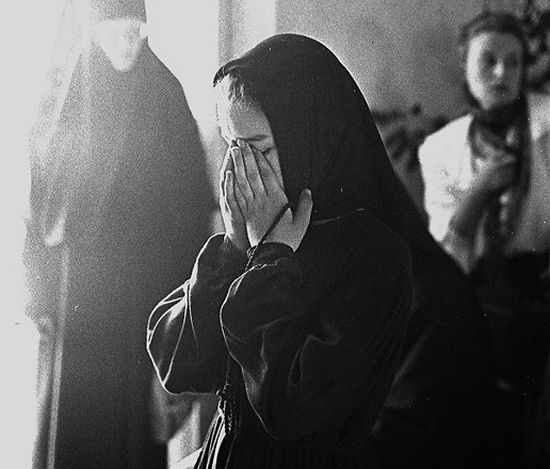 The devil is mingled in with every virtue. Have you seen the hop plant? It clings to everything it encounters in its path: to a fence, a post, a gate, a pole, to wood. And you see—it just grows, obliviously. So the devil does with every virtue—coiled around it to make it useless, so it would no longer be a good deed.

How great is the gift of tears! But even here the devil introduces temptation. The devil is bound up with various types of tears, to make man’s tears in prayer in vain, that they would not be accepted by God.

True tears, flowing from love for God, possess such power, says St. John Climacus, that “greater than Baptism itself is the fountain of tears after Baptism.”[1] And St. Gregory of Nazianzus says, “I know a fifth baptism, which is born of tears, from tearful repentance, and such strength this baptism has that it is greater than the first Baptism, because the first Baptism washes our sins, but it does not impart to us the strength to sin no more.”[2]

However, if we wanted it, we would be able to, for the will of man is granted freedom after Baptism—to sin or not to sin. But tears after Baptism erase the sins we have committed. Tears of compunction are more than the Baptism, for they cleanse all our sins committed after Baptism and make us clean.

There are several types of tears. If you have tears, consider carefully which of them are good, which are medial, and which are from Satan.

Good tears flow from love of God. They nourish man, bringing great joy to his soul—and whether a man eats or does not eat, if he weeps, he is satisfied. These tears curb hunger and thirst, and man does not become angry at anyone. His soul ever rejoices, because he has love for God.

Hear what the holy apostle Paul says: Rejoice in the Lord always: and again I say, Rejoice (Phil. 4:4).

Man weeps, growing weaker all the time, because tears of this type are born of fear. He fears the tortures of Hell, fears God, and therefore he always weeps, and his body withers, whether he eats or not, whether he sleeps or not. These tears have the power to drain human nature due to sorrow over sins, as fire dries timber.

The third type of good tears is tears born of the fear of death and the fear of the Judgment, when man thinks about how he will die, how he will suffer, how arduous it will be to part with his body, how grievous it will be on the day of Judgment, when he will stand before the myriads of angels to receive the ultimate answer about where he will go now—to Heaven or Hell—that God would not give him to endure eternal condemnation. Thus, these tears are also good.

There are also tears born of vainglory. These are bad tears. For example, someone has the gift of tenderness, but he weeps because he likes when others see him. It would be better were he never to weep, for Satan purloins these tears from him. Man should hide his gift of tenderness if it is from God. But the devil also compels a man to weep when others will see him. If you cannot stop these tears, then you are not to blame.

If a man weeps with the intention that someone see him, or it pleases him that someone should know he is weeping, then these tears are from vainglory, and they are bad, and even deleterious.

And there are tears that flow from anger. Have you seen how a man, unable to take revenge on another, weeps from vexation? What grief he has—that he cannot exact vengeance on another, and he weeps bitterly. These tears are even worse than tears of vainglory. These tears are murderous and wicked, because he weeps, but his heart is squeezed by Satan, so that it pours forth tears of hatred. These tears are very heavy, and very sinful and satanic.

Another weeps from voluptuousness. He had a friendship with a woman or with someone else, and when he remembers her, he weeps. These tears are brought forth by the demon of lust.

There are also bad tears born out of loss. A man loses his money or his home, his land is taken away, and he weeps for his possessions. These tears also come from the enemy, because it seems to man that God is not taking care of him.

So, there are many kinds of tears, and they are not all good. Only tears from love of God, from fear of God, and from fear of death and the torments of Hell cleanse a man, enlighten him, and bring him nearer to God. The remaining tears, whether natural or evil, incur condemnation.

St. Dionysius the Areopagite says that evil, introduced by Satan, consists of the following: in mad desire, irrational anger, and facile imagination or fantasy.[3] Do you see what evil comes from Satan and all his servants? Mad desire, for they [demons] wanted to become like God; irrational anger, for they make haste, not hesitating to kill anyone, to take revenge, and to bring evil upon every one of God’s creations; and facile imagination, for they fancy themselves to be as God, forgetting that they were created by God.

Were it possible to deprive the demons of these three passions, they would again become angels, but these three evils make them demons. But if you could remove them from their existence, they would become pure again, as angels, as they were in the beginning. Elder Cleopas commemorated at Sihăstria Monastery, 18 years after his death (Video)
A memorial service was officiated by His Eminence Teofan, Metropolitan of Moldova and Bukovina. Tears of Sorrow, Tears of Joy
Fr. Ted Bobosh
Tears move the Lord of the universe, and in the spiritual tradition, tears in prayer and repentance are seen as a gift from God to us, which in turn move God to compassionately show mercy on us.
Comments
×