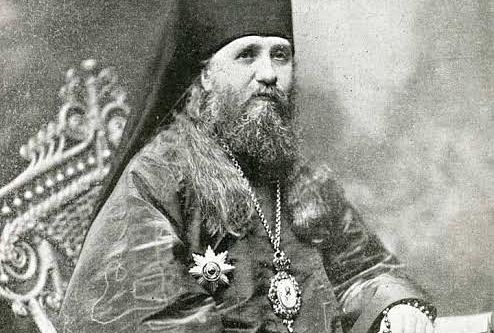 St. Tikhon during his tenure as Bishop, and later Archbishop, of North America.

In 2017, we mark the centennial anniversary of the tumultuous events that would radically alter the historical course of the Orthodox Church throughout the world, particularly in Russia and North America. The main cataclysmic event that precipitated these changes was the Bolshevik Revolution in Russia in late 1917.

The key historical figure for Church life in both North America and Russia at this time was Saint Tikhon, Patriarch and Confessor of Moscow, Enlightener of North America. During his archpastorate in North America from 1898 to 1907, he tirelessly traveled throughout the continent and always made time to meet with local clergy and laity to discuss the most pressing issues of Church life. Out of these gatherings arose the idea of an assembly of clergy and laity from throughout the North American diocese. Held in 1907, this assembly, which would later become known as the First All-American Church Sobor (Council), focused its deliberations on the theme “How to Expand the Mission” and made crucial decisions regarding the administration. This Council was the prototype for the All-American Councils, which continue to be regularly convened as the highest legislative and administrative authority within the Orthodox Church in America. Saint Tikhon also laid out a vision for a local, administratively united, autocephalous Orthodox Church in America ministering to all ethnicities. For a decade after Saint Tikhon’s departure to Russia, it was only the Russian Church that continued to have hierarchs residing in North America. It was, in part, the events of 1917 in Russia that led to the appointment to North America of hierarchs from other Orthodox Churches throughout the world and the establishment of the various jurisdictions that exist today. While the administrative unity of all the Orthodox in North America has yet to be achieved, there are various efforts towards this goal being undertaken, and the Orthodox Church in America remains steadfast in embracing Saint Tikhon’s vision of unity. 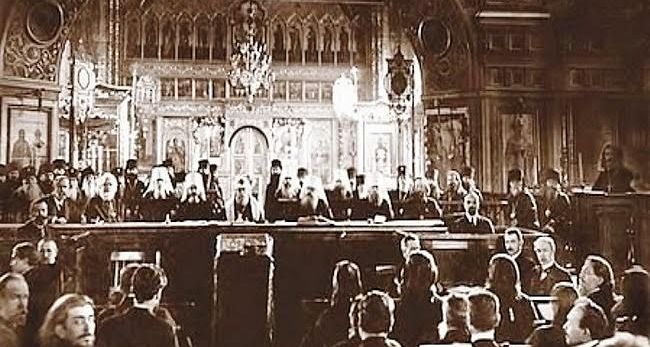 St. Tikhon at the All-Russian Council after his election as Patriarch of Moscow in 1917. 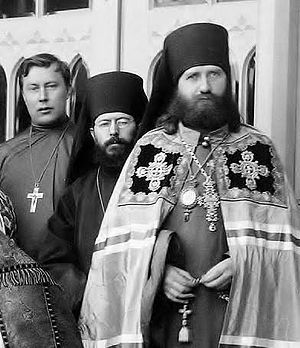 St. Tikhon with [from left] Sts. John Kochurov and Sebastian Dabovich during visit to Midwest.
After leaving America, Saint Tikhon led the ancient Diocese of Yaroslavl for nearly seven years before he was transferred to Vilnius, Lithuania. After the fall of the Czarist Regime in early 1917, the election of diocesan hierarchs by dioceses was instituted; up to that point, hierarchs were appointed by the Czar upon the recommendation of the Holy Synod. Saint Tikhon, then residing in Moscow after evacuation from Lithuania due to the ravages of World War I, was elected Archbishop of Moscow by a diocesan assembly in June 1917. He was raised to the dignity of Metropolitan in August of that year at the opening of the All-Russian Church Council, which was finally able to convene. This Council had been in preparation for more than a decade, but its convocation was opposed by the Czarist regime. Saint Tikhon was elected chairman of the Council. The most important decision of the Council was the restoration of the patriarchal system of Church governance that had been abolished by Czar Peter the Great two centuries earlier. Saint Tikhon was elected by lot on November 5/18, 1917 to be the Patriarch of Moscow and All Rus and was enthroned on November 21/December 4. By then, the Bolsheviks had toppled the moderate provisional government and seized power. Saint Tikhon and the Russian Orthodox Church were soon faced with unspeakable persecution by the new government. He humbly endured the oppression of the Church, but guided it through all difficulties with grace, dignity and wisdom. Although most of the groundbreaking decisions of the All-Russian Council to restructure many elements of Church governance could not be implemented in Russia after the Bolshevik Revolution, the spirit of these decisions continues to influence the structure of Church life within the Orthodox Church in America. 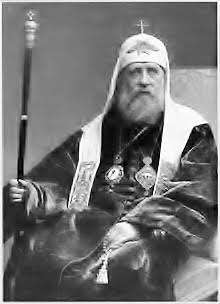 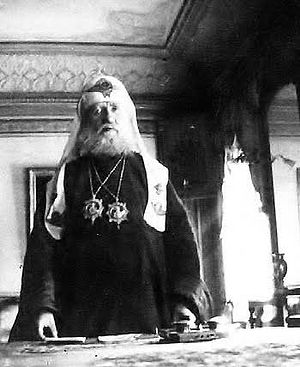 Prior to his repose in 1925, St. Tikhon endured house arrest at the hands of the Soviets.
The oppressive burdens of patriarchal ministry under the totalitarian Soviet regime undermined the health of Saint Tikhon, and he reposed in the Lord at the age of 60 on March 25/April 7, 1925. It is significant to note that despite controversies and divisions that enveloped the Church in the 20th century, Saint Tikhon was the one uniting figure who was considered irreproachable; he was respected and venerated by all sides. He was glorified among the saints by the Russian Orthodox Church Outside of Russia [ROCOR] in 1981. During the Millennium celebrations of the Russian Orthodox Church held in Moscow in 1988, Metropolitan Theodosius, Primate of the Orthodox Church in America, in an address to the Local Council of the Russian Orthodox Church, urged the Russian Church to officially recognize Patriarch Tikhon as a saint. Some in Russia, including hierarchs, criticized Metropolitan Theodosius for this public pronouncement, because they felt that the mere mention at that time of the possible glorification of Saint Tikhon by the Moscow Patriarchate could be perilous for the Church in the Soviet Union. However, less than 18 months later—in October 1989—conditions for the Church in Russia had changed and Saint Tikhon’s glorification took place in Moscow.

May the example of Saint Tikhon’s holy life and vision continue to guide the Church in the 21st century.

O Holy Father Tikhon, pray unto God for us! Centenary of enthronement of St. Tikhon of Moscow to be celebrated with transfer of his relics The Quiet Courage of Patriarch Tikhon
Georgiy Velikanov
Patriarch Tikhon, without a doubt, was a “point of intersection” for all the Russian Church’s modern history. At him intersect all the different paths chosen by hierarchs and simple believers.
Comments
×