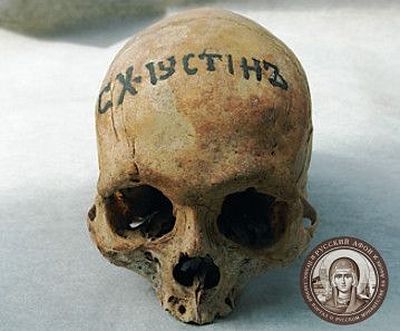 Schemamonk Justin was born in 1785 in the city of Kineshma in the Kostroma Province. He was devout from his youth. Although he was married as a young man and had children, the seed of piety in his God-loving heart ripened over the years in a manner perceptible to others. Distinguished by a tranquil disposition and commitment to the Church, as a man of God, he enjoyed respect among people, and already in his youth began to acquire the experiential discernment of the elders.

Thus, his life flowed in feats of piety until forty years of age, when in 1825 the grace of God indwelling in him was manifested to all. In Taganrog, while working in the fields, Fr. Justin saw a fiery many-branched tree descending to the Earth from the split Taganrog horizon. This was repeated several times: It ascended above, and descended below.

Not only he saw this unusual phenomenon, but around thirty other laborers from the local residents who were with him and before whom Fr. Justin interpreted this phenomenon as a sign of the death of their master. He foretold the exact time and place of his repose. And the master truly did die. Once everyone learned the details of his death, it turned out the prophecy was correct.

From that time, Fr. Justin, longing for the solitary life, and with the permission of his landlady, the widow of the deceased master, built himself a hut in the nearby forest. In this hut, in complete seclusion from the world, in daily podvigs, in attention to himself, with preservation of his conscience, he conducted the next thirty-five years of his life, which passed for him quickly and quietly. With prayer, in gratitude to God for everyone and everything, day and night he abided in prayer, in work on the purification of his heart, in battle with the passions and lusts, and further, in battle with the demonic powers.

The servant of God labored over himself in self-mortification for the sake of the Lord, for the salvation of his soul. One day, during one of his prayerful states, when he, contemplating the nature surrounding him, came to know and with his entire soul glorified the Creator of all, suddenly a swarm of bees began to circle, at first over him, and then over his hut. Having circled several times over his secluded hut, the bees descended to his window and began to arrange their dwelling on it. It was strange that not only did he not hear their usual sound, but nothing at all.

“I came out,” Fr. Justin later said, “to them, and as soon as I got near, they started flying around my head, traveling all around my whole body, and I started patting them with my hand. And they, my bees, tenderly answered me in their own way. I would sing sacred chants, especially ‘It is Truly Meet,’ and the bees would begin to buzz in a nice, sweet way. They were a special, unusually large type.

In such spiritual delight and gratitude to the God Who takes care for everything, many days had already passed in my battle for salvation. And then suddenly my bees, I saw, began to show restlessness. Then one after another began to leave the window and fly away. I left my cell in bewilderment, and, to my great regret I saw that their entire mass was circling over my head, rising higher and higher, until, finally, they had completely disappeared from view. Three days after that, the manager of the estate moved my wooden hut to the village to be a bathhouse, and he assigned me to the church warden. But I could not fulfill this obligation with due diligence, and so I asked for a passport and headed for Holy Mount Athos.” 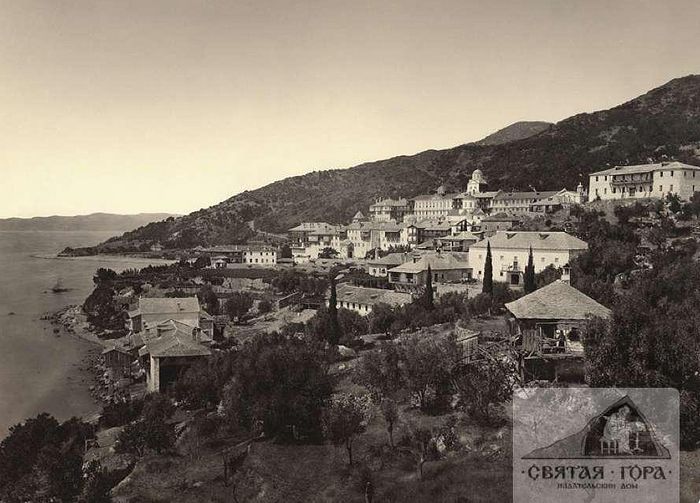 It was 1859. Fr. Justin entered the Russian St. Panteleimon’s Monastery on Mt. Athos, where he lived in podvigs of monastic self-renunciation for nine years until his blessed repose. He never once left the territory of the monastery this whole time. Only in the very sunset of his days did he think to venerate and pray at the sacred Athonite objects. And this eighty-two-year-old elder, with the blessing of his spiritual father Fr. Jerome, knowing neither the terrain nor the Greek language, blessed by the One God, set out on foot.

Upon his return, he said that everywhere, no matter where he visited, he was hospitably received. But, drawing near to the spring of St. Athanasios, he grew ill due to his great elderly infirmity. A random passer-by that happened to be there told him he would die, but, gathering his last strength, he somehow crawled all the way to the spring, and as soon as he poured the water, flowing in abundance there, over himself, according to the command of the Mother of God to him, he immediately felt such strength in body that he even began to overtake the fellow traveler who had condemned him to death. They both thanked God for the miracle that had been worked. 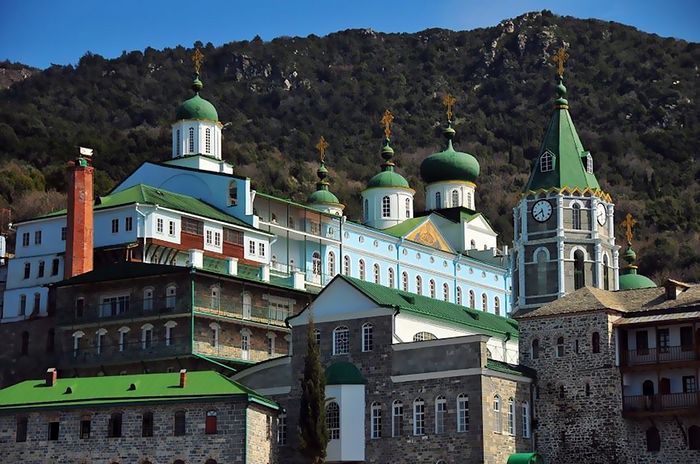 But there, at the spring, there occurred another, apparently, trifling circumstance that shows to what degree the man-loving God fulfills the desires of His elect. Fr. Justin collected some healing water from the sacred spring in a glass container he had. Approaching the monastery, he noticed that the container was leaking. With sorrow and heartfelt regret that he hadn’t managed to bring the water back, the elder returned to his cell, but then the miracle happened: Picking up the cracked bottle, he suddenly noticed that it wasn’t leaking anymore. The crack, by God’s command, disappeared. And the water did not diminish in it for three years, although until his very repose, in telling about this miracle, the elder would give some of this blessed water to everyone.

In 1868, the blessed elder began to noticeably weaken, until finally he reposed on November 25/December 8, as a candle burned to the very end, not extinguished, leaving the eternal memory of himself in the heart of the brotherhood. This is what Archimandrite Michael (Kozlov) wrote in his journal on the day of the elder’s repose: “He was distinguished by extreme simplicity. He led his life in temperance and was zealous in monasticism. He said he was never treated for anything, not even blood-letting even once; he considered even the most minor medicine to be a sin, saying, ‘If it pleases God for me to be healthy, then He will heal me Himself without any medicine or human means. And if it pleases Him that I fall ill or even die, let His holy will be done.’

“Fr. Justin was a tall, physically strong man, having heavy gray hair on his head and beard. His face was clean and pleasant. I respected this elder for his simplicity and often visited his cell. He got sick before he died, his physical strength gradually beginning to weaken, without any appetite, and it was all his illness.” Schemamonk George from the Old Russikon, a Disciple of Elder Joseph the Hesychast
Ilya Kabanov

Schemamonk George from the Old Russikon, a Disciple of Elder Joseph the Hesychast
Ilya Kabanov
“Who can describe the joy of union with God? It is joy unspeakable, it is ‘Christ is Risen’ for our entire lives…” Fr. George said. The Anarchist With the Green Mohawk
Monk Niphont

The Anarchist With the Green Mohawk
A story of one soul’s healing on the Holy Mountain
his happened in the monastery of Vatopedi, when Elder Joseph “the Younger” still lived there. It was late November. I was then fulfilling the obedience of guest master. In those days, there were conflicts arising in the Polytechnic University in Athens between students and police. Athonite Stories from Fr. Savvaty
Olga Rozhneva
The monastic republic of Athos is inaccessible for women. But I can listen to stories about Athos from my first spiritual guide—Igumen Savvaty. Fathers from the Monastery of Saint Paul who have been found worthy to see Our Most Holy Lady here on earth (Elder Andreas, former Abbot)

Fathers from the Monastery of Saint Paul who have been found worthy to see Our Most Holy Lady here on earth (Elder Andreas, former Abbot)
Many monks, giving their lives in dedication to the Lord and His Mother on holy Mount Athos have been vouchsafed to see the Mother of God herself. On Elder Kallinikos the Vigilant
Archimandrite Gabriel Dionysiates
The blessed monk lived for some 55 years in the desert dwelling of Saint Yerasimos the Younger and entered upon the sleep of the just there at the age of 77, in the year of our Lord 1930. St. Silouan of Mt. Athos: “I have many sorrows of my own, and they are my own fault…”
Roman Savchuk
There are moments when it seems that circumstances are indeed beyond our power, when life breaks down and it’s painful even to look at the world around us. Reality is cruel, and the soul can truly become sick. And no one knows when sorrows will knock at doors of the heart. But we must know in that moment how to answer these unawaited guests…
Comments
×