On Hope and Despair

From a conversation with a contemporary Athonite monk

Some lay guests complained to a monk of one of the Athonite sketes that worldly commotion, difficulties, and problems deprive them of all their time and strength, causing them to despair, and they didn’t know how to save their souls in such conditions. Having heard the monk’s answer, the guests asked permission to publish his words, believing they could be interesting and useful for a wider circle of Christians. The monk agreed, asking only that his name not be mentioned as the author, because, as he explained, everything he said is the teaching of the Church, the Orthodox spiritual tradition, and not his own personal idea. Fulfilling this easy request, here are the soul-profiting words of the Athonite monk. 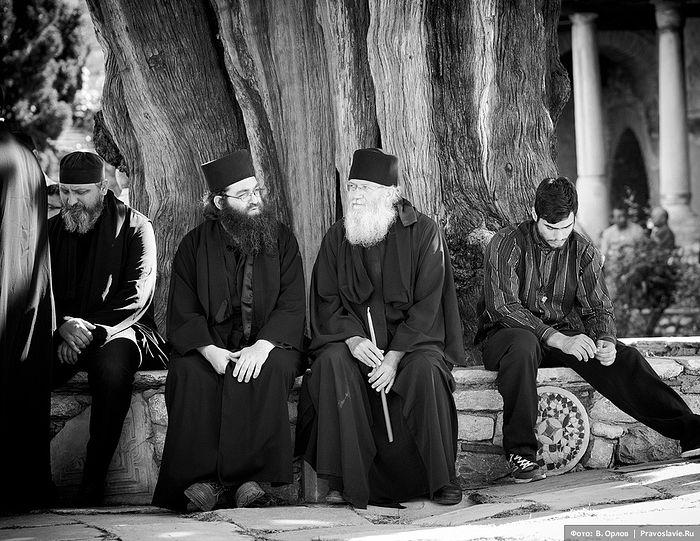 To become stronger, let us remember the lurking, unexpected disappointment, the troubles that suddenly fall upon us, the obstacles which we are not able to foresee, the unexpected joy elevating us to Heaven as if on wings, the suffering that invades our soul, like a tempest… Suffering bows our heads lower and lower, but only with its help are we able to know true peace and become strong.

We are given Divine weaponry for the salvation of our souls: prayer, especially mental,1 fasting, constant confession, Divine Communion, reading the word of God and the ascetical books of the holy fathers, renouncing everything that tears asunder our connection with God and removes our minds and hearts from the Lord and His holy will. The most important thing is the remembrance of death (in monasteries, especially on the Holy Mountain, they especially appoint a monk to go around to the brothers’ cells in the morning and say, “Good morning, brother, remember: We shall die…”).

Therefore, I don’t believe there is any man who does not know of his capabilities and his “weaknesses!”

There was a case where one young, inexperienced monk fell into a serious sin of the flesh. Grace departed, he was seized by grief, he lost hope in God, he despaired of his salvation, and of life in general… He gave up his prayer rule and didn’t know what to do, barely moaning, “Christ, enlighten me!” He decided to go to Confession to his elder and reveal to him his sorrow. He arrived, confessed, and told about how he had lost hope in salvation, that despair clenched his heart like a vice…

“As much care as you give, so much fruit you will reap,” the elder said, and told the fallen monk this story:

There was a peasant that had a field. It was far from his home, and so the farmer completely neglected it. The land was overgrown with weeds. Then he called his eldest son and said to him, “Go and clear out our far field—you can’t even see it anymore.” The son agreed, and the next day he saddled his donkey, gathered his tools, and headed for the field. But what did he find? Mother of God! Instead of a field—some impassable jungle of overgrowth and weeds. The young man tossed up his hands. “No, this field will never be cleared” he decided, and he lie down in the shade of a tree, and fell asleep from grief. Despair intoxicated him like a drug. Having slept the whole day, wasting the time in vain, he returned home.

“Well?” his father met him, “Did you clear the field?” “No, papa,” the son answered, “I didn’t do anything.” “Why not?” “It’s impossible. There’s so much overgrowth there, and weeds, and grass… I didn’t even know where to begin.” “So what did you do all day?” “Slept.” “Ah, and is it not shameful for you, a grown man?! I thought you were smarter than that… Tomorrow, go again, and clear just a small section, the size of your height. Once you’ve cleared it, then go to sleep.”

The next day, the sun hadn’t even risen yet, and the young man was already wielding his pickaxe. In ten minutes, he had cleared a small section of the field, the size of his height. It inspired him. “A good beginning is half the battle,” says an old proverb. The work went well, and the young man worked fervently, willingly. His despair and gloom were gone!

In the evening, he returned home, satisfied.

“How did it go?” the father asked the son. “I cleared thirty feet! I’ll be completely done in just a few days!” “You see,” the father said, “if we lose hope, then despair and sorrow will eat us from the inside like worms … They won’t let you lift a finger or shake a leg.”

And indeed, the field was completely cleared of weeds within a few days.

“Do you understand what I’m trying to say?” the elder asked the despairing monk.

“I understand, Father,” he answered. “I must purify my soul. But how should I start?”

“You have already begun, brother. Confession is a good beginning. The Lord has forgiven you your sins. But it is His gift, and you should offer something from yourself.”

“Of course, Father!” the young monk exclaimed fervently. “What should I do now?”

The monk looked at the elder with surprise: “I am a sinner—and I’m going to commune?”

“Yes, brother, soon. For now, your main task is to kill the demon of hopelessness and despair!”

“That is, Father,” the young monk asked, “you’re saying I can become a good Christian and monk?”

“Of course, brother. As sure as we’re seeing and speaking with one another right now.”

Then the monk fell to the ground and kissed the feet of the elder: “I don’t know how to thank you, Father,” he said. “You have given me Heaven. My hope has returned, and my soul is full of joy and light; despair has vanished, and in my heart there is Paradise!”

The Athonite father finished his story with a quote from Holy Scripture: But they that wait upon the Lord shall renew their strength; they shall mount up with wings as eagles; they shall run, and not be weary; and they shall walk, and not faint (Is. 40:31).

1 This refers to the practice of meditating upon the name of Christ in the Jesus Prayer: “Lord Jesus Christ, Son of God, have mercy on me, a sinner.”
See also A Priest’s Thoughts on Depression, Anxiety, the Soul, Your Body and Your Brain
Fr. Stephen Freeman

A Priest’s Thoughts on Depression, Anxiety, the Soul, Your Body and Your Brain
Fr. Stephen Freeman
Somewhat problematic, I think, is the not infrequent distinction made between anxiety and depression as physical/medical problems and as so-called “spiritual” problems. There is no such distinction. We do not have “spiritual” problems that are not also physical problems, simply because we do not exist as some sort of divisible creatures. Psychogenic Depression: The Orthodox View
Prof. Dmitry Avdeev M.D., Ph.D.
It turns out that the main origin of neurosis is not stress and troubles, but a person’s personality. And this personality is internally upset. Sin, as the root of any evil, brings neurotic disorders with itself.
Comments

Francois12/18/2017 4:47 am
It is always wonderful to learn from monk's experience and allegories. But it does not always work unfortunately.
Again this monk, as so many of his fellows, doesn't grasp the layman's life in contemporary world. The despair and unfortunate weakness these laymen experience are NOT the despair he talks about. It is not the despair over one's possible forgiveness, or abyss of one's sins. It is not despair about God's love and presence. It's probably more despair about action, communication with others, feeling of solitude, impossibility to move ahead and do anything else than survive. Each monk has made once in life a choice, layman has not and therefore faces everyday an unseen choice.
×